A PB for you and a PB for me

By David and Sharon on 4 February 2007 david sharon 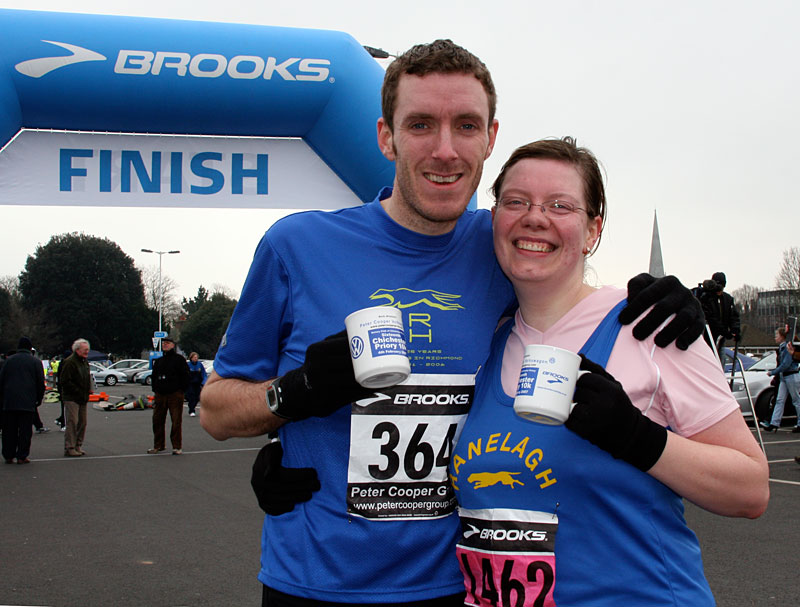 David and Sharon, after the finish

Today was the day of the Chichester Priory 10k race in West Sussex. I’ve been looking forward to this for quite a few months now (as it’s a race only a few miles away from where my parents live - i.e. free board and lodgings!) and it’s a pretty flat course. With the trouble I’ve been having with my hip, I feared I’d be giving this one a miss, just like with the Goring 10k a month ago.

The weather this morning was beautiful and Sharon, my mum and myself drove the course first thing to see what we were up against. It’s always good to know what the course is like, especially regarding hills! There were a couple of short inclines, but nothing worth worrying about - Sharon and I have seen plenty worse.

I think there were around 1800 runners (when the results are published I’ll confirm) and the weather clouded up before the start - winds were light and it was perfect weather.

For me I’d planned to take it fairly easy and run it in just a little under 50 minutes. However, anyone who knows me and my running knows that I cannot run as slowly as I would like in a race, so after running the first couple of kilometres I was on form for a good run. I felt comfortable and just wanted to cruise round without killing myself whilst all the while keeping an eye on my hip, as I’d not run this distance on the road since early December. The last two kilometres are gently downhill, with the final Km being slightly steeper - by far the best way to finish a race! I crossed the line according to my watch in 43:23 - not bad at all on little training (the official time I think will be about 15 seconds slower). I’m really happy with this, and its much better than my 44:26 personal best at the Bognor Regis 10k last May.

The best thing about all of this it is that my hip is not giving me the grief I half expected it too. I remember being in right pain after the 4 miler road race on Boxing Day last year, so doing 6.2 (or whatever it is) miles today was fine. Maybe it’s the lowered mileage I’ve been doing the past few weeks, and also my recently purchased Adidas running shoes. Time will only tell.

Chichester 10k Statistics - David Finally, before I sign over to Sharon for her update, I’ve had a bit of fun with Microsoft Excel and put together a graph showing my kilometre split times compared with my heart-rate, clearly showing that putting a little extra effort in makes you run faster (I don’t think I’ll get any awards for that statement)!

Sharon here now, for my race report. I had felt OK about this race most of the week, although I was worried about how my foot would stand up to the distance. I know that A&E said there was no break but it has been really sore. Anyway, I went to the back of the field (to the 50 mins and more section) and we made our way to the start line. I have to confess that it really annoys me that it takes so long to get over the line and so you lose so much time on the “official” time. I guess the only way to get around that is to run faster eh ;) I had two goals for this race - to run the whole thing (the hills at Goring saw me walking a little bit a month ago) and to try to do it in under 70 minutes.

I didn’t enjoy the first two kilometres really, it was in a residential estate and people we really squashed in. My other bugbear is people running with MP3 players. I understand when you are training, but in a race? It simply means that they are unaware of anything around them, including cars - and they are missing out on the atmosphere of the race. Plus I went off too fast, first km in 6:15, faster than my BPTT first kilometre pace. Anyway, we carried on and soon enough reached the halfway mark. I found kilometre 5 to 6 really quite hard and knew that the only “hilly” hill was at the 7km point and my plan was to push up the hill and try to overtake a few people. I found my legs again and indeed overtook four runners, which was a good mental boost for me. Just because I’m not very fast doesn’t mean I don’t plan my race you know.

Before I knew it we were at the 8km point, thank goodness! All I could think was that it was less than the cricket pavilion to the finish at the BPTT and I could do that. When I reached the 9km point, I was there in exactly one hour (by my watch), which was pleasing to see.

As I came around the corner into the big car park where the finish was, I heard David and his Mum shout, “Come on Sharon” and I really tried my best - in fact David managed to get a photo of me with a foot properly off the ground! I finished in 67 minutes or thereabouts according to the timing thingy by the finish line but by my watch (after all the time it took to get to the start line) it was 65:50! A PB by over 6 minutes, which I am really pleased about.

The marshalling was excellent, I thanked lots of them on the way around. They didn’t clap - except the marshalls on the 7km hill who were very encouraging of us slow-coaches. This is one race I would be keen to do again next year.