Ten miles in the sunshine

Sunday 15 April was the day of the Thames Towpath 10. This is a 10 mile run, starting and ending in Chiswick in West London with much of the course run on the (bumpy) towpath that runs beside the Thames. Sharon and I had both entered this race, as its great preparation for the shorter 10k’s we entered in May and also because you get a great momento when you finish - a lovely glass.

The weather was absolutely beautiful, apart from the heat! Today was the warmest day of the year so far in England, with the temperature peaking at over 26 degrees in the South-East of England. The start time of 9:30am was in our favour although it was still extremely hot. 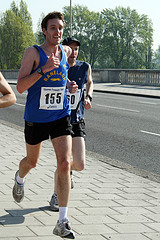 After a couple of laps of the sports-ground where the race began, it was onto the road, and a mile or so in then onto the towpath. I (David) had an excellent run and managed to pace myself really well and ran consistently throughout. The final mile was quicker but you always seem to dig deep in those final minutes.

My first 10 mile race was the Cabbage Patch 10 race held in October 2006 where I clocked a time of 71:47. Today I smashed it with a time of 67:36 - over four minutes quicker than the same distance in October. My overall position was 42nd out of 472. The entry limit was around 600 runners but I guess the weather put quite a few of them off, or more started but didn’t all finish.

Running for my (first claim) running club - Ranelagh Harriers - I finished second out of our club runners which I’m really really pleased with (and some!). 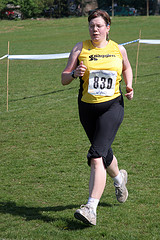 Sharon here now, just about able to keep my eyes open long enough! I had a plan which involved two main goals - to finish under two hours and to not be last! I managed both, my finish time was 112:08, so quite a bit under the two hours.

It was hard, the heat didn’t help me but Jane and Deb did! I know them through the running clubs we belong to and they helped me until just around 7 miles when I couldn’t keep their pace any longer (I had started out doing just over ten and a half minute miles, which over that distance was too quick for me). I finished a bit under three minutes behind them. I have to admit the eight to nine miles was the hardest thing I think I have ever done in my whole life. How I kept going I just don’t know. Somehow I did and when I saw the nine mile marker I was overjoyed. I was 453rd out of 472, many of you who read this will think “ppfffffftt how rubbish to be so far down the field” but for me, it’s pretty darn cool…this time nine months ago I hadn’t really run a step and here I am doing a ten mile race!

At this point, we feel it is prudent to say a HUGE thanks to our friends who came out to support us today. Kirsty, Danny and Orlando who were there on Chiswick Bridge at the start and then at the finish. Nicola deserves an extra special mention for being at several points on the run (not least the foot of Chiswick Bridge return journey with Stuart who had run the race himself!), she was so encouraging :) Paula and Charlie were also a welcome sight towards the top of the Bridge with about half a mile to go. Angela was spotted taking photos and supporting at a couple of points along the way too. Thanks everyone. The best thing was a lady running alongside me at around the first mile where the support was loud, she was most impressed that we had people cheering us on. Some photos of some of “the gang” can be found at our gallery. After the run, we went to the pub for lunch and a few gallons of liquid…then back to play on a Nintendo Wii, *most* amusing! Kirsty won the ten pin bowling, Danny and I beat Kirsty and Orlando at tennis, David beat Danny at boxing, I beat Kirsty at boxing, Orlando beat Danny at baseball and then the golf was a draw between the two D’s. Great fun.

Oh, and as an aside, I think my middle toenail will come off as a result of today. The running, that is, not playing on the Wiiiiiii.