OK, so David has tasked me with writing a bit about the 10k race we did on Sunday (20 May)…here goes!

We were down at the seaside at David’s parents for this race and took our pal Danny along too (it was a deal, we would run the Sutton 10k two weeks ago and he would run Bognor). The day dawned bright and a bit too sunny but with a gentle cooling breeze. We had checked out the course the day before, so knew there would be no major course surprises, although it did seem an awfully long way when we drove it! After a little jog warm-up, two visits to the little girls room (well, dodgy old portaloo!), we were off to the start. The timing sections (kind of like “starting pens”) seemed to work really well, as did the chip timing. No doubt David will chip in (pardon the pun!) later with his race report but here is mine: 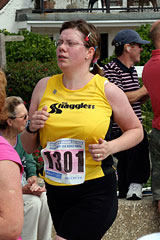 I kind of had a plan but wasn’t sure it would work as it was pretty hot by 10.30am - and I am not good with the heat. I hit the first km at 6:00 and wondered if I have gone off too fast, I lost the 2km marker and got to 3kms *way* behind schedule, which worried me as I thought I was running at a reasonable pace. The 4km marker came round quickly though and it was then obvious that the markings were a tad squonky! I reached halfway in 30:46, much slower than I had hoped for. Hmmmm. My plan was going out the window and I thought there was no way I was going to get a PB, which fleetingly made me a bit annoyed. Anyway, I was going along at a lovely pace on the prom, when at about 6kms I suddenly felt really good. I took the chance to up the pace a bit and off I went. The next couple of kms involved going past our sailing club and also David’s mum who was marshalling on the course, just before the 7km marker. I realised that I was about to hit my least favourite part of the race, km 8-9. What would happen? Would I fall apart (again!) like I have done before? Funnily enough, I didn’t. I started to catch people.

I reached 9kms and saw David and Danny both cheering me on, shouting, “Go on, chew em up”. Danny took that opportunity to tell me he had already broken his medal which made me laugh (and I am sure cost me a vital millisecond ;) !!). I carried on catching people and the last km was 5:30, amazing for me, I overtook about 40 people I think! I finished in a new PB of 60:32, tantalisingly close to the sub-60 minute barrier. Nicola said to me a few weeks ago that it is good to finish close to a target time as it gives you something to aim for and I really will aim for it now. A sub-60 10k was my target for the end of the year, but I hope it will be sooner.

I absolutely *loved* this race. I felt the most comfortable I have felt so far in a race (I know I haven’t done many but still….) and I will definitely be back next year. David finished 50th in a new PB of 39:27 and Danny finished in an amazing 8th place overall!

Oh and Hollywood, I was sooooo glad to be able to finish in a combined total of 100 minutes (by one second!!). Onwards and upwards, here’s to the next race - which unfortunately is 10 miles not 10k and on a hilly course. Methinks it will be tough :)

David here….I’m going to try and be quick with my report. I agree with Sharon that the starting “pens” worked really well, and this year I was even nearer the front for the start - there was plent of room for me to keep warm before the start which was good.

The first k was done in around 3:50 which I was pretty happy with as I thought I may have set off a bit fast with all the faster people in front of me. From here on in my plan was to run steady till about 6k and then see if I could push it a bit more for the final part. 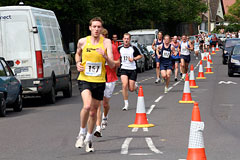 It was fairly quiet where I was running - although quite a few runners around, there was plenty of space to move and find a decent line to run. There was little opportunity to draft off of people, so much of the race was run with no “assistance” from others.

At the 5k mark (however accurate it is!) I went through at around 19:30, which was spot on what I wanted to do. I felt good and was ready for the second half of the race which is mostly along the lovely scenic promenade. *update* the 5k time was actually 19:45, which makes more sense. Skipping the water stop at about 5.5k (I wasn’t really thirsty then) it was onto the promenade. I got past a handful of people on this stretch and enjoyed running past all the people supporting (at the sailing club, and also mum and dad who were a little further on).

As I headed towards Bognor Pier it was really getting tough. I felt that I was pushing things harder, but still manageable. I made a couple of strong surges to get past people (and make some room behind me to demoralise them - its all about tactics you know!) so that they think twice before trying to make an attack. :)

As we headed to the final 1/2k and finish I really started to kick and managed to get past one of the local club (Tone Zone) runners. Turning into the final straight I heard a “Go on David…Go on David Rowe” from a friend who lives right by the finish (cheers Bob), and also some support from friend Rob, who was also there (he’d cheered me on earlier in the race). 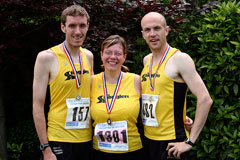 Although my first 5k was 19:30 (*update* 19:45) and I felt I pushed harder and ran faster the second half that clearly wasn’t the case, but I’m still really happy to have been very comfortably sub-40 minutes. Its a fast flat course so won’t be reflected on every 10k I do, but its one I’m really proud of.

I’ll certainly be back next year, and I’d like to now publicly state that I want my time (weather permitting) to be sub 38 minutes. Its going to happen…you just wait and see :)

Photos from the race courtesy of David’s dad are at Sharon’s photo gallery site.