By David and Sharon on 12 August 2007 david sharon

Sunday was the day of the Belgrave 5k - which marks the final day of the series of races that make up the 2007 Surrey County Athletic Association road league, but more significant to Sharon and myself (as we’re not super fast), the Ranelagh Harriers 2007 Road Grand Prix series of races.

After racing since April at distances up to half marathon, today was the shortest - at 5k (3.1 miles). Although short, racing this distance is tough - you need to be 100 percent on the ball right from the start and push like there’s no tomorrow. Any mistakes and you just don’t have time to correct them.

The race was run in a lovely residential area near Wimbledon in South-West London. Over 200 runners took part in what were ideal weather conditions. The only thing against us was “the hill”. The start is on a fairly steep uphill stretch - which didn’t level out for 0.6kms. Once at the top you then go into a flat out downhill of about 1.2kms. The course levels off for a little bit and then its back round the loop again - taking in the hill when you’re still shattered from the first time around but this time running the full length of it which is 1.1kms. This is the beauty of 5k’s for you - the pain never stops. This ain’t no “race for life” you know. 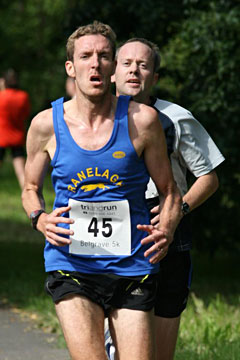 Because of the hilly nature of the course its impossible to think of doing kilometer splits in certain times - you just need to listen to your body and if its hurting, you run harder and if its not hurting, you might as well give up! Am I selling this one well?

Before the race a few of us were chatting and talking about strategies for the race. The best comment I heard was from Chris R from Ranelagh who said to me that his strategy was ‘not to run anywhere near me for at least 2k’s’ - as whenever he’s done that before he’s ‘blown up towards the end’. After the race he said he followed his strategy perfectly and didn’t blow up.

The first lap was fairly busy and in the second lap I spent the entire downhill section trying to hang onto a guy a few metres in front of me. In the final straight, with the encouragement of Alan and Liz I dug in and got past him and finished in a time of 18:15 - a personal best - 18 seconds faster than my best 5k time (at the Bushy Park Time Trial a couple of weeks previous). I finished 45th overall, and my race number was 45. Bizarre!

Before I hand over to Sharon, as I said previously this race was part of the Ranelagh Road Grand Prix and at the end of the series (of 10 races, 8 of which I ran in) I finished 5th overall - a result that I’m extremely proud of. 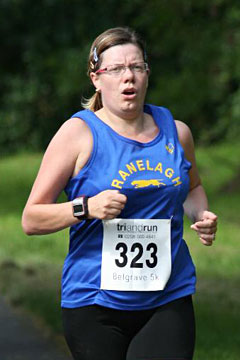 Sharon here now. On the way home today I commented to David, Danny and Kirsty that I couldn’t remember the details of the race today. I actually think that’s for the best given David’s report above! I overtook a couple of people and just tried to stay ahead of them, which seemed to work and I got a PB with a time of 27:01. Why I couldn’t get those extra two seconds to be sub-27 I don’t know. I shall save that for a BPTT in the (hopefully) not too distant future. All in all a tough race but thankfully the last of the Ranelagh Road Grand Prix in which, incidentally, I finished 6th woman - after completing 7 of the 10 races.