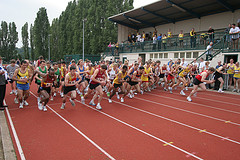 On Saturday lunchtime I (David) was one of the members of the Ranelagh Harriers mens team taking part in the Surrey Road Relay Championships. The relay race consists of six people - each of whom must run the 2.88 mile course and then ‘tag’ the next member of the team, who must do the same, and so on.

Although a number of the super quick Surrey runners were out of town (running the Bristol Half Marathon on Sunday) the field was very quick at the top, with some superb running to be witnessed.

In our team I was the sixth and final runner - this meant that I had to wait quite a while before I started (about 80 minutes), but the time flew by and it was great to cheer on fellow club runners. When it was time for me to start the runners had spread out so much I was completely on my own - in fact I only saw two runners throughout my entire leg - one at the very start and a second one about 300 meters from the finish. This is a good test of running against yourself, as you’ve no-one else to push you or pace with. I believe I managed it pretty well.

It was a pretty tough course - with a nasty hill just under a mile into the race - but overall I did enjoy it. I ran the course in 17:35, which put me as 10th finisher out of the 22 Ranelagh runners. In the overall results ranked in speed order I was 123rd out of 312 runners. For info the fastest time was 14:12 (over three minutes quicker than myself), by a member of the local running club (and ultimately the winning team) - Belgrave Harriers.