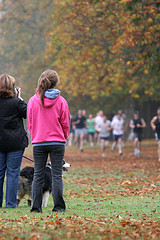 I (David) decided to watch the Bushy Park Time Trial on Saturday - this was the first time I’ve ever watched it and it turned out to be really enjoyable. Now that the 2006-07 points “season” is over I can now relax and run time trial as I please. I wanted to get a run in before the 10 mile race I’m doing on Sunday so chose to run to Bushy Park from home whilst Sharon followed in the car a little later on. I had a good 4.3 mile run and arrived at Bushy Park about 8:25. Sharon followed shortly and I could then get the camera from the car as I wanted to take some photos.

The start is just as crazy to watch as it is to be part of the action. Once the runners had gone past I literally had to run to the 1k point where I wanted to get some photos of the leading runners. Once they’d gone I was able to casually stroll to the finishing area and await the stampede! The winner raced home in a very impressive time of 15:07 with the second placed runner came in over two minutes later! Now, the gap is not normally this big, but with quite a few other races this weekend including Surrey League Cross Country the same afternoon then some of the faster runners were absent.

Sharon was also taking it easy (in preparation for Sundays 10 mile race), but she did run the 5k and did so in 28:32.

A selection of photos from the event can be found over at our photography website and the full set are in the gallery at the BPTT website.

Straight after the race we headed to the local cafe for our customary hot chocolate and chat, and then headed off to watch the women’s Cross Country race in Esher. More to follow…