So why do they call it Grim?

Last year, when I had only just started running, one of the BPTT regulars (Charlie) ran this bizarre race called GRIM. I decided in December last year that I wanted to run it - fast forward a year and one entry (made whilst on holiday in the warmth of Turkey) and I was on the start line.

This year, due to it’s incredible popularity, GRIM was run on Saturday and Sunday. The Saturday was apparently bright and sunny but cold. Sunday - unfortunately for me - was not so sunny. In fact, it was bucketing down with rain and after a quick stroll around in the rain, my support team (David and Kirsty, both wrapped up in waterproofs and approximately 26 layers!) decided they wanted to sit in the car until we *had* to get out. Of course, I agreed in the interests of not being totally soaked before I even started. 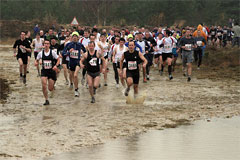 At 10:30, we were off. Running into the horizontal rain and a howling gale. Within about a minute, we were running through an ankle deep puddle - most amusing was that there were women around me saying, “Oh I can’t run through that” - I thought perhaps they weren’t aware of exactly the kind of race they had entered…

Quite early on there was a long-ish, steep-ish hill. All I could do was think, “Use my arms, use my arms”. The going underfoot was tough, kind of oddly rocky and I thought it would be OK to run on but was in fact quite awkward. Hey ho. Only 7 miles to go (!!) - and little did I realise that I would be glad of that surface later on! We met our first moderately sized puddle shortly after this, which took about 5 seconds to wade through. Oh my gosh. I couldn’t believe quite how cold how quickly your feet could get! When I emerged, my feet were totally numb, a very very bizarre feeling. Of course, at this point you are trying to run on feet which don’t feel like they belong to you whilst wearing shoes which appear to have suddenly started to weigh half a ton! This combo does not good running form make…hmmm…not least when you have to try to negotiate a cattle grid or three. I am convinced they were responsible for many an injury, I saw one lady who looked in a great deal of pain after an unfortunate cattle grid incident.

I carried on plodding along. Some boys around me were having a grand old time, rugby tackling each other into the puddles and generally having a laugh - which I think is the only way to tackle this race (unless you are in with a chance of winning it!). Before long I was struggling under a cargo net and then wading through more water again. What I did not realise was that soon I would meet my least favourite part of the race. Shortly after I had clambered under a second cargo net (who’s idea were they? Awful things!), we were suddenly in knee deep clarty clay/mud. Oh my goodness, it was hideous! I struggled through, narrowly avoiding being dragged in by a chap who fell next to me and grabbed onto me (obviously I shook him off quick smart! LOL! Every woman for herself!!). I have no idea how long the clay/mud section lasted for but it felt like miles. I was wishing for a knee deep puddle to wash off the knee deep orange mud - and soon enough my wish was fulfilled. 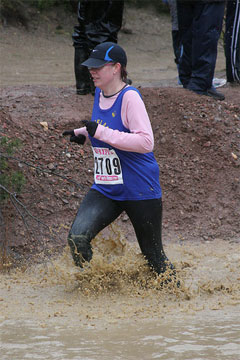 They had warned us before the start about the “puddle” at around 5 miles. It was deep. It was bloody freezing. It was orange. And it was fun!! I waded through, taking it fairly steadily as all around me people were tripping over little hillocks hidden under the water and falling into the puddle in a most spectacular manner. I don’t think I have ever felt so cold, or so unable to run in my whole life. As I clambered out, I honestly wanted to stop - my legs were like blocks of ice - but I kept going (of course I did, I am way too stubborn to let a piddly little 8 mile race beat me!). Unfortunately, the next couple of miles were pretty dull, no puddles, no mud, no hills to speak of…but I caught my breath thank goodness.

The mile markers got a little dodgy at this point - but before I knew it, I had passed 7 miles and was about to meet another puddle. It was around this point that a Fetch pal of ours “Footpad” ran past me…thank goodness he did as he was the man who saved me from falling into said puddle! I am sure that would have caused much amusement for David and Kirsty, “Style and grace, Sha, style and grace” was all I could hear! I am sure people around them must have wondered what they were twittering on about…

Before I knew it, I had finished. Actually, I say that, but it’s the longest finish ever! You reach the 8 mile marker and then it’s almost another half a mile before the finish line…so the GRIM 8 is a misnomer. I have a rather lovely brown t-shirt (makes a change from white for a race t-shirt) as a souvenir but I would obviously have preferred a medal. When I finished, I said never again. By the time I had eaten roast dinner, I was reminiscing fondly and thinking what fun it might be to do again in 2008…as an aside I finished in 1:30:38 (963rd place/1378 finishers).

David hasn’t been a supporter for me in a public race since January and we thought it might be fun for you to read his perspective on this race, as it’s even more of a spectacle for those supporting than it is for us running it. A big thanks to him and Kirsty for braving the elements and cheering me on. Here are his musings…

With the weather being as bad as it was on Sunday, even as a spectator/supporter you were exposed to much the same as the competitors were, but I wasn’t expecting any sympathy - especially as I was layered in warm clothes and was wearing waterproof clothing. Kirsty and I found our first vantage point about 400 metres from the start, where it was extremely exposed and with pretty much horizontal rain. We watched everyone run past - with many people looking fairly upbeat and quite a few really not sure why they were there in the first place! There were some terrible clothing choices made by some as well - tracksuit bottoms that just absorbed the rain - and this was before the waist high puddles - talk about making things difficult for yourself. The race pack sent to all competitors had clothing advice in there for a good reason - its just a shame that many ignored it. 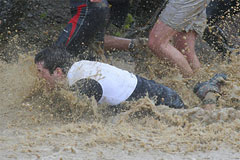 After everyone had passed us we were able to casually stroll (in the gale force wind) to a large water area which is about 5 miles into the course. We waited for about 20 minutes or so for the first runner to come through, and then a few seconds later the second, and before long there was a steady stream of competitors. It was most amusing as if you took it slowly and steadily the chances are you wouldn’t fall - however if you rushed things you were asking for trouble. Whenever anyone fell in there were cheers from the crowd of around 100 spectators, and I managed to capture a few great falls with my camera.

We then walked a couple of hundred metres to yet more ice cold muddy water where we could see people about half a mile from the finish - here there was plenty more of the same and Kirsty and I tried our best to encourage the competitors with phrases such as, “come on, this isn’t a walk in the park - its a race!” and, “you’re not auditioning for the ballet prancing through the water - get on with it”. Requests for the runners not to splash us as they came out of the water equally didn’t go down so well.

Overall it was a great morning out, and I think the event is perfect for spectators with some great vantage points close to the start/finish area and if I’m there next year I may well be a competitor this time. After returning home and leaving Sharon to have a hot bath and a rest, I changed clothes and went out for an easy 7 mile run with Kirsty and returned just before it got dark. Another long running-related day, which seems to be the norm in the Rowe household.

A number of photos that David took, showing some people getting very very wet can be seen at our photography website.