On Saturday afternoon Sharon, Kirsty and myself headed to north London on the train to go to Parliament Hill, which is on the south side of Hampstead Heath for the South of England Cross Country Championships event.

“Once known as Traitors’ Hill, it acquired its current name during the English Civil War when it was occupied by troops loyal to the English Parliament. The hill is around 321 feet (98 m) high and is notable for the excellent views it provides of the London skyline. It is possible to see the skyscrapers of Canary Wharf and the City of London, along with St Paul’s Cathedral and other landmarks, all together in one view, some of which are protected views.” - wikipedia.org 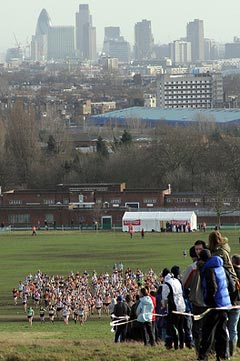 There were a number of races being held throughout the day, and we arrived in time to catch the under 20’s and 17’s womens race, which was convincingly won by Stephanie Twell, who’s been recording some fantastic results lately.

After the under 20’s men it was time for the senior womens race. Standing at the top of the hill watching 400+ runners come toward you is a very impressive sight. We cheered friends from Ranelagh Harriers and The Stragglers (including Kirsty) running clubs and it was fantastic to see the Ranelagh women finish 9th team overall with Clare King finishing 32nd. An absolutely fantastic run by Clare.

Just as an aside, this is what Time Out (London) wrote earlier in the week…

“The women’s 8k race is at 1.50pm, after which the infamous Parliament Hill mud should be nicely churned up by the time the senior men tackle their 15k course at 2.50pm.”

Whilst the womens race was taking place, Sharon took control of the camera whilst I got ready for my race. I was wearing 15mm spikes and Marc, a running colleague recently described the course to me as “…like a sponge. It collects all the rain for months on end and saves it up for one day - the day of the race!” I was soon to see how right he was!

Parliament Hill is the spiritual home of cross country running and I was really looking forward to it. Although I’m in the middle of marathon training I wanted to run this event, but sensibly planned not to race it hard. I just wanted to experience the course and the atmosphere and get a good training run in at the same time. The course was advertised as 15km, which is just over 9.3 miles!

About five minutes before the start I headed to the start line - which is absolutely immense. I have never seen anything like it before in my life. It was about the length of a football pitch and was crammed with runners. It was amazing.

The race started promptly at 2:50pm and the first thing you do after running on the muddy grass is head up Parliament Hill. There are people lining each side of the running area and as its really steep uphill you’re not running particularly fast and can hear all the shouting of encouragement. Sharon and Kirsty were in the crowd somewhere but with near to 1000 runners taking part they didn’t see me, nor did I see them.

As you head over the hill it goes into a relatively steep downhill, followed by the first encounter with some real mud! The ground for unforgiving, unbelievably muddy, and even with 15mm spikes you were still sliding around. 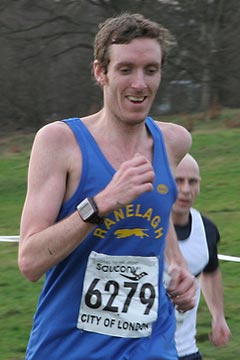 Kirsty, who’d raced earlier in the afternoon described the course as….

The whole route was either: a. uphill b. downhill c. muddy d. really muddy e. extremely muddy and stinky! f. on a huge camber g. full of holes h. in a bog or ditch i. into a gale force wind j. all of the above!

I think this description was spot on. I don’t believe there was any single piece of flat ground in the course and you were constantly twisting, turning, trying not to break your ankle or running through this sludgy mud! Superb.

Unlike a road race you get no opportunity to settle into any kind of pace - you’re constantly adjusting your running to the ground beneath you. Truly challenging stuff.

During the course there were two “bogs” I’d like to call them. About 20 feet long and about 20 feet wide this was just grey, wet muddy water and you had no option but to run through the middle of it. There’s no point trying to avoid the mud on a course like this - you’re going to have to resign yourself to getting very dirty. I saw a couple of people fall flat on their faces into the mud after misjudging the jump from the mud onto the path. 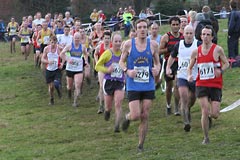 The senior mens course is three laps and I think I ran each of them fairly solidly. As I said I wasn’t racing although I didn’t want to drop too many places from the position that I’d established myself. In the third lap about a dozen or so people got past me although in the final straight after hearing a couple of people coming up close behind I pushed hard to maintain my position (and get past a couple of other runners).

Looking at the data from my GPS after the race, my times for the three ‘laps’ (based on the same start and finish point each lap) were 18:33, 19:29 and 20:07. The last lap did feel tougher, but then I was probably dragging round half the field on the bottom of my shoes!

After the race I inspected a lovely new blister on my foot - struggled to get my shoes off, and then a group of us headed back to Richmond on the train for a post race drink (non-alcoholic of course).

It was an excellent day out and I was able to follow it up with an easy 18 miles run into London and back on Sunday! Saying that however I believe I’m now suffering badly from DOMS (delayed onset muscle soreness) and will probably be taking two or three days off from running! 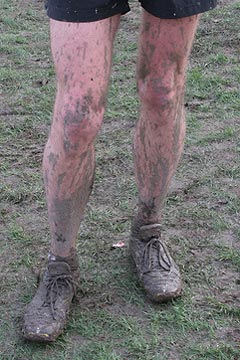 In the overall results (my name isn’t in the results as I ran using the running number of one of my running club members) I finished 418th out of 832 finishers in a time of 64:40. The winner finished in 46:16 and the last finisher came home in just over 1 hour 50 minutes. Following the race I found out something that I didn’t know before - that two time world snooker champion Ronnie O’Sullivan is now a runner (in addition to a snooker player), and he finished in 189th place, finishing just over seven minutes in front of me!