This was the day that David was meant to be running his first marathon. However, as you will no doubt have been reading, his torn calf muscle put paid to that idea. Unfortunately for Kirsty, she had foolishly entered the marathon with David and had no excuse, so off we set. I warn you now, this is quite long, so get a cuppa and settle down for a few minutes.

We had a lovely journey down to Bungay (or is it across?!), there was some trepidation regarding the weather forecast but we were in generally high spirits. Not of the vodka kind either.

We arrived in Bungay right on schedule. I had called the B&B the day before to warn them and spoken to Ye Olde Poste Officeeee Laydeeeee who on first meeting appeared as loopy as she was on the ‘phone! Kirsty took definite umbrage to Dusty the spaniel who obviously homed in on her fear of dogs and tried to make friends with her. Not to be, I’m afraid Dusty! A dinner in the “local” Italian restaurant followed the settling in and preparing of the super-juice for the next day. I say “local” because nothing in this part of the world is local, really it was about 4 miles away.

At this point, I feel I must interrupt the marathon tale (in more ways than one!) with a little tale of my lovely husband. Saturday 5th April was the evening of the Ranelagh Harriers Baker Cup Supper. Those avid readers amongst you will remember that I had won the Baker Cup handicap race the previous week and this evening was the presentation of this trophy amongst others which had been won during the year at Ranelagh Harriers. Anyway, David had arranged for a little trophy to find it’s way into his bag secretly - obviously not *the* Baker Cup but a very special trophy - so we had our very own Baker Cup Supper. Thanks, D, you really are the best. After dinner we thought we would go for a drink but the local pub didn’t seem quite what we were hoping for, so early night with a hot chocolate it was.

So, finally, to the point of this whole blog entry. The marathon. First thing to note is that in Bungay this marathon is The Marathon. When people find out you run, they inevitably ask if you are running “The Marathon” - by which they generally mean the London Marathon. Not in Bungay. In Bungay they mean *their* marathon, which I really liked. In fact Mr Ye Olde Post Office even asked Kirsty if she had ever run the “other” marathon in London. Hahahaha! A hearty breakfast was eaten on the morning, Kirsty did very well with a giant bowl of porridge, petit filous (don’t ask!) and banana. Then off we set. 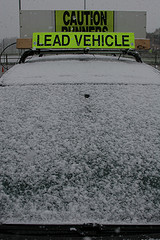 We arrived at Race HQ in plenty of time, especially important because in my capacity as Sports Agent, one of my designated tasks was to ensure that Kirsty’s personalised purple drinks bottles were in the right crates to go to the right water stops for the race. At this point I was shocked to see that the rest of the runners didn’t appear to have an agent to do this for them, they were doing it themselves! Shocking! It was not long after this that it decided to start hailing/snowing. It seemed initially to be quite good fun. After a few minutes we were growing a little concerned - Kirsty was getting a bit cold too - so we headed indoors. There was much debate about what to wear, usual race attire for cold conditions being settled upon - usual vest and shorts but with a top and gloves too. Then of course, El Garmino (the Garmin 205, to the uninitiated amongst you) had to find a whole new group of satellites.

The time before the start flew by and before we knew it, it was time for Kirsty to line up with the other 200 or so mentalists who were running the marathon. The half marathon would start 2 hours later, so Kirsty had a bit of a head start on the half marathoners. Hopefully some incentive not to be caught by too many of them. 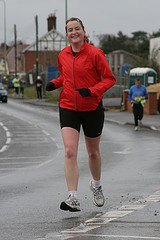 The race was started by the Mayor of Bungay, off they set. We didn’t actually see Kirsty start - despite hunting for her - and then realised that we were looking for her yellow vest but had forgotten she had a red jacket on. Oops. We headed off to the car, to whiz off to our first vantage point. As we were going towards the main road, we realised the runners were going to go straight past us, so before 2 miles we got to do some cheering on for Kirsty, just as she headed up the first hill. As we drove off again, we ended up seeing Mike and Liz (Kirsty’s Mum and Dad) by the side of the road, so hopped out to join them for a bit more cheering about half a mile on.

Next, we zoomed off to about 6 miles, which is just after the second major uphill of the course. Kirsty was looking strong and at this point was looking very relaxed, despite the howling gales and sleet! At this point, we were planning on heading off to Bungay town centre, which is just after the halfway point. We also wanted to try to get close to the leaders, so we went an alternative route and managed to sit behind the lead man for a little while. He seemed to be working pretty hard - but then anyone would at this point, as it was practically a blizzard! 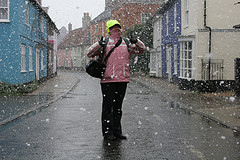 We arrived in Bungay, parked up and found an optimum viewing point on Bridge Street - which was a cobbled street. It was snowing pretty heavily at this point, as the photos show.

We managed to cheer on a lot of the marathon field before all of a sudden, zooming along, came the leaders of the half marathon. We were expecting Kirsty very soon and then there she was. In the middle of a whole bunch of fresh-legged half marathon runners, which seemed to be spurring her on up the hill. She found her way to the edge of the pack, so we could take some photos of her.

At this point there was still much smiling and as she whizzed up Bridge Street, complete with snow and coloured houses, we shouted to her, “Don’t let those halfies beat you!”. Being chased by two black dogs and a hoodie was probably helping her speed!

We went for a quick latte to warm up before getting back in the car and driving back to the 6 mile point, which now was miraculously the 19 mile point, this being a 2 lap course. This was the first time we saw Kirsty looking tired - although we expected this as it’s the first half of each lap which is hilly. No smile for us this time, Kirsty was looking way too focussed, though I did get told off by a marshal for being in the road. Sorry marshal.

We knew we couldn’t get to cheer Kirsty on anywhere else and still get to the finish in time, so we decided we would go back to Race HQ and await her arrival. It was really snowing hard again now and once the clock reached 3:30, it began to get really freezing cold. This was not boding well. The finish area was quite exciting, there were numerous fallers (the finish was on very slippery wet snowy mud), including the 3rd placed man in the half marathon who fell twice in the final straight. Cue the Race Director looking slightly panicked! Eventually some sawdust was found - which reduced the number of fallers but didn’t prevent them entirely. 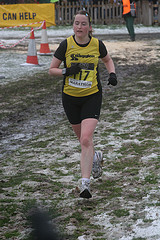 By now, it was about 3:45 into the marathon and we started to see people finishing who we knew were ahead of Kirsty at our various cheering on spots throughout the race. It was going to be tight for a 3:59 finish for Kirsty. We had no idea when she might appear round the corner. Just before 4:06, we saw her come around the corner and into the finishing straight. David, Liz, Mike and I went mad, cheering and shouting - so much so that one of the marshals put his fingers in his ears! Kirsty crossed the line and the sense of relief from her back view was incredible. We then rushed around the edge to try to find her. Soon enough, a little yellow and black icicle appeared, saying something about her hands being cold. Oh and something about, “Never again”, despite a lovely new PB, bettering her last marathon time by just under 20 minutes.

The worst thing was that we couldn’t hug her, as we were all soaking and covered in snow, so didn’t want to make her colder still. A group decision was made that the first thing we should do was get Kirsty into warm, dry clothes. To that end I marched her off to the changing rooms and she emerged dry - if not warm - ready for some penguin huddling protection from her parents.

So. What are my over-riding thoughts of the day? To be honest, it was a bit of a stunning experience. Once again, watching a marathon has made me realise that I am not sure I ever really will be able to do one. The training and commitment needed to succeed at this distance is awe-inspiring. Kirsty was amazing. She battled on in the cold and snow, there can’t be many people who have run a marathon in conditions such as those experienced on April 6th! We are so so proud of her. She ran her little heart out and her little legs off and got the PB she so deserved. With better weather I am certain that a sub-4 will be hers.