So, another Saturday, another run :) We had volunteered at Bushy Parkrun in the morning, time for a quick latte and then a zoom off to the Ranelagh Clubhouse to catch the ‘Peace Bus’ to the mob match between Ranelagh and Orion Harriers. Unfortunately David wasn’t running (dodgy ankle) and at the very last minute had to be left behind when the bus became fuller than expected. This did not help my nerves. I was already worried about 7.5 miles of cross country but there was no choice. Kirsty and I enjoyed our packed lunch (and David’s as he left his with us!) on the way and soon enough we were in Epping Forest! 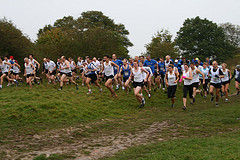 The mob match between Ranelagh and Orion has been running (pardon the pun) since 1913, which after a gap for the war, started again in 1920. The prize is the Harold Lee Trophy. Harold was a member of both clubs at different times in his life and donated the trophy in 1985.

We had a whole debate about what to wear during the run. I was a good girl and listened to my physio’s advice and wore long running tights as it was a tad chilly. Prior to the start, one of my fellow Ranelagh runners Chris R told me that he might have given me a false impression of what the course would be like. The course had been likened to a lap of Richmond Park by several people but he kindly (5 minutes before the start!) told me it was much worse and I had been mislead. Thanks Chris! Ah well, not much I could do then and before we knew it we were on the start line, performing the rousing club cry and running down the hill.

I had three things in my head as we set off. I knew I was likely to finish last (I did), I didn’t want to fall over in a giant muddy puddle (I didn’t) and I didn’t want to get lost (I didn’t). I was very lucky and had my own “sweeper runner”, in the form of the Orion Harriers webmaster called Roddy. It was lovely to have company I have to admit. It was a tough course, I managed the hills for the first half but fell apart badly at about 4 miles. Roddy kept me going by telling me all about the local area, warning me when there was a nasty up or down hill and generally cheering me along. I thanked every marshal as I went past, it was such a gruesome day, rain rain and more rain! My other issue was not wearing contact lenses, so I couldn’t see a thing when we got into the open and were no longer protected from the rain by the trees. 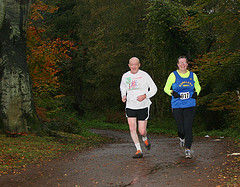 I was so glad to see the finish line. The day was so appalling that the only people there were the timer and helpers, the runners were all sensibly sheltering. I didn’t think that I would finish to be honest, it was hard.

The course can be summed up in, “Mud, rain, hills (the up kind and the down kind!), big tree roots and branches to jump over, kissing gates, and stiles”.

I look forward to doing this course again in a couple of years and hopefully improving my time. I have never been last before in a race. I have been second last, I have been last Ranelagh on many occasions but never dead last. And you know what, I didn’t care (actually, I did care but only about the poor marshals who were out in the rain waiting for my slow legs to carry me there and I also caredabout poor Roddy who had to put up with me for 93 minutes!). Next year the mob match is on “home turf” at Richmond Park. Luckily, my trail shoes have dried out in time for the next cross country race which is this Saturday…wish me luck! My only consolation is that it can’t be as hard as that Epping Forest course :) As an aside, as it felt quite unimportant on the day, we had our arses kicked by Orion!!

Full results can be found at the Ranelagh Harriers website, and a series of photos (where the two on this page are from) taken by John Hanlon can be found at Flickr.com.