About four months ago Duncan, a friend and fellow parkrunner (and Old Deer Park parkrun race director) told me he was planning on running a marathon before the end of the year to put some demons to bed after a not-so-ideal run in London in April. He wondered if I fancied training for a marathon as well. Hmn, why not. I’ve run three marathons before - with the last two at the end of a 112 mile bike ride! This time I can train for a standalone run and go for a London Marathon ‘Good For Age’ (GFA) time for 2012.

We realised that the Luton Marathon in early December would be ideal - this gives a good training focus for the latter part of the year and doesn’t interfere with the all important mulled-wine season!

Over the past few months my training has gone pretty much exactly as I wanted it to. I’ve not been following a strict schedule - just making sure that I build up my long weekly runs by no more than a mile each week - get to 20 miles and then run about four of them - a couple of weeks taper then race race race. Actually, I did follow a schedule for the final three weeks - this was the schedule that I missed out on when I got injured training for my first marathon in 2008 about three weeks before race day.

Luton is meant to be a bit of a bumpy course so I made sure that my long runs didn’t always involve the flat River Thames towpath or Bushy Park. Richmond Park would be my friend. A couple of my long runs in the park also involved plenty of off-road running and also incorporated two of the annual Ranelagh Harriers cross country ‘mob match’ races. An eight mile cross country race can be quite hard work after an 11 mile warm-up!

So, as I moved into taper time the weather made a turn for the worse. My final long run, 12 miles in Richmond Park felt lovely at 7:08 minute miling pace - to go under 3 hours 10 minutes, which is the London Marathon GFA time for my age group I needed to be running at 7:15 pace. The hard work was done - now it was time to get ready for the race in seven days time.

On the Wednesday prior to the race snow fell, and fell some more. This wasn’t looking good. On Thursday I couldn’t cycle into work in London as the local roads were so bad. Alarm bells were ringing. As the day and evening went on I was convinced that the race couldn’t be run - even if the forecasted thaw for the weekend happened. It would be an ice rink out there - surely. I was resigned to the fact that the race was very unlikely to be run, and was just awaiting an announcement on the Luton Marathon website.

Friday morning came and with it the official race cancellation notice. By this point I had mentally lost the motivation for running a hard 26.2 miles in two days time. It’s amazing how quickly I went from raring to go with full fitness to feeling like even if it was suddenly going to take pace then my mind just wasn’t in it any more. Am I annoyed? No. Well, it was frustrating but that’s the risk you take with a winter race like this. Things like the weather can get in the way. You just need to deal with it and move on. As someone said to me, you’ve done all the training, but don’t have to worry about the recovery from the race!

Now what… my next marathon is planned for April 2011 in Brighton and my strategy has now had to change. Brighton I plan to aim for a 3:10 marathon to get my London Marathon Good For Age time. I had hoped that I’d get the GFA at Luton and then be able to push hard for a sub 3 hour run at Brighton that I don’t want to take that risk right now. I’ll just ‘tick over’ for the next few weeks and the start my build up to Brighton in the new year.

Finally, it was suggested by Roger W. that Sunday’s replacement long run should be called ‘Not The Luton Marathon’ (in the style of Not The London Marathon) and thus it was… myself, Duncan, Danny and Tom ran a few laps of the Bushy parkrun course. 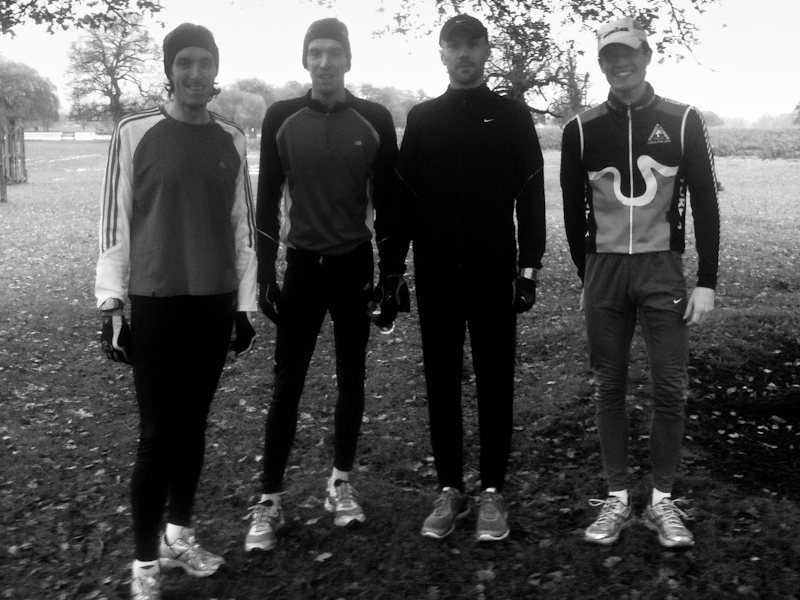 Not The Luton Marathon

I tell you, after running 13 miles I really didn’t fancy the thought of another 13 more!