This is the second of a number of posts describing my day at the 2015 Ironman World Championship in Kailua-Kona, Hawaii. The first part ispre-race. 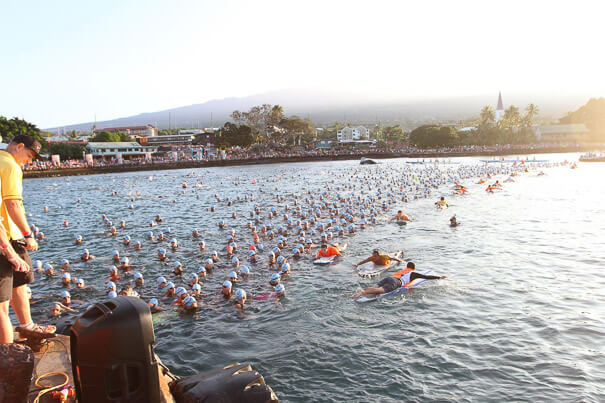 Moments before the start

Especially for me as I’ve only really swum that distance once this year. A week ago.

Anyway, the idea was to take it steady. No smashing out a fast swim (which is impossible for me anyway) and to just find some feet to stick close to and draft away for an hour and a quarter. 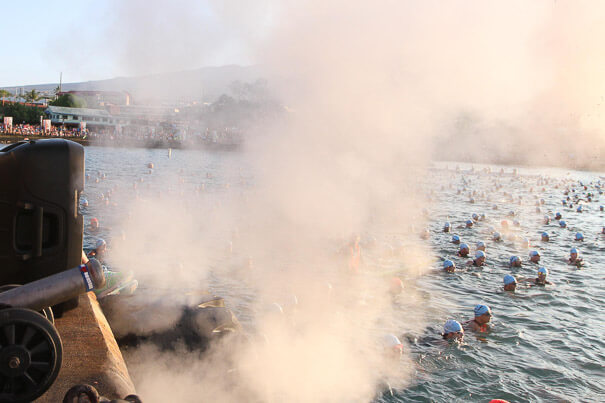 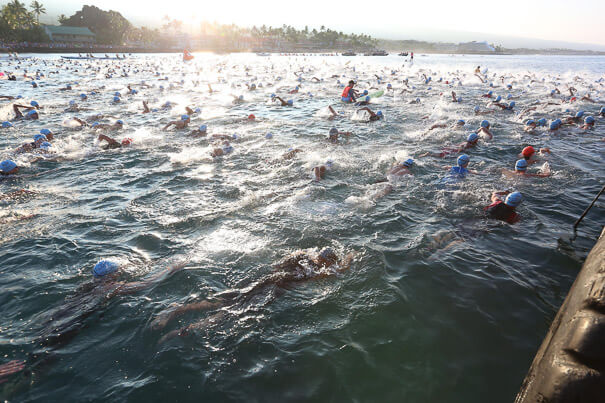 Drafting is allowed in the swim and can make a big difference. It can also help with sighting. Just follow the feet in front of you. And hope whoever they’re following etc. knows where they’re going!

I found some pretty good feet. Not too splashy so I could still see around. It wasn’t too busy and I just got on with it. It was fine. 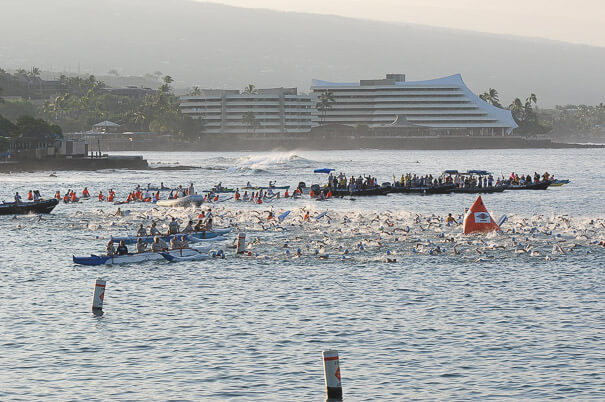 Immediately after the start. I was at the far end of the start line (away from the pier) so in this photo somewhere in the middle.

As we approached the first turnaround mark (a large boat is moored at this, the official permanently moored Ironman swim marker buoy) it started to get a lot busier as we all funnelled into a small stream of swimmers. 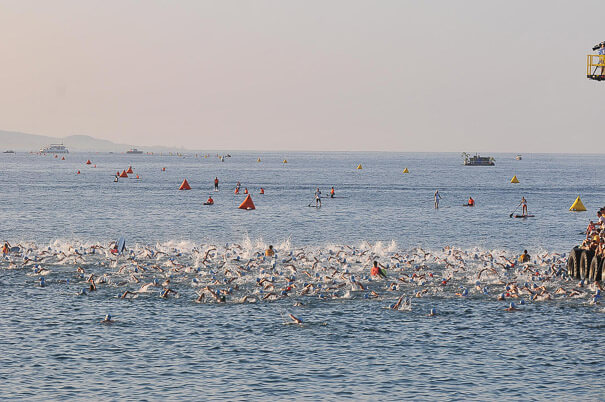 At the second turn boat I glanced at my watch and it said33 minutes. This was about the same as a week ago. I felt alright. I was happy (as can be all things considering I was 1.2 miles away from the beach with a mouth full of salty water).

On the way back to shore (only 1.2 miles away!) I was still feeling good. I’m half-way through the swim, I can do this no problem.

A couple of people who I noticed wearing rather garish looking XTERRA multi coloured swim skins during the first half were still close by. I believe they were massively discounted at the race Expo - that’s the only way you’d see me wearing one! Actually,I’d probably only wear one if it was free. And a night time swim race!

I found feet, I lost feet. I just swum. I wasn’t engulfed by stronger swimmers in the final part of the swim. This was lovely as my lack of swim endurance normally causes this to happen (I’ve written about this before). Perhaps these daily swims to the coffee boat this past week really did help after all.

As I headed back to the pier and towards the finish every now and then when you breathe and an ear lifts out of the water I could hear music and commentary. It was getting closer. Awesome. The swim was almost done. 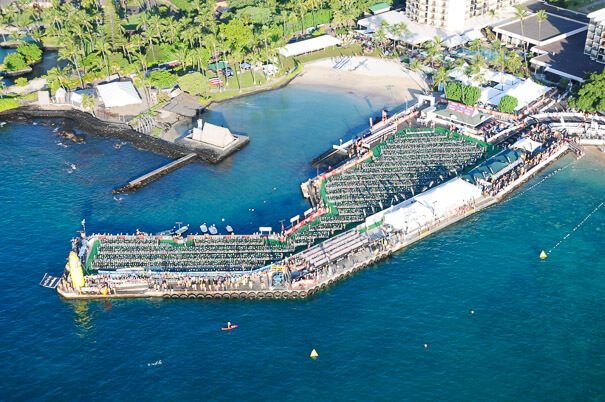 I got to shore, walked briskly up the stairs, headed through the freshwater hoses that hang from above, rinsed my face and jogged to get my swim-to-bike bag. 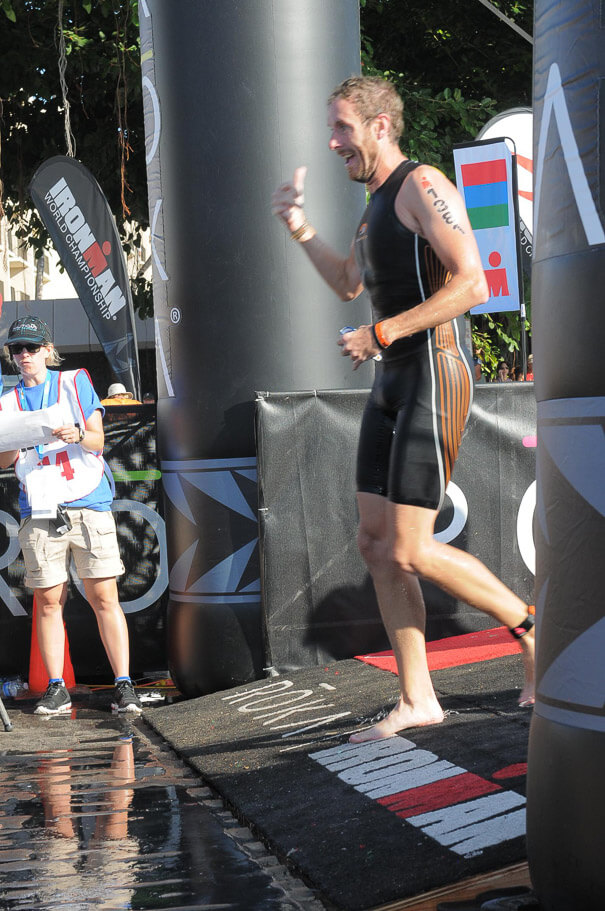 Flippin’ eck. Over one thousand two hundred people swam quicker. This is the world championship and I swim on average 40 minutes per week - so fair enough. 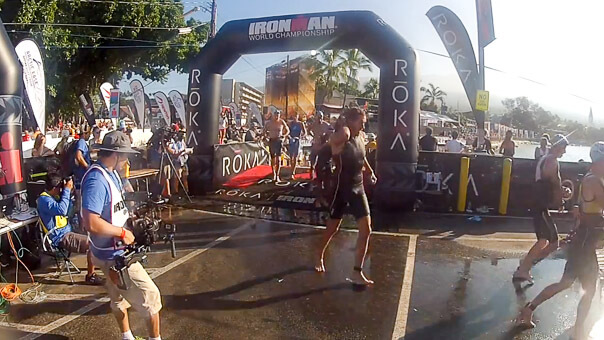 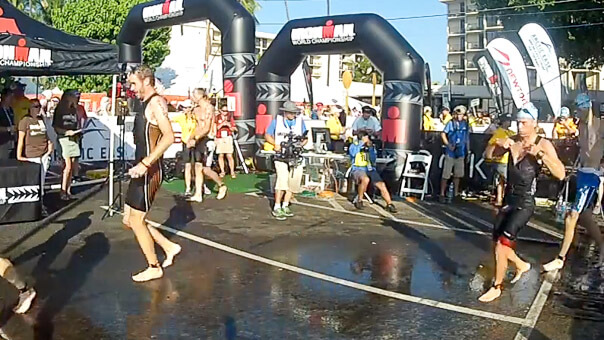 I then entered the changing tent.

Absolute fu*king mayhem in there. It was rammed. People everywhere. It was much quieter when I swam 10 minutes quicker last time. Never mind. It is how it is. Just get on with it.

Swim skin off and into the transition bag. Bike shoes out of the bag and then jog to my bike (having an energy gel on the way round). I might as well do something during the minute or so it takes to get to your bike - having a gel now is a much better idea than trying to have one at the start of the bike when it’s crowded.

I don’t do bike mounts with my shoes attached to the bike. I’m happy to run to my bike, quickly put my shoes on (all of about five seconds) and then run with the bike and get on it that way. If I raced shorter distance triathlons where every second counts (much more than it does here) then perhaps I’d do it that way but for now I’m happy with how I do things.

I collected my bike from its racking spot and as I was running with it to the bike mount point I noticed a lady with her bike in front of me - someone on the PA system then said that she was 3rd. OK, so I swam 1 hour 14 and only three women (who started 15 minutes after the men) had caught up. To be honest I had expected to have been overtaken by a larger number of women during the swim but I guess that didn’t quite materialise. 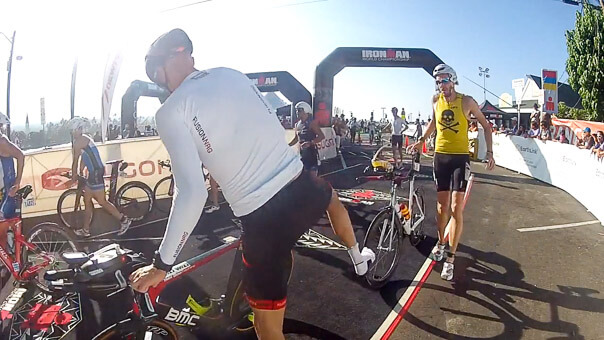 Transition 1 (from swim exit to bike start) took me3 minutes 54 seconds. In 2013 I was 50 seconds quicker. I put some of this down to a slower undo of my swim-skin coming out of the water and the carnage in the changing tent. Not that it matters.

So… time to go for a little bike ride.