After a recent holiday where I got plenty of training in (more info on that to follow in another post) - August bank holiday Monday was race 4 in the Thames Turbo Triathlon Club race series. I took part in race 3 of the series back in May (which was also my first triathlon) and was really looking forward to this event - where I wanted to make some good improvements. 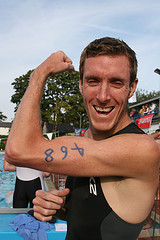 As I awoke at 5:45am the weather was looking ideal for the race - little wind and cloud in the sky - a complete opposite to the race in May. Sharon (armed with camera) and I headed to Hampton Pool with the road bike I’d borrowed from a friend (thanks Stuart), and I got it racked up in the transition point.

Through a stroke of (bad?) luck although the first swimmer started at 7am, my start time was at around 9am - by which many competitors had already finished the event. This doesn’t affect your times in any way but it does mean there’s a lot of waiting around. In the end this wasn’t really an issue as we had friends also competing (who were fortunate enough to have earlier start times) so it was good to cheer them on. 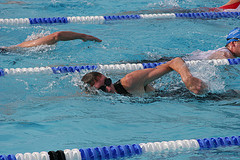 My swim was a lot more crowded than the last time - I guess it must be due to peoples estimates of their swim time (this is how the starting time/order is calculated) and I was able to get past about five or six people. I was able to draft behind one chap for a few lengths which was pretty interesting to try out. In the race in May I swam pretty much entirely on my own without interruption.

The transition to the bike was quick with the only slowdown being getting my socks on. The elastic “lock laces” on my shoes that I’m now using were perfect and I was on the bike in no time. Swim time for 426m (including transition to bike) was 9:31 (107th out of 378).

The bike was fun but hard work. I got into the tri-bars (my first time) for probably about 70 percent of the route. Although they’re great for aerodynamics, you cannot (on most models) have your hands on the brakes at the same time so you do need to be careful. I was on the normal handlebars for parts of the course on the way back where the road surface was less forgiving (and full of speed-humps).

Following the bike you get a seven minute break to get back from the bike finish to the bike-run transition point. This was a great opportunity to get the legs stretched whilst cycling and to up the cadence in my legs to get ready for the run. The transition was lightning fast - rack the bike, remove cycle helmet, run! Bike time for 21k was 38:12 (75th out of 378).

The run is clearly my best discipline and this was proven with my finishing position in the run of 10th out of 378. My time for the 5k was just over 20 minutes, which isn’t bad considering what I’d had to do beforehand! I got past a few people on the run and nobody overtook me which is always a good feeling. I did find it pretty tough, maybe because of all the training I’ve done recently or the hard effort on the bike (or probably both) - oh, or the 10 miles “easy” running I did the day before the race! 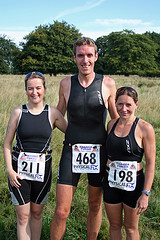 Comparing my times at the event in May (swim 12:35, bike 46:46, run 21:06) my swim was much quicker. Comparing the date/time of photos taken at the swim in both races 3 and 4, my actual time in the pool was one minute quicker yesterday than it was in May (7:48 compared with 8:48). I’m very impressed with this. Additionally my transition to bike was much quicker - no faffing around with shoe laces and getting the windproof jacket on. The bike time improvement was mainly due to using a proper road bike (and training on one recently). As for the run, this will be a combination of me being faster and the better running conditions.

Finally, before I left the event I grabbed a bargain of a wetsuit to prepare me for my next triathlon which will involve an open water (i.e., lake) swim. Stay tuned…