After a busy day out (yet another early start - 6am wake up, followed by a race and then a late lunch with friends) Sharon and I returned home, got changed into our running gear and headed to Richmond Park to run a slow, easy lap of the park. The time was getting towards 7pm (so starting to get dark) and Sharon and I headed in opposite directions (so we’d cross paths halfway round and then meet-up at the ‘finish’).

Well, half way round it had really started to get rather dark and I ran past Sharon. I wasn’t too keen on her running on her own at this point so I ran on for a few more minutes (to get to a good turnaround point) and then headed back to catch up with her. 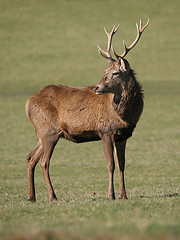 OK, the park has many deer who live there and in the evenings they seem to come out of nowhere and just stand around by the path that runs round the park. This evening was no exception and there was a section I was running past on the way back to Sharon that had quite a few (10-15) fully grown (by the looks of it) deer - with antlers and everything! I heard a few clashes of antlers (its starting to get into rutting season) only a few metres from the path and plenty of roars. Lets just say they scared the hell out of me.

The upshot of this is that because of the darkness and the frisky deer (I’m not worth attacking as I’m just skin and bone) my long slow run suddenly turned into an almost race pace sprint back to Sharon. When I eventually caught up with her she said she’d been a little concerned by the noises going on and from then on I was more than happy for us both to run back to the start close together.