Saturday 1 September was the start of the 127th (yes, 127th) season of Ranelagh Harriers Running Club. Sharon and I have been members of the club for just under a year but really like the place, the people and the training that we do with them and it was a pleasure to go along today and be a part of the club photograph and the Thomas Cup handicap race that also took place.

The Thomas Cup handicap is the first cross country race of the season, and the history of it is as follows:

“The Thomas Cup was first run in 1891, having been presented to the Club by Sid Thomas in 1890, which he had won in a 10 mile race against E.W.Parry of Salford Harriers, the previous year.” 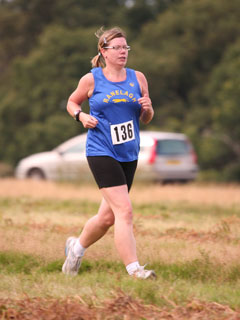 After running the Bushy Park Time Trial in the morning and also going swimming both Sharon and I were shall we say a little tired for this. We both planned to have a steady run (me so especially as I’m doing a triathlon in the morning…as you do!) although Sharon once again dug deep and pulled off a great performance.

This was a handicap race with everyone starting at different times based on recent performances in club races. The idea is that everyone ‘should’ finish at the same time - and if you run better than expected, you win! Sharon was first lady home and finished the race in 5th position (out of 58 ‘non-guest’ runners). David finished 36th. However, in speed order, Sharon was 55th out of 72 and David was 17th.

For those interested in the course, it is a 3.88 mile route in the middle of Richmond Park. It’s a fairly tough course - but that’s cross country for you - and one of the inclines (through the middle of “spankers hill wood” was a killer. A map can be found at the Ranelagh site but below you should be able to see a Google map of it via my Garmin GPS..

Photo of Sharon by Paul Sinton-Hewitt.