By Sharon on 21 October 2007 ranelagh harriers sharon the stragglers

So, here I am. Another Sunday, another race. I have to confess I had been nervous about this race, waaaaay too much self-enforced pressure and the pressure of wanting a PB only added to the nerves. I felt pretty well prepared but only time would tell. I wasn’t helped in my battle against the nerves by one of our Ranelagh statisticians Ken telling me that his estimated time for me was 91:33. Yeah right! I was thinking more like 100 minutes (and in fact Danny had set me the target of 105 minutes after the Thames Towpath Ten race back in April).

Anyway, we had sussed out our starting strategy - David lost lots of time last year at the start. I kept tucked away on the left hand side and was passed by about 1000 people I reckon! The first 3 miles flew by in less than 26 minutes - which was not in my plan at all. I tried to think, “never mind, it’s time in the bank”, I was trying not to think that I would pay for it later.

At about 4 miles in, I tried out my sport beans that Heather had kindly given me the week before. I had half of them and they were quite palatable compared to gels…I had the beans on a part of the course that I am familiar with from the Stragglers Monthly Handicap. I was quite glad to see mile 5 - hurrah, the halfway marker. I reached halfway in just over 45 minutes, which meant that if I kept going at a reasonable pace, I would get a pretty big PB. However, there was still a long way to go.

Lots of cheers from marshalls we knew - especially welcome from Chris, Paula, Guy and Peej at my personal worst part of the race, mile 8 to 9. I hate it. I knew my pace had slowed a lot and a quick look at my Garmin told me I was only just under 10 minutes for that mile I reached halfway through that dreaded mile and saw Danny who shouted, “1:32” at me - and something else which I shan’t blog about but which made me laugh… 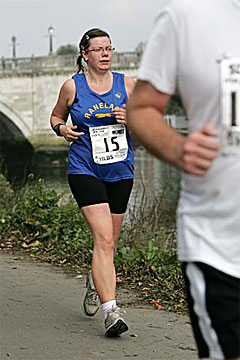 Somehow, once in the final mile, I managed to pick up my pace again and was spurred on further by cheers from Liz and Keith (Chairman of Stragglers) up Lebanon Park and onto York Road. It was at this point that someone decided to overtake me. Oh no no no. She was wearing and i-plod too…grrrr. As we rounded the corner to the finishing straight, I dug deep and put in a sprint to make sure that I was over the line before her.

I crossed the line in 92:27 (56 seconds outside Ken’s estimate but closer to his than mine!) but more importantly in a huge PB, by 19 minutes and 41 seconds. I was chuffed to bits. David greeted me with a great big hug and I was a bit bewildered at this point I have to admit. Crossing that line was the most emotional I have been since finishing a race I think. I always imagined that crossing a line in my first 10k would make me cry (it didn’t) or getting my first sub-30 5k would make me cry (it didn’t). I didn’t cry after this race but I did grin and bounce around a lot. I wonder if I will cry after my first half marathon…

Anyway, I shall stop now. I just wanted to say thanks to all the marshalls and my fellow runners for the fabulous encouragement I received around the course. It was a great race, I really enjoyed it and will definitely have it in my calendar for next year.