Today was the first official running of the Richmond Park Time Trial. On the way to the car park the views from Richmond Hill towards Petersham, Ham, Twickenham and beyond were truly spectacular. There was a thick mist over the Thames and a clear blue sky. Where was my camera when I needed it! 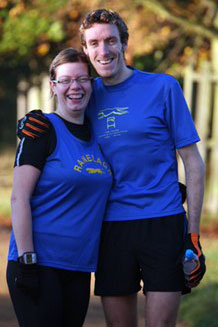 After parking up Sharon and I warmed up by running to the gate at the entrance to the park. There’s a toilet stop there (great, just like Bushy Park) and then we jogged around slowly towards the starting area where we saw a few familiar faces.

I had run the course before a few weeks ago (and run round the park fairly regularly) so knew what to expect. There were just over 40 of us at the start line (very civilised) and I made it onto the front row for the start. In fact, for the first minute I was running at the front of the group along with fellow Ranelagh Harriers member Jonathon Stacey (only because he didn’t know the course!). At this point he pulled ahead and I was sat in second place.

Well, this is where I remained all the way to the finish. I crossed the line (in second place) in a time of 18:42. We know the course is slower than the Bushy Park 5k course but it will be interesting to make time comparisons when more and more people go from one course to the other. For anyone interested my average heart rate was 173bpm and the maximum was 185.

I’m sure my times can come down from there (especially when my left calf is not hurting) and a true test will be when I’m not running alone but in a busy pack of racers - this is the only difficulty with running these small races - less people to ‘work’ off of.

Sharon was having an easy run today and breezed round in 28:27.

Overall I love the course as it provides more than just running on the flat and look forward to running it again in the near future (that means probably next week!).