By David and Sharon on 18 November 2007 david sharon

It’s always sunny at the seaside….isn’t it? Well, on Saturday night the Met Office inshore waters shipping forecast for Sunday was as follows…

This could only mean one thing - we’re going racing! Sharon, myself and friends Kirsty and Danny all headed down in my car to Brighton to run the Brooks Brighton 10k race. The race is run over a fast flat course, although with the ‘breeze’ (ie., a force 6-7 wind) the word fast is hard to grasp. 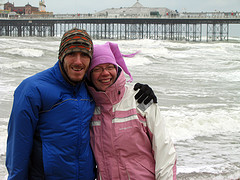 We arrived in Brighton nice and early, a good 90 minutes before the start so had plenty of the time to enjoy the seaside (it wasn’t raining but it was bloody windy and cold) and go for a walk along the pier. After a couple of toilet stops (this is all part of the ‘race day’ ritual) we headed back to the car, removed our numerous layers of clothes and headed off for a warm up and then the start.

After recent calf trouble I had never planned to race this hard, and I kept to my plan. I ran a 19:11 5k time on Saturday which I was very pleased with and it felt relaxed. My plan for today was to go for just under 40 minutes (interestingly a barrier I was determined to break at the start of the year) but not to kill (or injure) myself in the process.

Firstly a quick aside… Just before the start as we were all bunched together and waiting for the gun to go I felt a couple of drops of the forecast rain on my legs. Alas it was not rain… I turned around and saw a chap standing directly behind me just standing there and having a wee! Yes, just stood there right in the middle of the pack - he didn’t even move to the side or anything. Unbelievable. The start gun went about 15 seconds after he’d finished. Talk about a ‘close call’. Anyway…

The first 6.5k’s are fairly well shielded from the wind and I ran very comfortably for those. There were nearly 2,500 runners (one of, or maybe the busiest race that I’ve run in) and I was certain not to go off too fast. This is part of my longer term training and not a race. As we headed toward the final turn point the wind had been behind me for about 5km and I knew that I’d be running into the wind on the way back to the finish. For info my 5k split (wind assisted) was 19:25. Well, as Danny went past in the other direction (he was a few minutes ahead of me) he shouted something along the lines of ‘it’s bloody windy’. He wasn’t wrong.

Because I’d run comfortably until this point I had plenty left ‘in the tank’ and was able to push quite hard to maintain my pace. For many of the people around me that was not the case and I spent the remainder of the race overtaking quite a few people (quite a different story to the second half of the Cabbage Patch 10 race a few weeks ago).

I continued to push and made it to the finish in 39:32 (193rd position), a time I’m extremely happy with considering the conditions and the fact that I wasn’t racing hard today. Based on my 5k split I ran 42 seconds slower on the second half, where 3.5k was directly into the wind. I’ve a half marathon to run in a few weeks time and I would have been better concentrating on a longer slower run today but never mind, I had a lovely run instead. Now, over to Sharon…

Well things have not been good on the running front for me since the Cabbage Patch back in mid-October. I have an ongoing “thing” with my left quad/hamstring/hip but it was kind of OK this morning. I haven’t done many miles in the last few weeks but anyway, I was off for a race anyway.

I found my way to the “55 minute” starting area - although I was thinking it was a bit of a bridge too far to get 55 minutes today and I was doubting I would even get near my PB. I set off and immediately started to overtake people, which was a good boost. However, I can only think that they were starting in the wrong area…please, if you are racing and know you are going to finish in a certain time, then go to that start area! If you don’t, then at least keep to the sides and not wobbling and weaving all over the place in the middle making it so hard for people to overtake!

Anyway, we headed off up to the 1.5km mark called Black Rock, which is a turning point, and pretty soon we were seeing the front runners. I really loved this aspect - seeing people we know from our running clubs and giving them a shout and them shouting back is fab! Really spurs you on to know there are so many people rooting for you.

I was really pleased to get to the 5km mark in 26:48, but of course I knew there was wind to come! I could see from the lead runners that their vests and shorts were blowing and they were battling that force 6 wind, which hit me at the 6.5km turn around cone!! I dug deep and battled my way along but it was soo windy it felt like sometimes I could barely catch my breath. I ran behind shelters a couple of times to get a couple of really good breaths to keep me going! However, before I knew it, I was at the 9k mark and realised that unless something went disastrously wrong I was going to get a PB. I was cheered in by Hollywood and Shiraz (“go on, kick”) and then PSH (who I’d also seen earlier in the race with his giant lens, no doubt awful photos of me to follow). All most welcome and meant I tried to find a bit extra to get under 55 minutes. 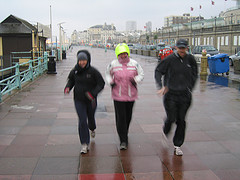 After we finished the race a group of us met up (11 in total) and headed to a restaurant for fish and chips and a hot cup of tea. A smaller group of us then headed onto the pier to have a quick play on some of the amusement games. We then ran back to the car in the freezing rain (it was pouring at this point and was turning into icy chips to pierce our faces!) and ever increasing wind. We then headed back to London clutching our shiny finishers medals from the race.