It was a cold day on Saturday, but this didn’t stop over 75 runners from Ranelagh Harriers and Thames Hare and Hounds running clubs take to the paths and woods of Wimbledon Common for the 2007 mob match.

The annual mob match versus Thames Hare and Hounds first took place in November 1974 and has been run 33 times previously. Everyone (well, almost everyone) counts in these races and the scoring is as follows:

Scoring of Teams:- If for example Ranelagh field 50 runners, and Thames 45 runners then we score 42 a side. i.e., 3 less than the smallest team fielded. The winner scores 1 point, the second 2 points and so on down to last place. The club scoring the least points is declared the winner. Everyone helps to score - Each Thames runner you pass, makes Ranelagh 2 points better off.

The course is the Thames 7.5 mile course which consists of hills, streams, horse riding trails, concrete paths, roads, golf courses, and just about everything else that Wimbledon Common can throw at you - with lots of mud and puddles thrown in for good measure. Whatever you can think of, chances are that we ran through it!

I planned to take it steady and not try and burn out too early and am happy to say that I was pretty consistent throughout. After about a mile I managed to get past two Thames runners and from there until about half a mile from the finish I managed to hang on (just) to a small group of Ranelagh runners. In the final couple of minutes I was overtaken by two Ranelagh runners, and I didn’t put up a fight to stop it happening - as it would have made no difference to the scoring. Now had there been a Thames runner trying to get through that would have been a different story altogether!

The winning time was 39.56 (Tom Kingsnorth from Thames) over the 7.12 mile course (according to my GPS) and was closely followed by Phil Killingly of Ranelagh in 40:11. I finished 33rd in 47:46 with an average of around 6:42 minute mile pace - not bad at all for the terrain. Out of the Ranelagh runners I was 15th which I was happy with. I could have probably finished a couple of places higher had I pushed harder in the final part of the race.

Now, let me mention the course - I loved it. Much of it was flat but there were quite a few fantastic ups and downs right in the middle of the woods. I’d have no way of finding my way round these narrow gaps between trees had it not been for the excellent course marking by the Thames guys - excellent work. The paths were completely covered in leaves so you had no idea what was below your feet, and the were a lot of prickly holly bushes to dodge around, which made me glad I was wearing long arms and running tights.

Earlier in the week I bought my first pair of cross country spikes (a pair of Mizuno Wave Kaze 2’s). I’d never run in spikes before and they came with ones that were about 9mm in length. Not everyone was wearing spikes in the race, with some opting for trail/fell shoes and others with regular running shoes. As for myself, I’m so glad I wore what I did - they give you an incredible amount of confidence when running up and down hills and cornering at speed - over mud, leaves and water. I loved them. 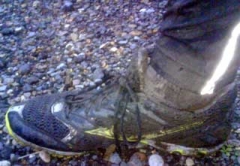 At the start of the race my shoes were lovely and clean - and by the finish they were absolutely filthy. One muddy puddle went almost up to my knee. My white socks are no longer white. Great fun.

After the race we all headed back into the Thames clubhouse for cups of tea, sandwiches and cake which were just what I needed whilst the results were being calculated.

The overall results were that 35 runners from each team scored, with Ranelagh having 1428 points and Thames 1058 thus declaring Thames the winners. After this, the 34th running of the mob match, the results stand at Ranelagh Harriers - 13 wins. Thames Hare and Hounds - 21 wins.

Following the race many of us headed to a local pub for a drink (soft drink for me) and then I headed off to watch a classical music concert from the Ealing Symphony Orchestra a few miles away. A busy but very enjoyable day.