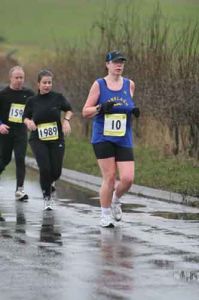 Another Sunday, another race. This time was a first for me, my first half marathon. Unfortunately my training hasn’t gone according to plan (for “according to plan” substitute that it hasn’t really been happening at all thanks to my 8 weeks of having a dodgy leg)…I didn’t know really what I was expecting at all. I had a conversation the day before about trying to do 10 minute/mile and that would have been about 2:11:00. I had dreamt when I first entered of being closer to two hours but I digress (or is that ingress or egress LOL!).

We set off in plenty of time, the usual car set-up, usual loo queue. What was not usual was the super-organised baggage drop, the brass band and the lovely warm hall to wait in. Before we knew it, we were on the start line. It was at this point a tad chilly (I was only wearing a vest, shorts and gloves) but I knew I would warm up soon. What *was* irritating was that despite the race instructions saying not to wear MP3 players and headphones, lots of people were wearing them. I’d love to say a very tongue in cheek thanks at this point to the woman who practically tripped me over when she overtook me. Her music was blaring and was so spatially unaware that she cut straight in front of me and I nearly came a cropper. Why do people 1) feel they should ignore race instructions, particularly when there are cars and we run on a dual carriageway in this race and 2) wear an MP3 player during a race? What about soaking up the atmosphere?

Rant over. Back to the race report! The first 3 miles or so are fairly level and despite my leg feeling a bit twingy I was OK. I plodded along, resisting the urge to speed up when I was being constantly overtaken! About 3 miles, there was the first hill that was marked on the course profile as looking quite sharp. It was actually fine. I kept expecting worse hills but they didn’t come. Kirsty was right in describing this course as being “truly undulating” - lots of people were complaining afterwards about the awful hills but maybe they are only used to training on a treadmill? Or only run on the flat? Compared to Richmond Park, this was fine.

About 4 miles, it started to rain. By 5 miles we were in a fairly open space for a couple of miles, blasting us from the left. At first I thought it was just rain but wondered why it was stinging my leg so much - I lifted my hand and caught a hailstone on my glove. That explained why it was stinging so much!! Before I knew it, it was the halfway point. It hadn’t been so bad to get there - but I didn’t know how the rest would be. I carried on plodding along, a few more little hillocks to run up and over and suddenly it was 9 miles. I knew from 9 miles it was mostly downhill/flat - apart from the end, which was an uphill finish. I could cope with this. Once we got to 10 miles, I thought, “right, it’s just Bushy Park to get round now”. At this point one of the marshals (who incidentally were excellent, it must have been way worse for them stood in the driving rain and hail than for us) said, “Keep going, don’t stop now” - pah, as if!

At 10 miles I employed a supposed Paula Radcliffe technique of counting to distract me. It helped a lot, as long as I remembered where I had got to…467 mississippi 468 mississippi..oh pants, where was I? 1 mississippi 2 mississippi….

Soon I saw the 12 mile marker. The furthest I had ever run prior to this was 11 miles back in April (I thought it was 12 miles but I have just checked my log and it was only 11 in 2:14:48)! Training for this race, the furthest distance I had covered was 10 miles - not in my plan at all but there you go. I kept focussed by trying to catch some of the people in front of me, who seemed to be slowing a little.

As I rounded the corner into the finish area, I heard shouts of “Go Sharon” from David, Kirsty, Jane and Carola. I crossed the finish line and walked up to them - I have to confess I felt a little dazed. In fact I *still* feel a little dazed now. It’s quite an odd feeling to have completed something you have been thinking about for so long.

Well done to everyone who we know who ran, especially David, Kirsty, Kieren, Heather, Claire and some geezer called Danny who was doing a training run and not racing. No doubt see you all on a start line soon! After all, what else is there to do on a Sunday?