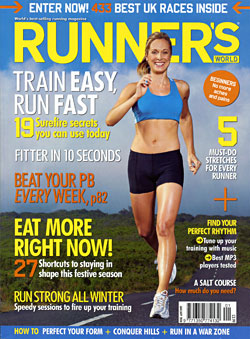 OK, there’s two things I can say about this rowerunning.co.uk blog website:

Since I ran my first 5k time trial in June 2006 I slowly became hooked, and by September of that year I became full on addicted. Sharon joined in shortly afterwards and since then we have just about made it to a time trial every week - unless we’ve been on holiday - although we managed to run our own “Time Trial” in Lanzarote this past August.

A few weeks ago Sharon and I were contacted by Paul (the man who started the Bushy Park Time Trial) telling us that Runners World magazine in the UK were writing an article about time trials and that we had a story worth telling! They asked me to call Nick (the journalist) which I duly did and arranged a time to have a longer conversation. The following day Sharon and I had a good telephone conversation with the guy where he asked us all about our involvement with UK Time Trials and how we’d improved (or not) by doing it. We then left it at that - curious about what would come of it.

Just over a week ago the January 2008 issue of Runners World dropped through the letterbox and if I may say so myself, what a fine issue it is! On page 82 there is a four page article about running time trials and Sharon and I are the featured “Case Study” - together with a photo of us both. I’m also quoted a couple of times in the article and I think it all portrays the UK Time Trial ‘movement’ in a very positive way.

“There’s no doubt that seeing yourself improve week by week is a huge boost,” says BPTT veteran David Rowe. “It’s made me into a real runner - something I’d never thought I’d be saying a year or two ago.”

So, if you’ve not seen it yet go and get yourself a copy of the January 2008 issue of Runners World magazine (UK), or read some of the article at their website - but if you read it online you’ll miss the case study!