By David on 26 December 2007 david the stragglers 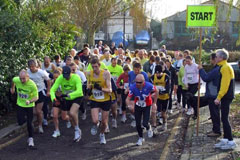 On 26th December, whilst many people are taking it easy after the Christmas excesses Sharon and I donned our running gear and headed into Twickenham for the annual Cabbage Patch (it’s a pub and serves as an excellent race headquarters) 4 race which is organised by our second claim running club - The Stragglers.

I ran this for the first time last year and I really wanted to see how I’d improved over the past 12 months. Conditions were ideal - it was cold and dry - lovely for running. I was feeling good for this and the end result proved it - I finished third! The race is just under 4 miles (my GPS said 3.95) and takes in a lovely route along the towpath beside the River Thames between Twickenham and Richmond.

Because of the day of the year and the course route I really enjoy this race - you’re running along the path beside the river and have to navigate between the large number of families walking their children/dogs/grandparents in the sunshine. I ran the entire race alone - watching the two runners ahead of me slowly drift into the distance. Just after 3k I could hear someone close behind me but there was no way I was going to look to see how close he/she was - that would only show that I was running scared (which I wasn’t…much). I dug deep and after a while the breathing sound just faded away - phew.

My finishing time was (according to my watch 23:08) which gives me an average pace of 5:51 per mile (a few seconds off of my best 5k pace) - a time that I was very happy with. Sharon ran it in 35:50 and was pleased with her performance - especially as she’s still half on the injury bench!

Outside of our race, the winner was our good friend Danny. Last year he had a ‘navigation issue’ and went the wrong way - this year he ran brilliantly and finished first - followed shortly by another friend, Paul.

Finally, last year I ran this in 24:40, so was over 90 seconds quicker this year. I think that calls for a celebratory glass or two of wine this evening…

(Thanks to Danny’s dad for the photo at the start)