As part of my marathon training my schedule had me lined up for a half marathon this weekend - and this morning, I lined up for the start of the 25th running of the Tunbridge Wells Half Marathon. In addition to myself the usual race team was there - Danny and Kirsty were running and Sharon was our team supporter :)

The weather was perfect and as for the course, lets just say that in the race pack it says “The course is one of the most testing and picturesque on the racing calendar”. Picturesque I’d say they’ve got a point….testing - well, there’s a couple of notable hills in there but overall I wouldn’t call it a killer course. I would say its certainly tougher than the Bedford Half Marathon though. In the race pack when the course is described one line says… “Up two hills, the second is called Spring Hill and tends to interrupt conversations.” 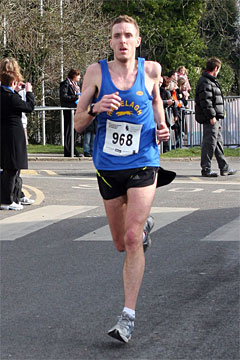 My plan wasn’t to race this - it was to run steady, sensibly and not get pulled into any individual races. I’m running this for the time, not the position. My best half marathon time is 1:27:42 and my ideal race would be around 1 hour 26. This is the equivalent of 6:33 minute mile pacing.

The race began and all was good, with the first few mile splits being 6:32, 6:32, 6:37, 6:34, and 6:34. Hmn, now why do my splits stop here… I’ll tell you… it was the hills! The first few miles were undulating, with lots of ups and downs and I was very comfortably keeping to plan. At 5 miles I was 3 seconds off of 1:26:00 pace. From between miles 5 and 8 it got hilly. There was one long hill (noted in the course pack) which was seemingly never-ending but not at all impossible. Just buckle-down and get on with it I say. The splits understandably dropped significantly here - 7:09, 7:08, 7:38. We were now about as high as the course gets, and it was undulating back to the finish. I felt good and pushed on although just couldn’t get back to my original pace, with my final 5 miles of splits being 6:58, 6:41, 6:53, 6:52 and 6:26. Although I had dropped off the pace it just couldn’t easily bring it back under control. The only good thing about this was that just about everyone else was in the same place as me. There was very little position changes in the last few miles and I’d say that throughout the race I certainly ran past many more people that those that overtook me.

So, the final result - 1 hour 29 minutes and 36 seconds. Way off of my target and my personal best time at this distance but I’m still happy with it. My pacing was fine (until the main hill, which I guess just took it out of me - although somehow I didn’t feel like it had - so much that I couldn’t recover during the final miles) but I felt good throughout. I didn’t kill myself out there today and that’s probably why my time didn’t show it. Anyway, onwards and upwards…

I would thoroughly recommend this race - the organisation is absolutely spot-on (with a bonus of the race being started by 2004 Olympic double-gold medal winner Kelly Holmes) there were marshals at just about every single turning or junction on the course and there was local support throughout the entire course. Brilliant stuff indeed. Post race there was an excellent medal, t-shirt and goodies including some heath-bar thingies, a sports drink, free fruit and free entry into the local gym to have a shower - which we took advantage of - together with a relaxing dip in the spa-bath. Following this it was off to Pizza Express for a lovely late lunch. Another very busy day where we left home at 7:30am and got home over 10 hours later. You may as well make the most of your weekend days hadn’t you…

As an aside, my marathon training (tomorrow is the start of week 11 – of 16) is only just getting back on track after injury and illness, and this past week I clocked my highest ever mileage - 48 miles. The next few weeks plan for mileage around the same level, and I’ve got some pretty long Sunday runs booked up over this time - 20 miles, 20 miles, 21 miles and then a two week taper before the big day!