Today was meant to be David’s last long run in his marathon schedule. However, due to the torn calf, he was not running. I had been talking to Kirsty in the week about running the last lap of this 3 lap course with her for moral support. Despite the fact it was chucking down with rain, David wasn’t running and I am sure Kirsty would have made it round without me, we were up at our usual early bird time and off to Cranleigh at 7:15am for the Cranleigh 21 mile road race, which is organised by the MABAC Running League.

There are two options with this course, 15 miles or 21 miles. It is a 9 mile first lap, followed by one or two 6 mile laps depending on which option you are running. Of course, the danger here is that you run the 15 and then bail out instead of doing 21 miles…hence my offering to run with Kirsty in case she felt like stopping.

We were cheering a few people on and were *very* pleased to note our good pal Danny powering up the last quarter of a mile in the lead! We shouted to him that he was first (I think he was surprised, he thought he might have been second) and sure enough he won! Fantastic run. In fact he ran 21 miles faster than I did my half marathon in December…speedy so and so! Shortly afterwards, friend and fellow Ranelagh Darren crossed the line having had a steady run. I’m sure both of them are feeling confident for excellent marathon times in 3 and a bit weeks time… 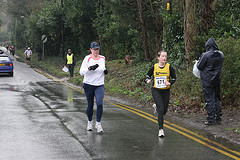 It was now getting to the point where I needed to prepare to join Kirsty. My original plan had been to run about a mile down the course to meet her and then continue on but I was warned not to as the last mile is quite hilly. So, as I saw her coming up the hill, I made my way over to a little gap and then popped out on her from behind a bush. She was looking comfortable, we had a nice chat for the first 4 miles of the lap, I carried her drink, protected her from traffic in the style of running on the outside (that’s what it always said to do for someone younger in my Brownie Guide Handbook!) and trying to be encouraging. We steadily overtook people - which wasn’t in the plan but just happened - and sure enough we soon only had a Time Trial course to run. At about 19 miles, Kirsty started to go a bit quiet (I am not entirely surprised!) but I carried on twittering and trying to keep us at the right pace. Once we got towards the final mile, Kirsty said this would be the longest mile ever. It was better than the same mile on the previous lap for her I think as I really was twittering by this point, about keeping form and using tramlines or something. About halfway up the hill, I spotted one of the women I run with at Ranelagh who was slowing to a walk. I called out some encouragement to her as we ran past and she managed to start running again. As we chugged up the hill, the fluorescent banners of the finish came into view - a very welcome sight for Kirsty I am sure!

A few photos from the race can be found at Sharon’s gallery.