In 2007 I took part in this Ranelagh Harriers organised run for the first time and I’d been looking forward to this years event for some time (read the 2007 report for the history of this special run). On Tuesday night (1 July) the weather was absolutely beautiful with temperatures in the high 20’s.

Last year I ran with the ‘not quite the fast group’ but this year I’d planned to go with the faster group. We started out as a group of about 15 of us (we were also graced with the presence in our group of Hugh Jones - winner of the 1982 London Marathon with a time of 2:09:24), and my aim was to stick close to Chris O. - who led the fast group last year and seems to know Richmond Park like the back of his hand.

Chris’ plan was to try and stick to paths where possible - I can now say that it was not very possible - we spent a lot of time running through bumpy ankle-twisting ground and 5 foot high fern. I found the run pretty tough going - got stung by nettles, and managed to get an all-over-leg rash from running through fern and other bushes. Other than that it was great! 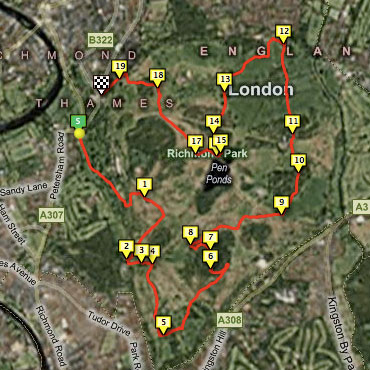 I ‘dipped my toes/shoe’ in just about all of the ponds that we saw and managed to almost slip a couple of times. Needless to say one at least one occasion my foot was rather wet from the water - it kind of reminded me of cross-country season!

I found the run pretty hard going and by the end had managed to click the lap button on my watch (at each pond that I saw) a total of 19 times. I’m not sure which pond I missed, and interestingly some of the other groups of runners managed to find 21 ponds!

As we reached Richmond Gate to finish the run there were about 10 of us grouped together. There were a couple of ‘splinter groups’ formed during the run but our group mostly stuck together.

The final time from when we entered the park at Petersham gate to when I stopped my watch at Richmond Gate was 1 hour 8 minutes 58 (in 2007 my time was over 1 hour 20) We covered a total of 8.54 miles and didn’t stop at all during the run. After returning to the Ranelagh clubhouse I waited for the other groups to return to the club, and I’m sure Sharon will write about her run in due course…

The map shows the route that we took (which was almost identical to last years map, although we didn’t get lost in the Isabella Plantation this time around!) As I said before I really enjoyed this years run and look forward to doing it again next year.