Hopefully I’ve not spoken too soon! Last week’s (28 June) BPTT was an interesting one. I’d pushed hard in the run and managed one of my slowest ever times (20:52). I think part of this was a bit of a cold that I had and the fact I’d done a 2k+ lake swim earlier that day. My poor time was commented on by Steve Badgery (who is a superb example of someone who’s been there, done that and still races hard and has the desire to improve) - it makes sense to listen to people like Steve - and I’d hoped that I would be able to do better this week!

This week I didn’t do the early morning swim (should I really be getting up at 5:45am on a Saturday!) and went straight to Bushy Park. When the race started I pushed pretty hard from the off, and about 1km in I found myself beside Steve. He looked across at me, then looked across again (a superb double-take) and said something like “that’s better.” Indeed it was, but not enough to keep up with him as he crept away to another personal best.

Although I was wearing my watch I chose to just run hard, ignore it completely and just listen to my body. I ran hard, crept past a few people (I don’t believe anyone overtook me) and when I crossed the line I’d finished in 18:25, which is 21 seconds off of my PB. This was my fastest time since October last year (I got close to 18:30 in February but not under that time).

Needless to say I was very pleased with that and was happy to have a chat with Steve afterwards!

Following the run it was the usual trip to the coffee shop and from there we went swimming where I timed myself over 400m (as I need to put an estimated 400m time down for a triathlon I’m entering in August). My time was 7:16 which was great (for me) and shows an improvement of over over a minute in the past year. 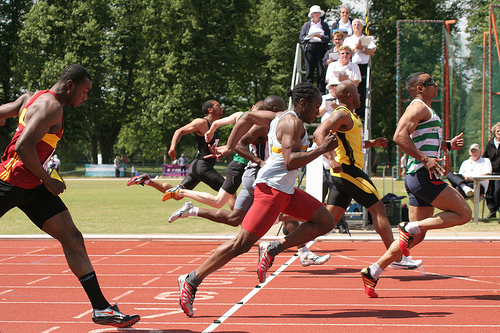 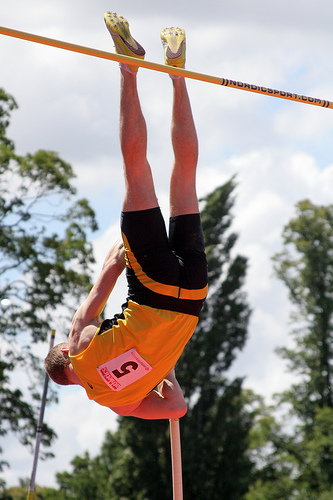 Highlights had to be watching Alex Nelson run 20.49s in the 200m which is a BAL league record and is safely inside of the “Olympic ‘A’ Standard” time. This is also the fastest 200m time in the UK so far in 2008 (not bad for a 19 year old!). Here’s hoping he can do the same at the trials this coming weekend.

In the high jump Tom Parsons of Birchfield Harriers equalled his best of 2.25m and just missed out on 2.30m, which would have been the Olympic ‘A’ Standard. His jump of 2.25m is the 5th best in the country so far this year.

A few photos that I took at the event can be found at our photo gallery.

All in all a great day of sport competing, training and supporting.