In 2008 I entered the Bala Middle Distance Triathlon as my first half-ironman distance (2k swim, 78.5k bike, 20k run) or there abouts event. This year I came back for more…

The day before the race we headed to the lake for a quick dip in the lake. The wind had whipped up some waves in the lake and I didn’t enjoy the swim at all. Swimming into the windblown chop was hard work and I found it virtually impossible to get any sort of rhythm in place. In one mind I hoped that on race day it would be calm water (like in 2008), but then again if it was rough then it would be good practice in difficult condition for Ironman Zurich in a few weeks time.

Sunday morning dawned and after breakfast I cycled to the race site. The lake was once again choppy, but didn’t look quite as bad as on Saturday. 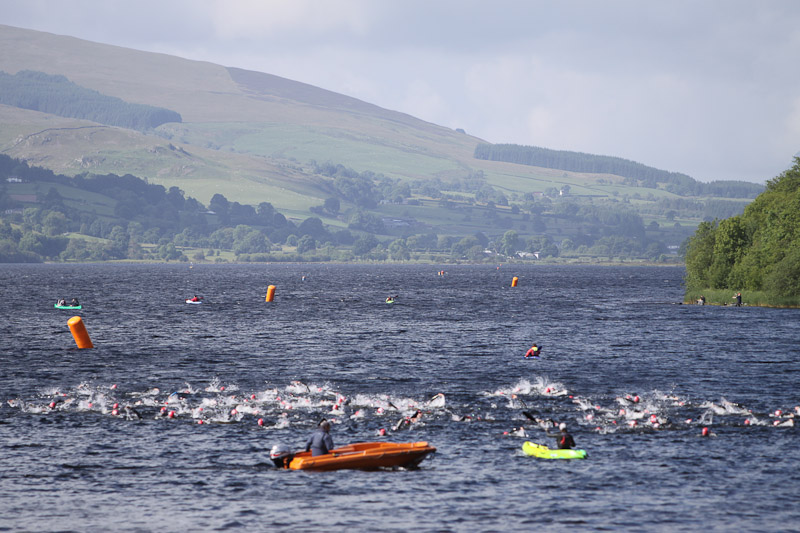 Start of the senior mens race

Just before 9:30am the first of three waves of competitors entered the water. I was in this first wave (senior men) and positioned myself in the middle of the pack. There were around 200 of us in this first wave. At around 9:30 the horn went and we were off. I got caught right in the middle of it - there were arms and legs kicking me everywhere, I was swimming over people, people were swimming over me - it was chaotic - and something I didn’t enjoy. I’m expecting this to happen in the Ironman next month and wanted a little ‘practice’ now. It wasn’t much fun. On top of this the choppy water didn’t help much and for a few minutes there was no chance to get into any kind of rhythm.

Eventually things settled down (a bit), not before I’d swallowed loads of water (I had to roll onto my back for a few seconds just to get some clear air and to try and relax). I then got back into it and headed off to the turnaround mark - which couldn’t have come any sooner! I tried to draft off of one chap but this only lasted a few seconds as I was going a fair bit quicker than him. After the turnaround mark it was a more comfortable swim back to shore with the waves pushing you in the right direction. The only difficulty was when you looked up to sight the shore there was sometimes a big wave in front of you blocking you view so you had to look again straight afterwards. 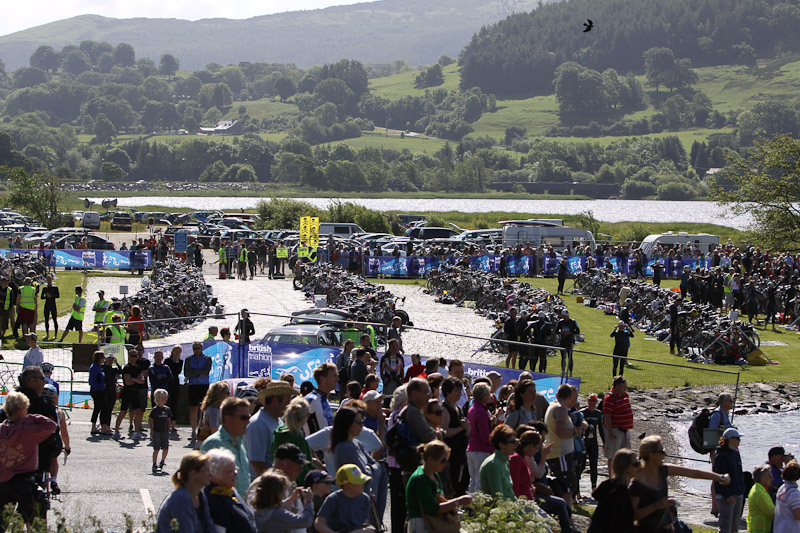 After getting out of the water I ran to my bike (and found it straight away) and got my wetsuit off pretty quickly. My chip timing ankle strap had worked loose as a result of me taking off my wetsuit so I had to undo and put it back on again - only a few seconds lost here I guess. After getting sock, shoes and my cycle helmet on I wheeled the bike to the mount point and got going. The pirate support at the T1 exit was brilliant - they were so noisy. I was rather excited to see them (and to be out of the water) so gave a big cheer back. 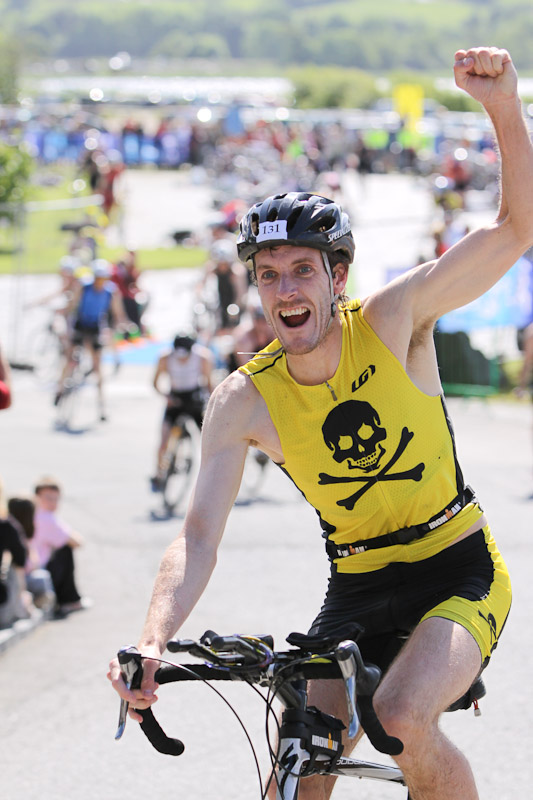 Appreciating the pirate support at the start of the bike leg

The bike was rather uneventful, although after about a mile my inner thighs were hurting. Perhaps the swimming had something to do with it, although I tried not to kick too much in the swim (only where there was someone kicking me!). This was a worry but ultimately didn’t seem to be an issue.

I pushed pretty hard throughout the bike. A few people with their fancy time trial bikes and disc wheels overtook me and I overtook a few people too. I pretty much held my position on the bike which I was pleased with. In the second half I found it tougher at times and just couldn’t get my speed up. Not sure why but that phase eventually disappeared. I knew the toughest hill was at about 38 miles (and that Sharon would be at the top taking photos). I gave a smile and pushed on. On a couple of (downhill) occasions I attempted to pee (without pulling over and stopping) and was mildly successful (i.e.., my shoes didn’t go all squelchy!). This is something that many people do in these longer distance events so don’t be alarmed at my lack of finesse here! 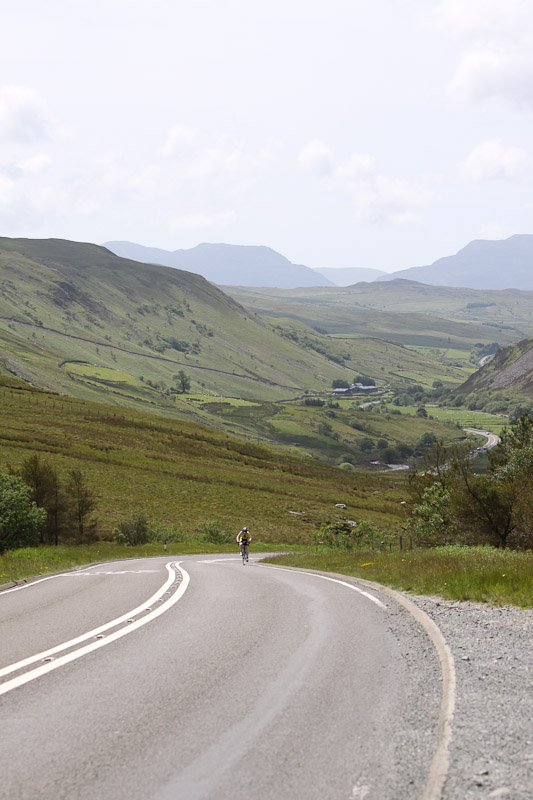 Part of the bike route, from the top of the biggest hill

At the end of the bike leg the pirate support was once again in full force and was most appreciated.

My bike time was around 30 minutes quicker than in 2008. This is partly due to mechanical issues I had last year (a slightly buckled wheel which rubbed against the brakes every rotation!) but also because of the large amount of cycle training I’ve done this year as part of my Ironman preparation.

Transition 2 is the quick one - although I took longer as 1) someone had put their bike where mine should have been, and 2) as my bike/saddle is so high I had to lift and angle the bike into the rack. A little frustrating but nothing I could do about it.

Bike shoes and helmet off, run shoes on (elastic laces makes this so much easier) and grabbed a couple of gels.

Onto the run… This is a tough run course as you can never get into any decent rhythm. After about 2 miles I overtook Hollywood. I said he’d probably catch up with me again as I needed the toilet. Low and behold, a few minutes later when I decided to ‘water’ the local bushes as I set off running again I heard a shout in the distance - “Bloody Amateur”. 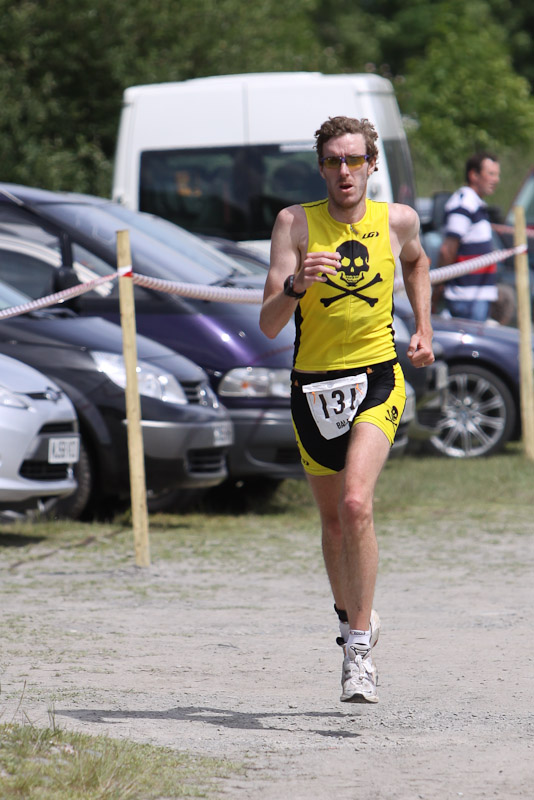 At this point I was pretty thirsty and the first few water stops I just took water. As we reached the turnaround point (at 6.5 miles or so) I slowed to a walk - had a gel and then a water and a high-five drink. Then it was back to running.

On the way back I could see and cheer pirates who were coming the other way - its great to give/receive encouragement and many people knew my name (I just wish I was good with names in return - but in the end just shouted ‘Go Pirate’ a lot!).

The run was tough but I stayed strong to the finish and completed the run in a time of 1:32:45, which was eight minutes quicker than last year. According to my GPS the run was 12.38 miles and my average pace was 7:27 miling.

Although my swim wasn’t great, the bike and run more than made up for it and I didn’t make any silly mistakes in transition.

This year the race was designated the 2009 British Middle Distance Triathlon Championship and as such attracted a much stronger field of athletes. Even though, I finished much much better than last year and its a sign that the training and work that I’ve put in during the last few months is paying off.

Finally I had a look at the average times for the swim/bike/run compared with last year….

So, the swim average time was slightly slower - which is interesting as there was a stronger field of competitors, but the choppy water conditions made the swim much slower for most people. I feel better writing this now!

As for the bike and run, the conditions were similar this year (windier, but not as hot) but the strong field made the average times significantly faster.

All in all I left Bala happy with how things went. It was a tough race, and I can’t say I really enjoyed it (although I do smile in the photos), but the result was there and its a great confidence boost for Ironman Switzerland next month. Sharon took many many photos and most of them can be seen at this facebook photo album.