After riding my first sportive cycling event (mass participation ride, but *not* a race) in snowy weather in February, a 107 mile ride at the end of May was sure to mean more favourable weather. Well, favourable meaning blimmin’ hot! It was a scorcher.

Sharon (as support crew), Nicola and myself were up bright and early (left home at about 6am) and drove to the start, which was only about 50 miles away. Today we were cycling the Chiltern 100 Cyclosportive - which the event website describes as follows:

The Gran Fondo is an uncompromising road romp across 171 km of the toughest and most picturesque terrain in the Chilterns. It is relentless in its pursuit of hills, 21 in all, routinely climbing at over 15% grades. From Great Missenden to Dunstable Downs, then SW for the shake down along the scarp slope where the biggest and steepest hills await you. From Watlington return to Great Missenden over the final 6 leg numbing climbs. 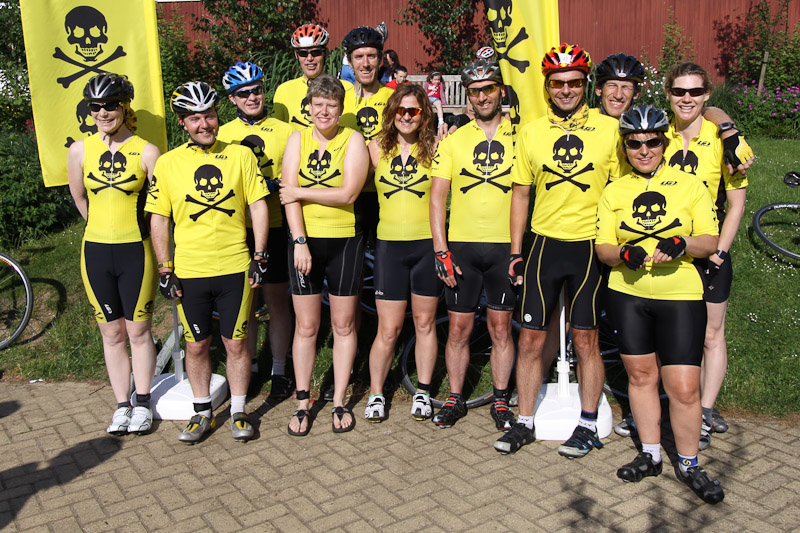 There were a number of fellow members of the Pirates Ironman triathlon ‘club’ and it was good to catch up with some who I’d not seen for many months. After a team photo it was off to the start.

My plan for the event was to not go in fresh - I’d run a steady 18 miles on the Friday and swam/ran the day before. This was going to be a great test of my bike fitness. I also made a conscious decision not to draft off of any other riders today - when I take part in my Ironman event in July you’re not allowed to draft - so I didn’t want to do it today.

After setting off, within about a mile we hit the first hill - from here on in they didn’t stop! To be honest they weren’t that bad (at first) and the first major hill came at about 23 miles - on a road that heads up to Whipsnade Zoo. It was great to see a pirate support crew with flags and cheers near the top - they were ace and it really is great to see people cheering you on en-route.

From here it was just keep pedalling… there was a ‘feed station’ at about 36 miles - I refilled my drink, grabbed a couple of bananas and an energy bar (they only had banana flavour!) and then set off.

At about 43 miles I missed a turning - of course I didn’t notice this for a mile or so when I came across some other riders examining maps and discussing the route! A local cyclist stopped and told us what we did wrong so we all headed back and got back onto the course. This cost me over five minutes. Darn. Never mind - its all good training. 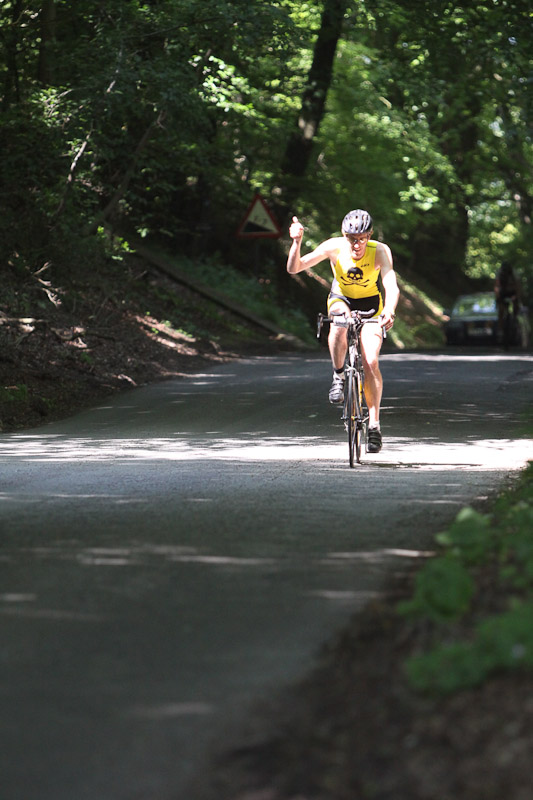 At around 60 miles we came to Whiteleaf hill - this is known by most people who’ve done the ride before as being the toughest climb. It was pretty long and very steep. My legs were feeling good and I found myself once again in my smallest gear and just got on with the job at hand. One thing I tried to do today was stay in the saddle on the climbs - and that was something I managed to do every time. The only time I got out of the saddle was when I wanted a few seconds of ‘something else’ on one of the flat parts of the course.

At the very top of Whiteleaf I saw the familiar sight of a yellow skull and crossbones - it was Sharon - who’d been directed to this nasty little climb. Obviously she was there with the camera to capture the moment!

I very nearly stopped when I passed Sharon - but she told/ordered me to get on with it! The ride down the hill was pretty awesome - the road was super smooth and I almost hit 50mph!

At around 72 miles, naturally at the top of yet another steep hill, was the second feed station, and the pirates had moved to support here. I stopped once again to stock up on drinks, and also took a jaffa cake and a couple of tuc biscuits. Nice. Oh, and a cheesy straw thingy from MD.

Back on the bike for the final push. In the second half the hills seems to come quicker and harder but I just got on with it, and eventually there was a ‘10 miles to the finish’ sign and then a ‘4 miles’ signpost to the start/finish town (Great Missenden). 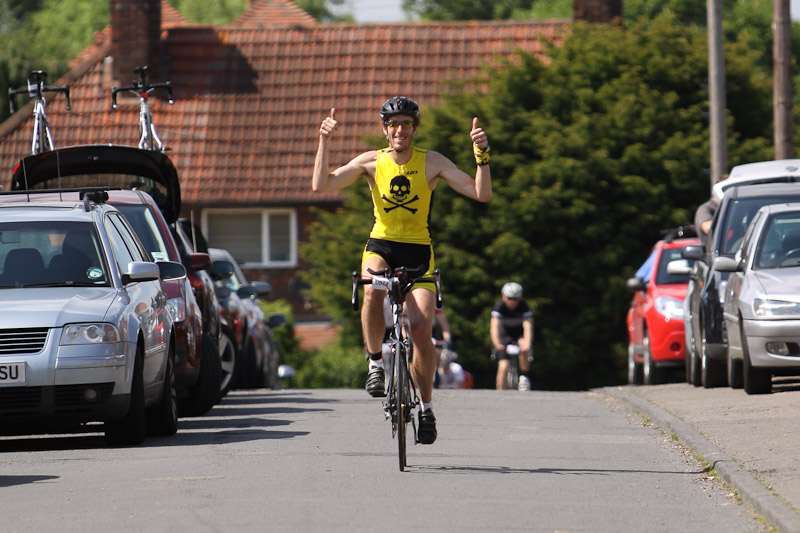 As I headed into the finishing straight I saw Sharon in the distance and gave it my best Tour de France stage victory salute!

My official time was 6 hours 47 minutes and 16 seconds. Actual riding time (my GPS stops when I do) was 6 hours 35 and 8 seconds - so not much hanging around there. Just a couple of feed stops and traffic junctions.

Overall I think I had a really strong ride - very few people overtook me (and most of them were in ‘chain-gang’ drafting groups). If I was a bike team racer then that would be the way to do it, but I’m an Ironman (in training) and it was better for me to ride alone.