By David on 17 May 2009 david ranelagh harriers

So, another year, and I’m back in Bognor Regis for the annual 10k race. This year will be my sixth running of the race in a row and I think it’s safe to assume that this is my favourite 10k race. The past five years I’ve got faster and faster on the course but this year I suspected things would be different. I’d done absolutely nothing in the way of speed training (other than the weekly 5k parkruns) specific for 10k distance and off the back of the London Marathon (only three weeks ago) and all the Ironman training that I’m doing my legs are not in the right place to run personal best times!

On top of this lack of training, I’d not tapered - in fact the last few days were…. Wednesday 115 mile bike ride, Thursday easy 4.5 mile run, Friday 14 mile long run. On Saturday I was up at 6am, swimming 3km in the local lake at 7am, then ran 19:50 at Bushy parkrun at 9am. To top this off I decided to cycle the 55 miles to Bognor - into pretty much a direct headwind the whole way.

So, Sunday morning came and so did the wind and rain. It was absolutely pouring. At 10am (race start 10:30am) it was chucking it down (as it had been for a few hours) but then within the space of a couple of minutes we had clear blue skies and beautiful sunshine. Result.

I’d given myself a target time of anywhere near 40 minutes (had it not been windy) but today it was blowing hard - looking at the CHIMET wind archives the wind averaged around 20mph during the race - and would be directly against us for the second half of the race - which is fully exposed to the elements - not ideal to say the least.

My plan, even though my legs were buggered from my recent training (and yesterdays swim/run/bike!), was to run at around 40 minute pace (4 minute km’s) and expect to have a bloody tough run up the promenade into the wind for the second 5k.

I set off fairly close to the front and after a couple of km’s I seemed to be gaining on people and was slowly moving up the field. Was I running too fast? Deep down I expected to pay for this at some point in the second half…

I got to 5k in about 20:06 (although my GPS splits put me as being quicker, but a handheld GPS is never going to be as accurate as a official course measuring wheel) and awaited my fate. I was still picking people off one by one which was a great motivational boost.

At about 5.5k we turned up to head onto the promenade section where things got tough. At this point I decided to push hard and get on with it. The faster I run, the sooner it would finish - right? 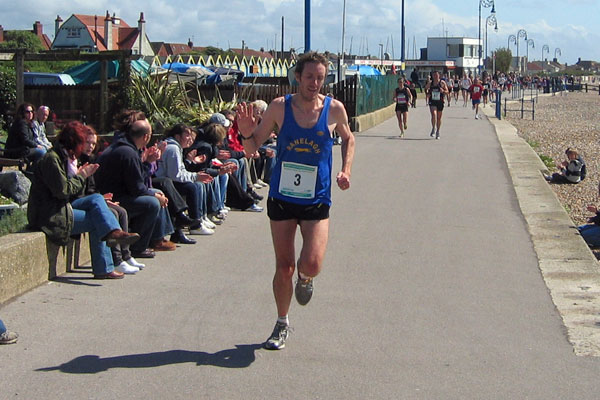 Just about to turn left at around the 7k mark

I was hoping to take advantage of runners ahead of me by sitting behind them in the strong oncoming wind, but everyone I caught up seemed to be ‘going backwards’, so I had to push on ahead of them. This continued pretty much the whole way to the finish.

Just before 7k I caught up with a blind runner who was running with his guide. It was the trickiest part of the course when I came across them and the guide was awesome - “hold my arm…. sharp right turn coming up…. slight decline then incline…. long sweeping right turn” - brilliant stuff. I was most impressed.

At about 7.5k I was running completely on my own - the next person ahead I counted was over 20 seconds away. It was tough. Within the next km I’d caught the chap up ahead of me and was then targeting runners in front of him.

As we head into the final kilometer the crowd support gets busy which was brilliant - I pushed on and kept picking people off. One chap decided he was having none of it and sprinted past me a few seconds later. He then started to slow down before the final turn but managed to just stay ahead. Nice finish.

I crossed the line in 40:24 and was extremely happy with the time. I pushed hard and with the state of my body before the run and the strong winds being able to run 40:24 was in my eyes a great time. My overall position was 55th out 1393 finishers.

With a bit of luck I’ll be back next year, and pushing for a time around 38-39 minutes…