So, trying out different parkrun’s seems to be becoming a bit of a habit now… This week Sharon and I found ourselves at the South Manchester parkrun - based in Platt Fields Park in, er, South Manchester.

After a lot of overnight rain the weather cleared up, but there was plenty of evidence on the ground - many of the paths were waterlogged! If you look at the course map at the parkrun website your head will probably be spinning with confusion trying to remember the course. However, the course was superbly marked and marshalled, so there was never any chance of taking a wrong turn.

After last weekends Epsom 10 miler when I hobbled home in pain this past week has been interesting. On Monday and Tuesday the only way for me to get down the stairs was sat on my backside and sliding down the stairs one by one. Things have made a lot of improvement since then and I’m walking fairly normally now, although still feel some pain in my left foot when walking.

My plan for today was to just get round the course. I’d threatened to run with Sharon - which I thought she’d enjoy as its our 11 year wedding anniversary today - but she didn’t want any of it!!!

The parkrun is set in a lovely park area with all sorts of playgrounds, bowling greens and a large lake. It’s a great park in a very accessible location (and a huge car park right by the start).

With the event currently run by volunteers from the University of Manchester this possibly explained the large number of young people/students taking part. Sharon and I were some of the oldest runners there! We were most impressed to see these young students out and about before 9am on a Saturday morning. When I was a student I would always end up watching Saturday morning TV at 9am on a Saturday. Then again, I was over 17 stone in weight and didn’t know the meaning of the word exercise.

After a detailed briefing (follow the yellow arrows for the first 3.5k, then follow the pink ones, ‘homeward bound’, to the finish) 77 runners set off on this, the third South Manchester parkrun. 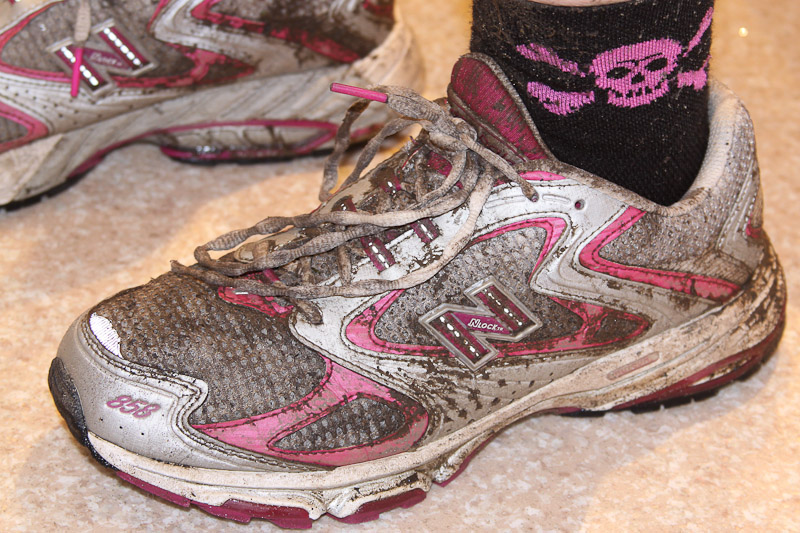 I started slowly as I had no idea how my foot would be and I made a conscious effort to stay off of my forefoot whilst running as much as possible. After a couple of hundred metres we turned onto a smaller path and this is where the water logged surface was at its worst. The path was wet, and the surrounding grass was muddy. Wherever you ran you couldn’t avoid getting wet and muddy. I really wasn’t expecting this but it added a little bit of excitement to the run!

I was probably in the mid 20’s position wise and as I settled in I drifted further and further up the field. There were marshals everywhere, all really smiley and with some of them jumping around (partly just to stay warm, as it was a cold morning). I slowly moved up the field, my foot not giving me any real cause for concern (although it did hut a bit towards the end), and crossed the line in 8th place with a time of around 20:24 according to my watch.

After I finished, I went along to support Sharon (the course is great to see other runners multiple times). I ended up talking to Linda one of the Race Directors (who was lovely and friendly) and we want to thank her and her team of super-friendly marshals for running an excellent event.

Sharon had an average run - her shoes filled with water early on because of the puddles and now we are back at the hotel, they weigh so much! Sharon liked the cross country feel of the course - but wished she had brought spare shoes with her…off to the shops now :)