I’ve been looking forward to this race for two years. Why two years? Well, I ran it for the first time in 2007 and couldn’t wait to run it again. The weather was meant to be terrible but it actually held out pretty well. We’d had lots of rain during the previous days so the ground was going to be soft and this meant I was back in my cross country spikes again - this time for approximately 7.5 miles round Wimbledon Common.

Ranelagh fielded a massive 60 runners (although one didn’t finish) to Thames’ 34 which put us in a great position - meaning that almost all of Thames’ runners would count in the scoring, but only the fastest Ranelagh runners would count.

I wanted to have a good run so after a reasonable warm-up I pushed of fairly hard at the start - part of the reason for this is that early on you have to single file through some of the woods within Wimbledon Common and I didn’t want to be held up by slower runners. This was a great move as although we slowed down through the tight spots - it was still a good pace. 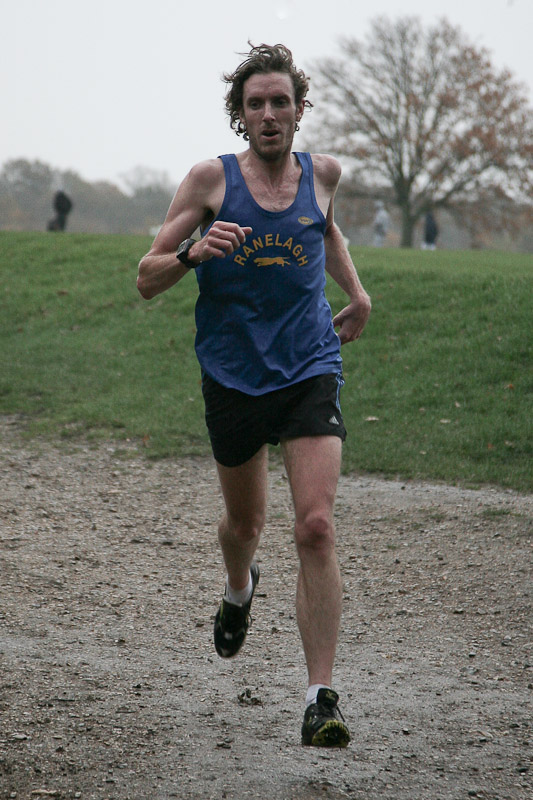 About half a mile or so in Chris O. pulled over on a steep downhill - he must have pulled something. I kept up a good pace and carried on. From here on I didn’t really see any Thames runners - I was mostly running alone.

The course is very varied, with plenty of grass, mud, leaves and stony paths - and the paths are tough in spikes - you have to run right near the edge on the grassy/muddy bits. However, on the muddy leafy terrain spikes are suberb - you can forget about any thoughts of slipping up and just get on with the job at hand. There were some great obstacles on the course - large branches to practically climb over, others to duck under, and streams to leap across. Wimbledon Common is ace!

Just after 3.5 miles in I could hear footsteps coming up from behind and before long John H. and Chris O. edged past me. John said something along the lines of ‘stick with us’ - and that I did. It’s much easier running in a group as you get to work off of each other (and in my case draft when possible!). They were clearly running stronger than I was so I just hung on to them.

About a half mile from the finish there’s an pretty steep downhill section and whilst flying down here I almost took a really nasty tumble. Chris, who was a few seconds behind me, said that I did absolutely everything but fall flat on my face. My arms and legs were flying in all directions and I managed to stay upright. Phew.

As I ran into the finish I was in 17th position and the clock said 47 minutes 24 seconds which I was really happy with. Two years ago my time was 47:46, although this year the course was ever so slightly longer because of a couple of misplaced directions. Overall Ranelagh convincingly won the match which was well worth celebrating - which we did at a pub in Putney with a number of other Ranelagh/Thames runners until late in the evening.

All in all a superb afternoon/evening out.