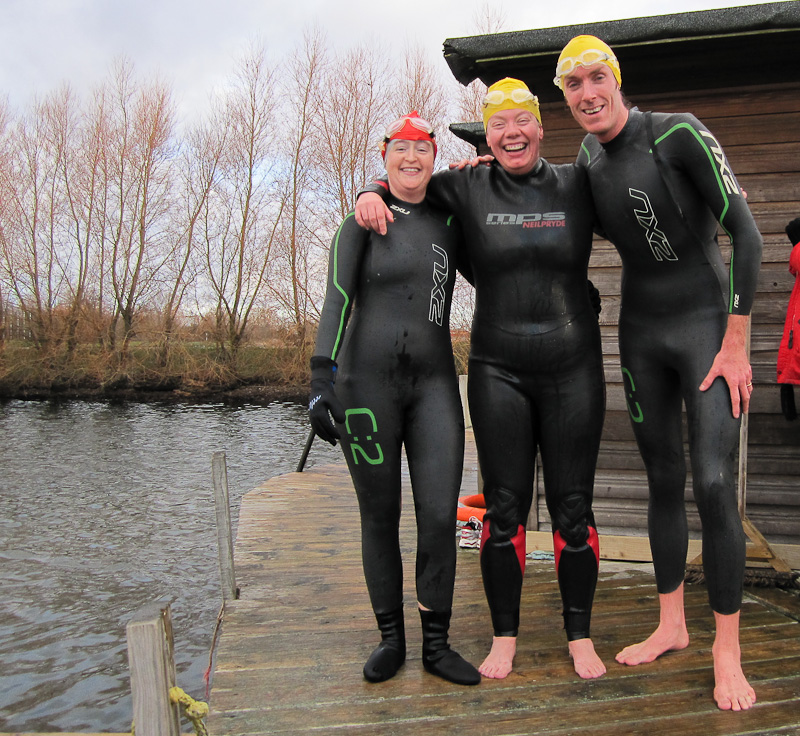 The past couple of weeks have been extremely cold with snow and ice being in the headlines almost continually. What better way to see it for yourselves than to go for a swim in a lake!

During the warmer Spring/Summer months I did most of my triathlon swimming in open water - mostly at Princes Club in Bedfont, West London. In 2008 they held their first annual ‘Polar Bear Swim’ and 16 swimmers turned up. For 2009 they wanted to get 50 so I had to put my name down for this piece of post Christmas idiocy!

Sharon, Kirsty and myself arrived in plenty of time to get into our wetsuits (after some squeezing and pulling following the numerous festive feasts) and then listened to the briefing. I’d say that out of the 51 who turned up there were about 10 or so who chose not to wear wetsuits - and in the 2.5 degrees (celcius) water temperature they were extremely brave (or foolish!).

There was a line of buoys about 50m ‘off shore’ and the idea was to swim to the imaginary line between the buoys, turn around and swim back. Simple.

We all lined up on the jetty and got ready to dive in on the call of ‘GO!’ I never really dive straight into water and swim, especially when its that cold but today I just got on with it. My goggles had steamed up before I’d even got them wet but that was the least of my worries.

As the starting signal was made I dived in and pushed on with full-on head-in-the-water frontcrawl as fast as I could. I could barely breath in the cold and was absolutely freezing - but the adrenaline took over. There were a number of swimmers around me and there was a lot of kicking and shoving going on - just like at the start of a mass-start triathlon swim - I couldn’t believe it!

As I got to the turnaround point I eased off a little bit and tried to catch some air - which was really difficult when your feet, hands and face are slowly turning to ice! I swam back to the jetty at a more leisurely pace and got out of the water.

Once out of the water I stood by the jetty to help others get out and I cheered Kirsty, Sarah and Sharon as they returned to dry land. After getting out of the water we jumped in the sauna for a few minutes to try and warm up and get over the ‘fun’ we just had!

I think I’ll stick to open water swimming in the summer months (although I’ll happily go back for this just once a year - and could be tempted to go non-wetsuit next time!)…