Black Park Country Park near Slough, to the west of London, hosts one of our ‘local’ parkrun events (15 miles away), and one that we’d not yet been to. The first run was in July last year and this week was the 28th running of the event.

After some discussions last week at Bushy parkrun a few of us decided to ‘tick this one off of the list.’

First thing Saturday morning (7:30am) Sharon and I collected Kirsty and headed out west to Black Park parkrun. Pre-run toilets were all locked so although some people chose to ‘water’ the plants themselves, we chose to wait till the obligatory post run coffee shop visit.

My running has pretty much been non-existant of late. I did a parkrun on the 28 November, then one on 1 January and nothing else until today. My foot still hurts all of the time, but doesn’t seem to get better (or worse) - so I’m kind of thinking that this is probably just how its going to be from now on. As the Black Park course is mostly soft ground and any running I plan on doing right now will be on soft ground, I thought I’d give this a go. I had no plans to try and run fast (I’ve forgotten how to anyhow!) so just wanted an easy run…

I set off close to Kirsty and the main mass of runners who finish between about 22-28 minutes. We had an easy first mile and then I started to warm up (actually, my hands took a couple of miles to get vaguely warm!) and speed up a little. I slowly but surely worked my way past people and at the same time ensured that I wasn’t racing or pushing too hard. 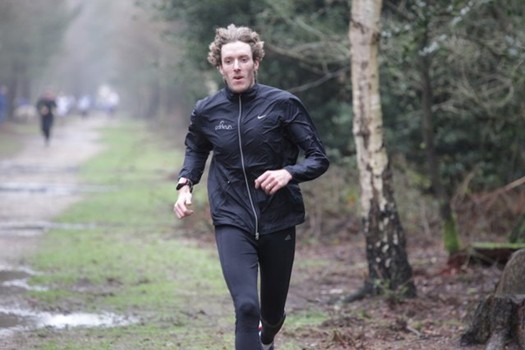 David a few seconds before the finish - photo: George Mardall

After about 20 minutes I made the turn into the final long long straight and just about managed to glance back to see Kirsty running strong (having a great run by the look of things).

I crossed the finish line in 24:26, so only 6 and a half minutes away from my PB but happy to have got round with no additional foot pain. Kirsty came in a few seconds behind me and then Sharon came in a few minutes later.

As we waited in line to register our positions we chatted away, congratulated Darren ‘250 parkrun’ Wood on his 3rd place and generally admired the surroundings.

The parkrun is located in beautiful park and I’m going to try and make sure I head back there in the spring to run or at least take some photos.

Following the run we headed to the coffee shop, had a drink and refuelled ourselves before going to the local swimming pool for a swim…