This weekend Sharon and I are down on the south coast as I’m taking part in the Bognor Prom 10k road race on Sunday. Naturally I cycled the 60 miles down to my parents house (whilst Sharon chose sensibly to drive!). That was Friday, so what next…

6:15am on Saturday morning and Sharon and I jump in the car to head to Lakeside Multisports in Eastleigh for their second parkrun 5k run. Why so early? Well, as the run is organised by the same people who run an open water swimming session in a lovely little lake.

After being welcomed by a couple of lovely ladies at the swim ‘sign-in’ I donned my wetsuit and went down to the water where I was given a briefing (the water isn’t deep and if you’re in trouble just shout!) and sent on my way. Each loop of the lake buoys is a little shy of 400m and in my opinion its a great distance. There’s plenty of time to concentrate on your stroke and sighting, but also plenty of buoys to navigate round and with a ‘small’ lake there’s always plenty of people nearby - rather than being all out on your own in a huge lake. The water is also pretty shallow and as such it will warm up quickly over the coming weeks and months. Today it was 13 degrees.

After just over 2km of swimming I cheered on some of the competitors in an aquathlon (swim/run) that was taking place and then it was time to get changed and ready for the 9am 5km Eastleigh parkrun.

Sharon and I lined up at the start with just over 50 others and were given a briefing by Brett, the race director. We were then set off on our way. The course is lovely. You start by running round a couple of lakes, where there were plenty of fisherman and geese and their goslings dotted around the edges. After a right hand turn you head up a slight incline, through a wooded area and then have to content with the first obstacle - the local minature steam railway! Across the tracks and then you head alongside the tracks for a little while towards something called ‘the bowl’ - a little like a volcanic crater but without the lava, or something like that!

After running round the top edge of the bowl you cross the railway tracks twice more, avoiding any trains (!!) and head back towards the start. Two laps of this and there you go. The course is mostly gravel paths and grass, and expect a pair of trail shoes would be well advised for the winter months.

I’d left my GPS at home and was happy to run without it and just went at a medium/tough pace. After about a minute I’d settled into sixth place and just stayed there, running pretty much on my own for 4.5km.

Although I don’t yet know my finishing time (the results aren’t up), I believe it was around 19:30 or just under. No complaints there. UPDATE: the results are in and I finished in 19:46. Still no complaints.

In the afternoon I then went out sailing and then headed to the pub to watch the second half of the FA cup final football match! 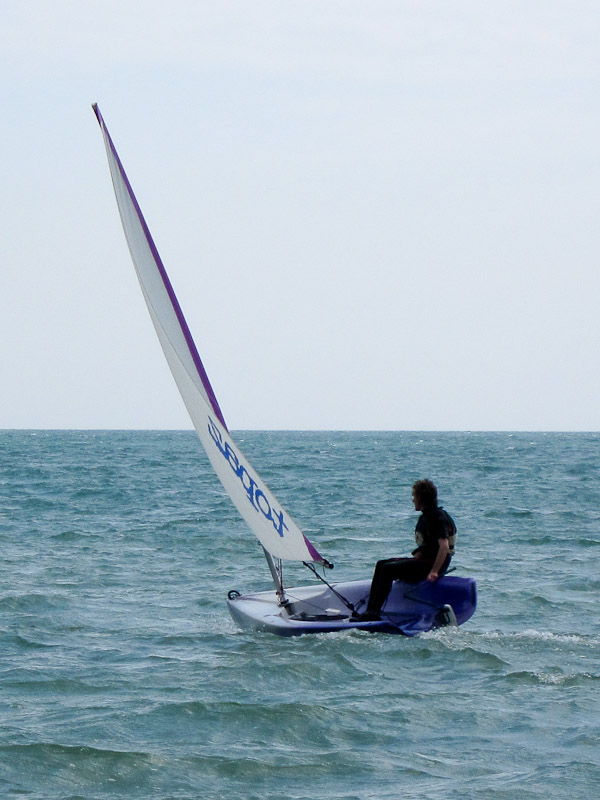 David out for a little sail in Sharon’s boat.