The Wedding Day 7k is a well supported local race held on a Friday evening at the end of July. For the history of the race check out my entry from 2007. After running in 2007 and 2008 last year I chose not to run as it was just under three weeks after taking part in Ironman Switzerland. I didn’t think it would be good to race so soon after.

Well, this year things are a little different. I’d competed in an Ironman 12 days before but earlier in the week of the Wedding Day race I thought I’d give it a go. I seem to recover very well from triathlon events and knew I had a good 5k in me after last weekends 18:32 at Bushy parkrun. I wondered what I could do over 7k.

For this race I have a time honoured pacing strategy - treat it like a 5k then hang on for the remaining 2k until the finish. Well, lets just say that I followed the plan like a treat!

After a short warm-up (and a 4 mile bike ride to the start) I made sure I was near the front row and set off close to Duncan and Chris from my club (Ranelagh Harriers). The pace was quick and we all raced off into the park.

The start of the Wedding Day 7k. Photo: Guy Watson

I knew we were going a bit too fast but this is the fun of this race - you know the last 2k is going to be painful so you might as well make it one to remember! As my watch beeped after a mile I glanced down and saw it say 5:41. Oops - just a little too fast. I turned to Duncan who was right beside me and said something like ‘I’m blaming you for this.’ His response was ‘I’m just following you!’

From here on in it was just hard running. Conditions were ideal - not hot although there was a little breeze in places. I found myself running very close to Joseph from 26.2 Road Runners Club who looked like he was running very comfortably. I was puffing and panting and really giving it some welly! Just after 2 miles I edged past him and tried to bridge the gap between myself and the runner in front - a runner from The Stragglers running club. It took almost a mile to get to him.

At the 5k point I looked at my watch and it said 18:02. Oops! That’s 9 seconds off of my 5k standalone PB. I knew for sure at this point that the final 2k would be hard hard work (hmn, much like the previous five were!).

I then drifted past Simon from Stragglers, we both gave each other words of encouragement and away I went. With just over half a mile to go Joseph came back past me and I tried to stick with him as long as I could. I couldn’t quite stick to him ‘til the finish but I certainly tried.

A few hundred metres before the finish I saw Roger W. supporting - he said something like, ‘take it easy David’ - he could see how hard I was working at this point. 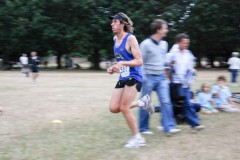 I then turned onto the grass area, raced to the finish and stopped my watch. My overall time was 26:25, a 19 second PB on my time from 2008 and I finished 19th overall out of 506 finishers. Brilliant. I was chuffed to bits with this - a great hard run. This is the hardest that I’ve run over a short distance for a long long time - my heart rate averaged 179 and maxed at 190.

As with all local races the Ranelagh Harriers ‘stats’ man and webmaster, Ken, was there making notes on everyone’s finishing times. He also had his list of estimates for people and had mine down at 29:08! Shocking. I went over to him and jokingly complained at his poor estimate and he commented something like ‘but you hardly ever race.’ Fair point. Also I have to admit that my previous Ranelagh races haven’t been raced hard at all - so his data will be a little skewed to how I’m really running at present.

The evening finished off with a beer, some food and watching some of the European Championship athletics on the TV in the cricket club in the park. Another great Wedding Day race done and dusted. See you next year.

PS. Saturday morning dawned and I put in a steady 19:08 run at Bushy parkrun. That was my running done for the rest of the weekend. A good 60 miles on the bike on Sunday was all I could manage…

« The Musings of an Iron Sherpa...
Goodbye to the Fastest Finisher shield... »
© David & Sharon Rowe - rowerunning.co.uk - email me