By David on 1 January 2011 david parkrun

I’m not much of a fan of New Years Eve. It’s only another day/evening, and by the look of some of the ‘trollops’ as we drove through Twickenham and Richmond at about 12:30am this morning it looked like an excuse to squeeze into a tiny dress that probably didn’t fit you before Christmas and really doesn’t fit now! Anyway, enough about that.

New Years Eve was spent round a friends house for a few nibbles, a little drink and then being turfed out onto the street at about 10:30pm (yes, the ‘party’ ended at 10:30pm). We then headed to the top of Richmond Hill, watched West London light up with fireworks at midnight and then headed home to sleep.

New Years morning at 9am and I was on the start line at Bushy parkrun along with over 360 other runners. However, a number of us had bigger and bolder plans than just the one parkrun this morning.

With Banstead Woods and Richmond parkruns starting at 10am quite a few runners were planning on running Bushy and then one of the others. Danny Norman and myself opted to try and do the ‘double’ with Richmond parkrun and make it more interesting by running between the two events.

Google maps plotted the most direct route on foot to be about 3.9 miles (as opposed to about 5.2 miles by car) so as we lined up shortly before 9am it was a relief that the announcements were kept brief and we were set off on our way bang on time (if not a minute before).

A solid run saw me cross the finish line in 19:09 (23rd) and as I walked through the funnel to collect my finishing position I was being shouted at to ‘hurry up’ by Danny who’d finished over a minute beforehand. After registering my position we collected our ‘superjuice’ (er, Lucozade Sport drinks) and headed off to Richmond. We were on our way at 9:20am. Next stop - Richmond.

The run to Richmond was pleasant enough - the roads were empty which enabled us to take the ‘racing line’ at every opportunity! We arrived at Richmond Park at about 9:48am with plenty of time to spare, and to get cold waiting for the start! A few minutes later we were joined by Oliver Garner - another Bushy runner who’d run to Richmond as well - making it the three of us who ran - rather than the run/drive/run approach favoured by everyone else. 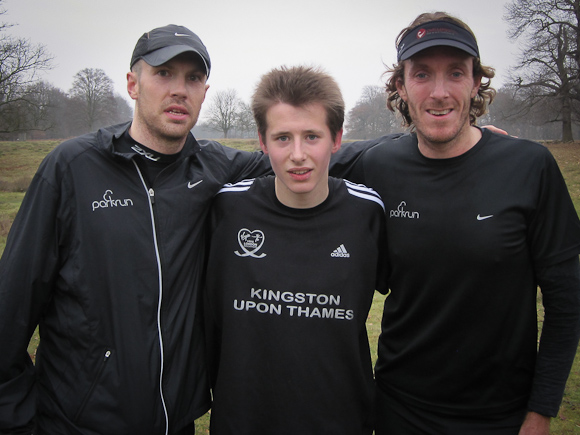 Richmond parkrun set off just after 10am with a field of 170 runners. I ran most of the 5k with Paul (Mr parkrun) and after another solid effort crossed the line in 19:54 in 18th place.

The best part of it all was Sharon stood at the finish line with a warm jumper and some gloves to put on.

A solid 10 mile run with two parkruns - a good start to a new year.

For information London in 2011 was currently the only place to ‘do the double’ and 51 parkrunners completed the challenge with the following combinations… Bushy/Richmond, Wimbledon Common/Banstead Woods, Bushy/Banstead and Bromley/Banstead. I’m sure this time next year there will be more options available.