Not The London Marathon 2011

Two years ago it was suggested that a social run around the Bushy parkrun 5k course a few weeks out from the London Marathon would be a great little motivator for those long runs and also to get to share a long run with people who are running different distances - so not just for the 20+ miler club! Not The London Marathon was born! You can read about 2009 and 2010 elsewhere on this blog.

After December’s last minute cancellation of the Luton Marathon my training eased off over Christmas and I’ve been getting back into it again in advance of the Brighton Marathon - which is in four weeks time on 10 April. This means that right now I’m reaching the peak of my weekly long run distances - which if anyone is interested I count back the weeks from race day and my weekly ‘long’ run is around the following distances - 26.2 (race day), 12, 18, 20, 20, 20, 20, 19, 18, 17, 16, and so on.

This weekend was my third 20 miler. This was the weekend of Not The London Marathon (there’s no fixed date for it - just a mutually agreed date ‘a few weeks’ back from ‘London’). My plans went up in smoke when my dad called me on Friday evening and asked if I could go down to their house on the south coast and help him with some work being done on their house. My plans therefore made a sudden change and I ended up running my long 20 miler on Saturday morning - early - with Bushy parkrun thrown in a few miles from the end to give me a good hard push and to make me finish the run on (very) heavy legs! Great training.

It was a shame to miss the thirdinstallmentof NTLM but thankfully Sharon was around and went along to do her long run (not quite 20 miles I must add). Naturally of course she had to get the annual photograph so here you go…. 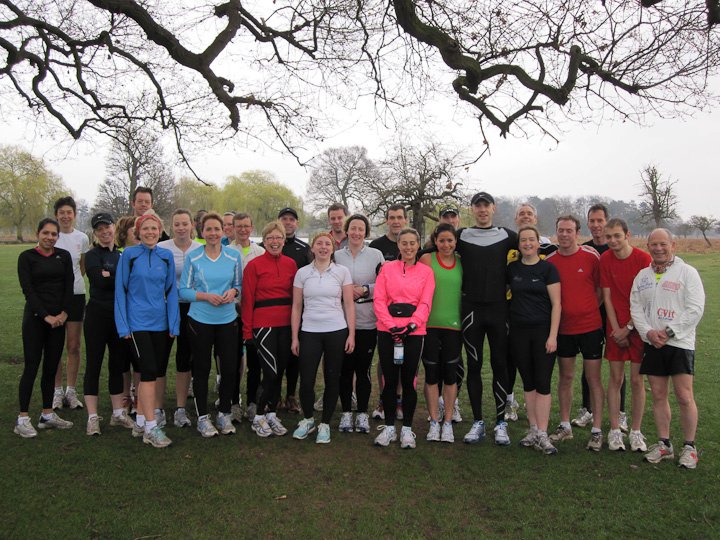 My Sunday run was three miles (just to give the legs a little spin after Saturday’s long run) along the sea front.

As for my marathon training I’d say that it is going fairly well. My regular run consistency isn’t as great as I’d like - although I am getting in exercise pretty much seven days a week - and when I’m not running I’m out on my my bike - normally on my 28-ish mile a day commute into London where I’ve been working so I’m not overly concerned if I don’t get a run in as often as I’d like. I’m currently running 3-4 times per week on average - but as I said when not running I’m getting in a couple of hours or so on the bike.