I’m a little parkrun addicted. If you have one near you then you may find them addictive as well. In addition to a great 5k speed session they’re fantastic for race practice, pacing, strategy and more. I’ve also found them to be fantastic to include at the end of long (18+ mile runs) during marathon training - you just have to get up very early to get a long run mostly complete before 9am!

“Started in 2010, the idea is simple - On the first Sunday after the longest day of the year, to visit as many parkruns as possible. But while the potential total distance is quite large (35km or 21.7 miles), this isn’t a heavy duty running event, it is first and foremost a social day - there’s no official timing, runners can turn up at as many (or as few) of the runs as they want, and do as much of the courses as they want.”

In 2010 I didn’t take part during the main activities as I was out for a long 90+ mile bike ride but I did run the final run in Bushy park and go for pizza afterwards. This year I planned to run all the runs, with the added challenge of cycling between them all. This was an easy decision - although I’m sure it would be tough later in the day the beauty of being on the bike mean that traffic/parking would not be an issue, especially in places such as Richmond Park in the middle of the day.

So, just before 9am on what was to be one of the hottest days of the year (!!!) around 50 runners lined up at Bushy parkrun for the first of 7 5k runs, with a little bit of driving/cycling between them. As I was on my bike I firstly had to find someone to look after my bag of supplies (suncream, sports drink and food) and found fellow Ranelagh Harriers member Ted - who gave me some room in the boot of his car :) 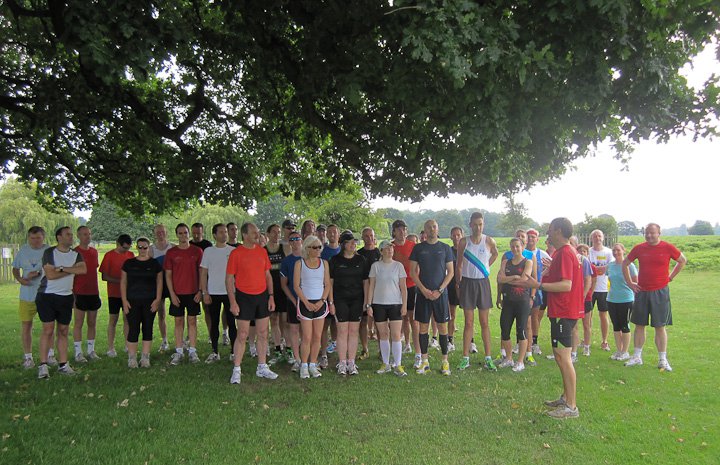 I ran Bushy parkrun fairly steady knowing that this would be a long day. It was a fairly relaxed run and once we got to the end it was off on the bikes in convoy with about seven or eight others as we headed to Bedfont Lakes parkrun. 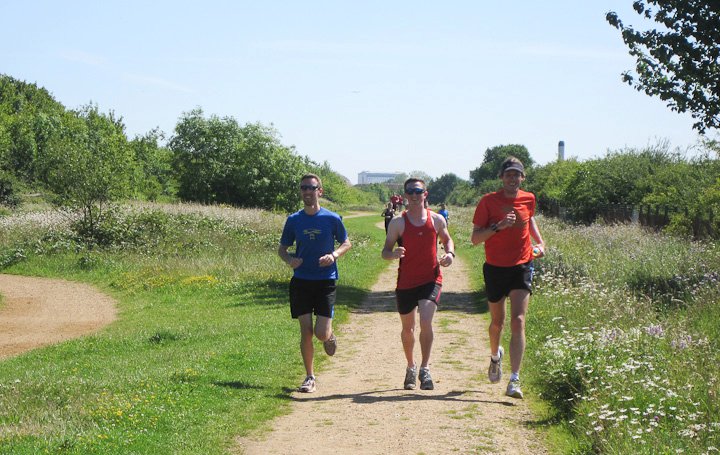 The bike ride to Old Deer Park took quite a while and we arrived at about 11:50am - with only a few minutes to spare. Us cyclists were lucky - we had no trouble with traffic. Drivers on the other hand had a nightmare - the combination of a ‘Race For Life’ event taking place in the park and an accident on the A316 road very close to the park which closed the main road made it very difficult for some runners to get to Old Deer Park. Some parked their cars about a mile away and ran to the start, and others headed directly to Richmond Park (no doubt to join the queues getting into Pembroke Lodge car park!).

At midday those of us who were at the start decided that we needed an alternate course because of the park being so busy with ‘Race For Life’walkers runners. We chose to run to the Thames towpath and then do an out-and-back route of 5km. Thankfully this was fully shaded and it was much more pleasant than it would have been had we been running the usual Old Deer Park parkrun course.

Now, because of the traffic problems my supplies bag was not at the park so my food and drink was nowhere to be seen. Thanks to fellow runner/cyclist Martin he said he’d arrange to allow Ted to park his car in his work car park right by the start of Richmond parkrun and we’d all hopefully meet there before 13:30.

Danny and I gently made our way to the meeting point and I had to stop at a newsagents to get a bottle of coke and some water to drink. It was hot out there and I hadn’t drunk enough. We found some shade where we eventually parked our bikes and waited in the hope that Ted would arrive with the car. About 15 minutes before the start of the parkrun he appeared so I stuffed down one of my sandwiches (a lovely chicken and bacon wrap), had a drink and topped up the suncream. We then strolled over to the start.

Richmond I’d say is the toughest of the courses because of the long uphill drag to the finish. A large group of us set off and before long I found myself running with Paul Sinton-Hewitt, the founder of parkrun. We chatted away and then he pushed on right towards the finish. I was pleased with my run - especially as after four runs down I’d ‘broken the back’ of the days running and was getting closer to the finish.

Danny, Martin and myself made our way on bikes to Wimbledon with plenty of time to spare before the start. Another cup of coke later and we were off. This was a fairly uneventful run - nice and shady although I did almost get hit by two dogs that were in the park and decided to run directly in front of me!! One of them so so nearly made me fall over.

All the cyclists regrouped after Wimbledon and headed to the Hawker Centre in Ham, which was the start of Kingston parkrun.

Before the start of Kingston I met up with my ‘supplies bag’ and took some more drink, food and ever important suncream. I think my ‘stomach of iron’ meant I was able to eat just about anything and get on with it - even with a few minutes to spare before the start. I did get a bit of a stitch during a couple of the runs but just pushed on and ran through it.

I was happy with this run and pushed fairly hard throughout. About 15 minutes after finishing a few of us jumped on our bikes and headed off to Bushy for the finale.

The atmosphere was great at Bushy. A few people who were there at 9am and were busy elsewhere during the day came back to support at 6 and we had time for a couple of group photos.

Run wise I found myself running along with two others (Ian and Tim) at the front of a (albeit unofficial) Bushy parkrun. I’ve never experienced that before and probably never will. I was pushing hard (well, this was the final run of the day) but just couldn’t keep up with the leaders.

About 1.5 miles in Paul Sinton-Hewitt made another appearance (he hadn’t run since Richmond earlier in the afternoon) and raced past me. I couldn’t keep up him…. well, until he started to fade that is (!) and I dug in and pushed on. Perhaps it was a combination of this being the last run of the day and the promise of a free beer at the finish line in a cool-box that kept me going! 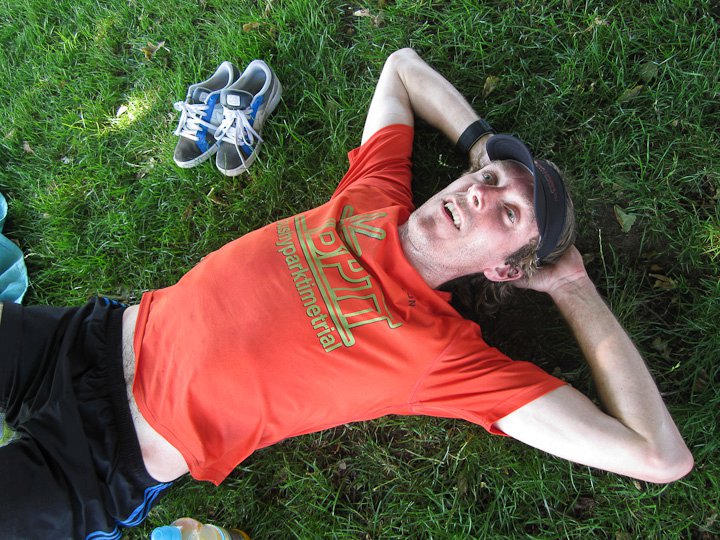 I then watched all the other finishers come in and then we slowly headed off - with a number of us heading for a well earned pizza and beer in Teddington. It was a great day out and one that I’d thoroughly recommend to others.

So my complete times were as follows:

Total running time was around 2 hours 39 minutes for the 35km (21.7 miles) - an average pace of 7 minute 16 seconds per mile. Add onto this the stop/start nature of the event and the cycling in between (of over 30 miles) and it turned out to be a pretty tough day.

Of all the starters there were 19 runners who completed all seven parkruns and there were five of us who ran them all and cycled between them all. I was one of the five :) 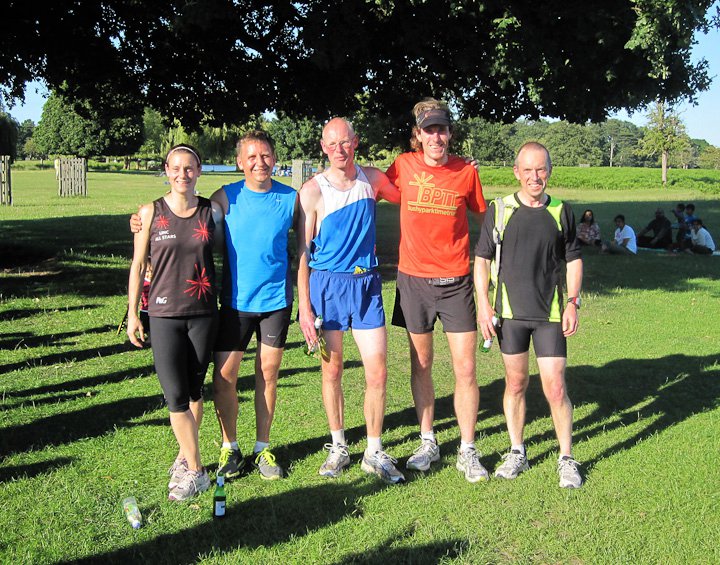