So, lets just say that my swimming has been rather slack as of late. The last time I swam was on 2nd May and here we are seven and a half weeks later and I seem to have entered an aquathlon! This (the same as the one I did in 2009) is a reverse-aquathlon - i.e., a 5km run followed by a pool swim (426m).

I got a last minute entry and shortly before registration was dragged into a bit of a ‘smackdown’ with some friends (James, Danny and Stefan). Excuses were flowing strongly amongst us (Danny: “I can’t swim” – David: “I’ve not swum for weeks” – James: “My knee hurts”) but (multiple Ironman Lanzarote finisher) Stefan was keeping quiet.

The four of us registered in a pre-arranged order as this dictated your starting time (everyone was set of at 15 second intervals). Stefan, James, myself and then Danny, the fastest runner. This would hopefully ensure that there’s a bit of overtaking of one another during the run - and as for the swim… this is anyone’s guess!

After the race briefing we headed to Bushy Park for the run start. The race was set to start at 7:30pm and based on our running numbers we’d be starting just before 7:40pm. Danny requested a final toilet stop so I followed went with him for a bit of a warm up and thought I may as well go to the toilet as well. We jogged across to the toilets at the cafe in Bushy Park hoping they’d be open - thankfully they were. We both scrambled in, struggled out of our one-piece triathlon suits and did what grown men do in public toilets!

As we left Danny said we had 10 minutes to get to the start line. Plenty of time. We started jogging through the park and then I saw some of the runners who had started. Perhaps the race had started a few minutes early. Either way we needed to get to the start quickly as we were starting in positions 38 and 39 (with Stefan and James 36 and 37). We certainly pushed a bit to get to the start to find that we were almost late! Danny said we had plenty of time and showed me his watch that said 7:33pm. I then checked mine that said 7:38. We were off within a minute of arriving at the start, much to the amusement of some of the competitors behind us. 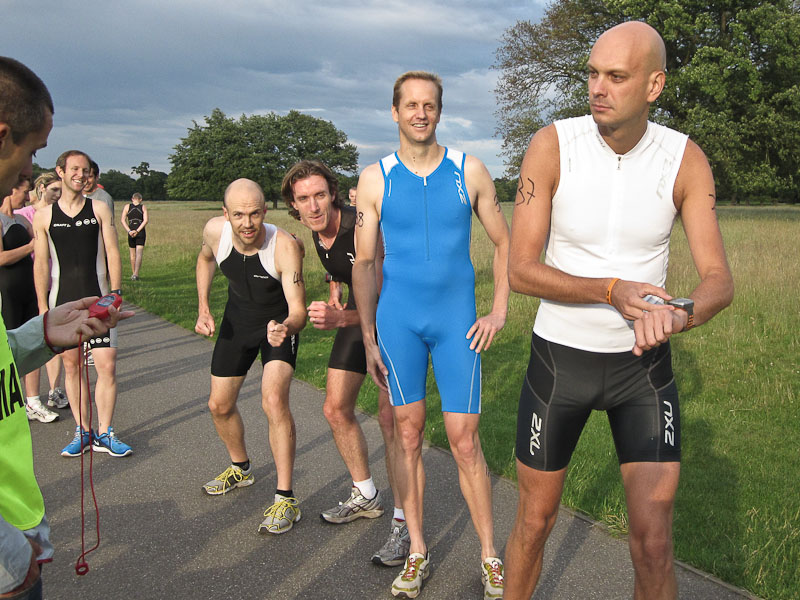 A little hurling of encouragement abuse at one another we pushed on… and were running a little too quickly for comfort! About 1.25 miles in I caught up with Stefan and slowly edged ahead. I needed to gain as much as possible on Stefan and James as they’re better swimmers than I am.

I pushed pretty much as hard as I could all the way to the end of the run leg. I had my goggles stuffed down the top of my tri-suit about 30 seconds before the end of the run I got them out and put them on ready for the swim. At the end of the run it was just a case of quickly getting my shoes and socks off and getting in the water for the 12 lengths of Hampton Open Air swimming pool. My 5k time (including ‘transition’) was 18:45 and was 6th fastest. The fastest run was 18:03 (by Danny).

I had a very uneventful swim. I passed Danny before not too long and only caught up with one other swimmer. During the second half the swim it got tough. I also had the added distraction of knowing that I was being chased down by James and Stefan. In fact I could see the blue of James’ triathlon suit in the lane beside me. This spurred me on to push even harder and I happily got to the end of the 12 lengths (and thus the race) before them (actually I could have lost 15 seconds to Stefan or 30 to James because of our staggered starting times).

Within about two minutes of me finishing we were all out of the pool absolutely shattered from a great little race. With the final results in my overall times were 18:45 for the run (6th fastest) and 7:51 for the swim (17th fastest). My overall finishing time was 26:36 which was 6th overall out of 70 finishers.

I’m happy with this performance and may well have another go next year. The added challenge of the ‘smackdown’ with friends made it even more enjoyable. 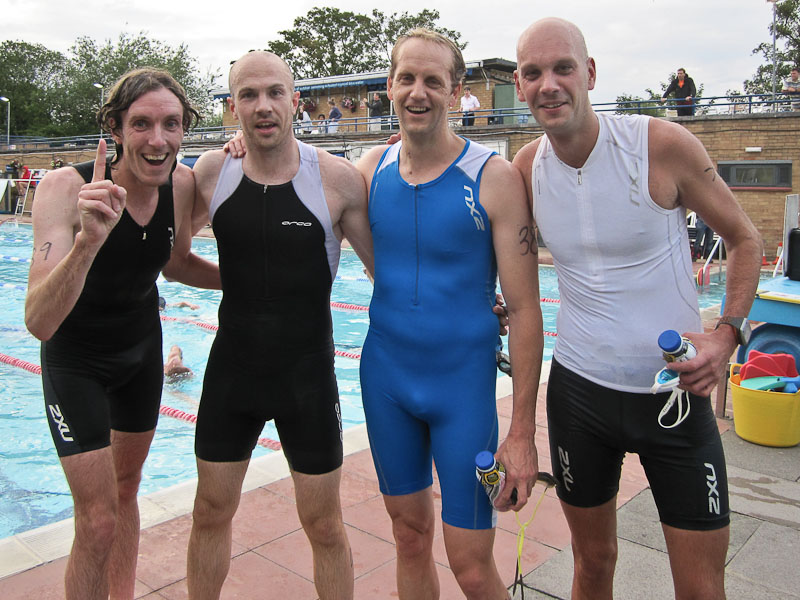