Friday morning and I had a good nights sleep - which is perfect as it’s very rare to get a good sleep the night before the race - especially when the alarm is going to wake us up at 3:30am!

We took the campervan straight down to the beach this morning. Sharon had her breakfast whilst I sorted out getting myself ready for a swim. Conditions were marginally better than on Thursday. It was still quite rough but the wind wasn’t blowing a gale! There were quite a few groups of swimmers on the course. 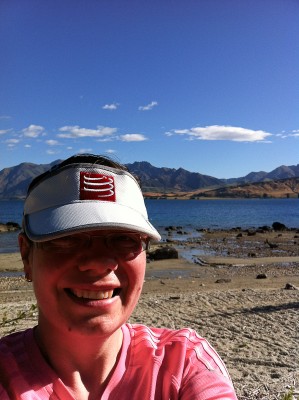 Sharon headed off for a long run - taking in the first five miles or so of the Challenge Wanaka run course that I’ll be doing tomorrow whilst I jumped back into the lake. The first few minutes were once again pretty horrible - I think its mostly just getting acclimatised to the cold water and the chop. On race morning I will try and get in the water for a bit of a splash around/warm-up prior to the 6:30am start. I met up with a couple of other swimmers - from Christchurch (the one in New Zealand that is!) and we had a good chat whilst swimming gently to the first main turn buoy.

After getting back from the swim it was off to the race briefing in the main marquee. When the Run Course Director came on to talk about the course she let us know that they currently had people out on the course picking up ‘road-kill’ and that they’ve been quite busy! One thing we’ve noticed from driving around the island is that there are a large number of squashed animals on the road. It’ll be nice not to have to swerve round them tomorrow!

Sharon finished her run (pleased to have managed her planned 10 miles) and we headed back ‘home’ for me to sort out my transition bags (the bag I pick up after the swim which contains my bike gear and the one when I transition from bike to run containing my shoes and GPS) and get everything ready for tomorrow. 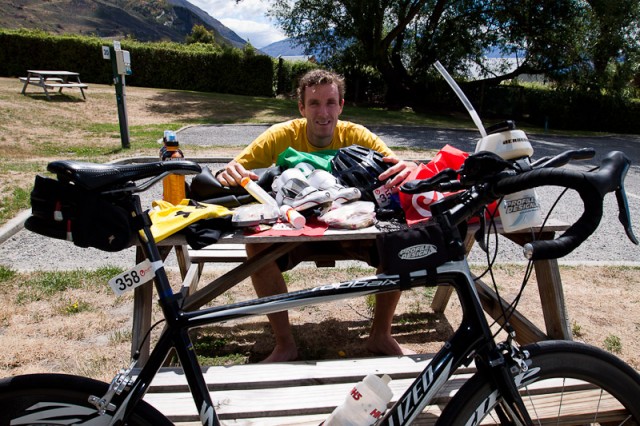 At around 5pm after a little snooze we headed back to the race site as I had to rack my bike and hand some bags in. One of the bags was the compulsory ‘Special Needs’ bag which will be available at about 90km into the bike course. This has to contain a long sleeve thermal top to wear on the bike if it gets cold (which can happen very quickly in an alpine environment - even with the forecast set to be in the low 20’s on race day.

It’s now gone 7pm. I’ve had a pile of pasta for dinner and am washing it down with some ‘lovely’ Gatorade sports drink! We’ll then have an early night before an even earlier start tomorrow.

If you’ve nothing better to do on a Friday evening then you should be able to follow my progress via this link. My race number is 358 and I’m doing the ‘Challenge Wanaka Individual’ event (there’s a half-ironman distance race taking place the same day). The race starts at 5:30pm UK time on Friday evening (6:30am Saturday morning in NZ). If that link doesn’t work here’s the main link to the results section of the site - http://www.challengewanaka.com/challenge-wanaka-live

The weather forecast for tomorrow is for hopefully a slightly less choppy sea, but increasing westerly winds during the day. The later they increase the better as I’d much rather them affect me on the run than during the bike leg.

Bike time is much more of an unknown. I’ve turned off the speedo display on my bike GPS as it makes no difference to me. I’m going to try and go purely by my power meter and try my best to not push too hard or too easy. Constant effort throughout is the plan. I hope to push about 230-235 watts during the bike leg. I’m not so sure how long it will take but lets just say something close to 6 hours is what I’m anticipating.

As for the run, a sub 4 hour marathon is what I should be capable of. A 3:45 would be nicer though.

So… ignoring transition times something around the 11 hour mark is my current estimate. In events of this length anything can happen on the day so I just have to play it by ear and hope for the best.

Stay tuned for a later update or feel free to keep an eye on Sharon’s twitter account as she hopes to post some updates during the day.