Sunday morning, race morning. It hasn’t been race morning on a Sunday very much for me in the last couple of years - but David thought we should enter this to get into the Triathlon Show “free” (included in the race entry) and get a technical tee shirt (not that I need any more running kit!)…oh and run a 10k.

We arrived early, milled about a bit and went for a warm-up, it was pretty chilly too. On said warm-up we ran around the Parade Ring and I was instructed by David that when I ran around it in the race, I should do my best “Showing Horse” prancing and parading. Ahem. Soon enough, we were outside and waiting in the blustery drizzle for the off. I decided to go for the “triathlete look” of a visor (without this I wouldn’t have been able to see with the rain) and arm-warmers (wearing only a vest it was colder than I would like). I was obviously at the back, with no real race plan as the course looked a little tricky. We whizzed down a hill, leapt over some puddles, ran up another hill, through the stables and past the horse showering area (really!), around the Parade Ring (where yes, I pranced as instructed, I know it was a race but it made me smile), along some bark chippings, then down again to the turn-around and unfortunately back up again By the time I had was heading up the horrible hill for the first time, the lead guys we flying down. Wow! They really do fly! I came through the finish area and off for a second lap - at least I hadn’t been lapped. I went through half way in 28:25. 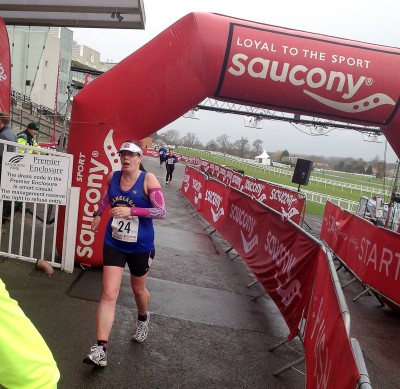 I thanked the marshals as much as I could - and the marshal at the stables told me she loved my arm-warmers - and went around again. I dug in as best as I could, determined not to let the lady ahead of me out of my sight, as she’d been a little bit ahead of me for the whole race. I got to the top of the hill which really truly was not very pleasant, went past her and pushed on for the final bit to the finish. She went past me again (and was the only person who overtook me through the race after the start had settled down) and we were there, over the line.

I had tried quite hard and recorded a watch time of 56:59, with a gun time of 57:14. Either way, I was quite pleased. I was most pleased with how hard I had tried and how I had managed to just about hang onto my pace for a second half of 28:34. Originally I thought I had done a negative split - but that was on gun time - so I haven’t. Ah well. Still not bad for me to only “lose” 9 seconds over a tough second lap of a 10k. 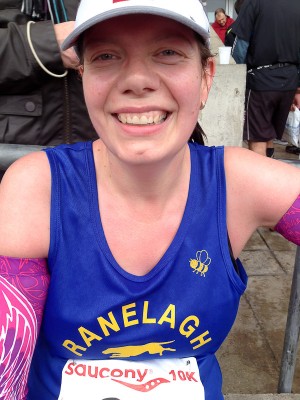