A few miles away from where we live is an annual triathlon exhibition/show. I’ve never been there before (well, I’ve got a bike and a wetsuit so what else do I need?) but this year I thought I might like to pop along. Rather than pay just to go to the Triathlon Show for £9 (that’s the advance ticket price) you could pay £15 and get to run a 10k race around Sandown Park race course (where the show is held), get a free technical running t-shirt and also entry to the show. For an extra six quid that sounded like a bargain to me. So I entered the 10k. And entered Sharon into the race as well :)

Race day arrived and Sharon and I arrived super early (as we pretty much always do at these races). We went for a good warm up jog where we checked out most of the two lap course. You run past the stables at the race course and then around the ‘parade ring.’ It was really quite an interesting course although there were plenty of 180 degree (or more) turns and lots of little steep climbs to really take you off of any sort of steady pace. Oh, and the general course was pretty hilly too. Clearly not a super fast 10k. 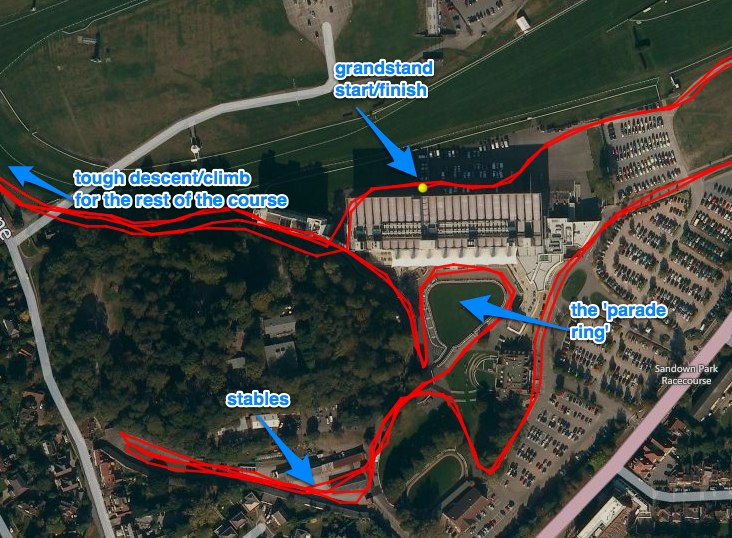 I went into the race having no idea of what I was capable of. I’d not intended to race hard as this wasn’t a key race but naturally as the gun went all those plans flew out of the window. In the back of my mind I would be perfectly happy with a sub 40 minute run but I should be capable of much better (well, on a flatter course that is).

After a quick race briefing I got myself close to the start line although kept clear of the fast boys at the front (including Bushy parkrun regulars Richard Stannard and Mike Trees).

The start immediately headed downhill and it was pretty fast and furious. There were twists, turns, people everywhere and some big puddles in the road/path. Oh, and it was windy and raining too! Looking at your GPS early on to get an idea of pace was pointless because of the initial steep downhill section. In fact I don’t think I checked my GPS at all during the run other than at the halfway point to see how I was doing.

Reaching halfway my watch said 18:43 which equates to a 37:26 overall time. On a hilly windy course and with my 10k personal best being 38:02 this was going to get interesting!

I found myself with a couple of other runners and we all pushed hard and kept each other really close by (close enough that I felt my feet get ‘clipped’ by one of the others on at least one occasion)!

The second lap was tough and I was really digging in to keep up with the other runners around me. Heading up towards the finish the two runners closeby made a slight gap on me and sprinted to the finish line. I was perfectly happy not to attempt a three way sprint and left them to it!

Crossing the line my time was 37 minutes 56 seconds - which means that yes, I slowed down in the second half but did mean that I got myself a new personal best over the 10k distance. Seven seconds… I’ll take that for now.

As for the race - I really enjoyed it. The course was tough, lots of turns and exposed to the elements in places. Well organised and an absolute bargain. I’d certainly do this race again in the future.

My next 10k race will be in May where hopefully I’ll have another bash at getting another personal best. In between then I have the small matter of the London Marathon to deal with…