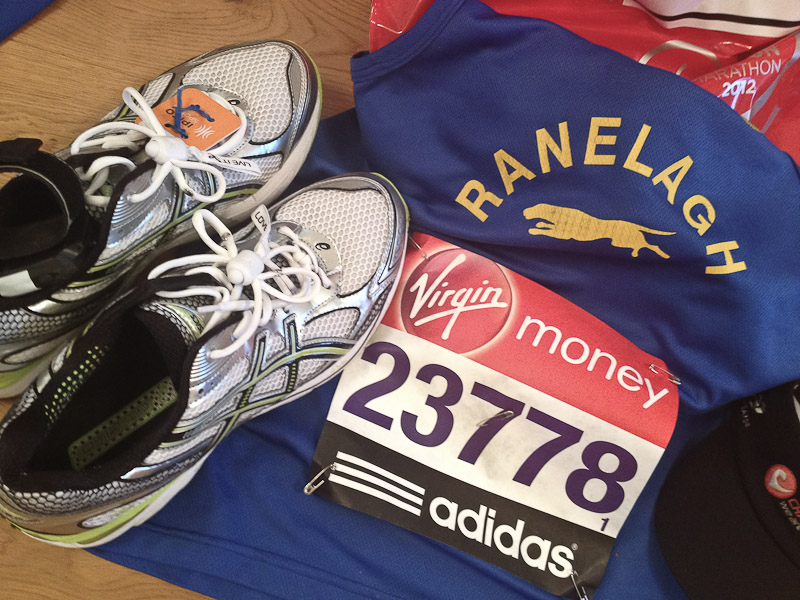 So, I’d got an entry to this years London Marathon through a ballot organised through my running club Ranelagh Harriersandwas really looking forward to running the race for the second time (my first time was in 2009). Coming into the race I had a single aim - to get a time under 3 hours and 10 minutes. This would get me a ‘Good For Age’ time meaning that I could enter the race for the next two years without having to enter the heavily oversubscribed ballot process or commit to raise thousands of pounds for a charity entry. That was my only aim. I tried to get the time at last years Brighton Marathon (but that all went wrong) so wasdetermined to have a good run this time.

Training over the past few weeks had gone really well and I stuck to my planned training schedule really well. The easy runs were easy, the hard runs hard and I was the best prepared I’ve ever been. In the last couple of weeks before the race you taper down your training with the result being that you feel as fresh as a daisy on race day. Well, for some strange reason which I cannot understand my quad muscles were aching towards the end of last week - this should not be the case! I just didn’t understand why. I put this to the back of my mind. Perhaps it was just a phiggle (a phantom niggle!!).

Sharon and I were up early at 5:40am, breakfast was consumed and then we headed to Twickenham station to meet up with Chris (from parkrun) for the 7:03 train. At Waterloo we met up with Danny, Nick and Ann and then made our way onto the super busy train (standing room only) to the start area at Blackheath.

The usual routine in the start area was followed - queue for toilet, go to toilet, go to back of queue and queue for toilet… and repeat. At about 25 past nine we were happy down to ‘race weight’ and Sharon and I took our bags (with warm post-race clothes) and dropped them off for transport to the finish. 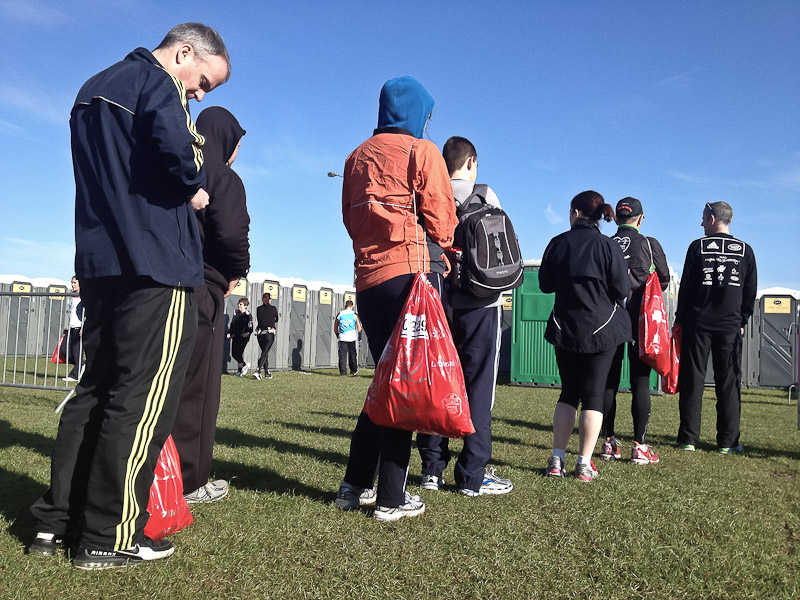 The toilet queues… before they got really busy!

Sharon then headed off to her starting area (the areas, or ‘pens’ are based on estimated finishing time) and I went to mine. I was back in pen 1 again which ensured a pretty swift start. After the starting gun went at 9:45am I crossed the line after about 50 seconds. The electronic chip timing that you have on your shoes means that whatever time you start you’ll get accurate timing.

The first couple of miles were busy and we all started off pretty slowly but before long I was on pace and pushing steady. The weather was fantastic - cool and sunny - and although there was a bit of a breeze with the number of people running and supporters at the roadsides there’s very little in the way of headwinds slowing you down. 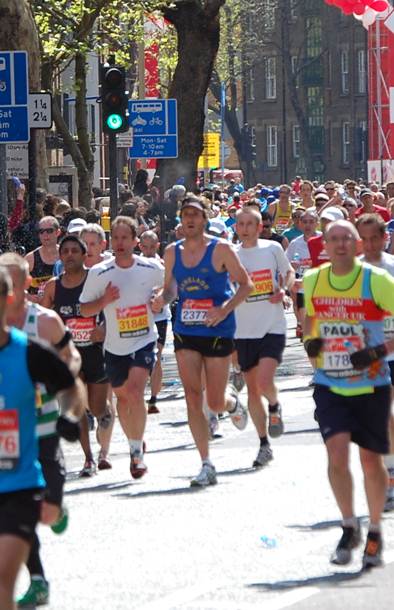 Just before the turn to Tower Bridge. That’s me in the blue in the middle. Photo: Andy Wingate

The early mile support on the course was fantastic. Music (loved running past the South London Jazz Orchestra), bands, people screaming and shouting. It was awesome. Cutty Sark was amazing and the wall of sound when you get to and cross Tower Bridge at just before the half way mark.

13.1 miles was ticked off in a time of 1:33:56. Doubling this time would give an even split finish time of 3:07:52. That’d be lovely! Just after this point I caught up with, said a quick hello and then edged past Mike Peace, a fellow club runner. Mike is an absolute legend. He’s run the London Marathon every year - and I mean every year since it started. This is his 32nd year running the race and he is one of the Ever Present runners - a club you can leave but no longer join. There are now 16 people remaining who have run every year since 1981.

Shortly after 14 miles you head down Narrow Street. This is the main spot where I took photos from last year. It was so so crowded. I was looking out for Kirsty (and family) and spotted her in her usual place. Great screaming/shouting and a little high-five. Love it.

You then head into Docklands. This is always a tough time and you have to concentrate hard to stay to your split times. I just about managed this. I knew I’d gained a few seconds in the first half so had some leeway if I dropped off of the pace at all during the final 10 miles or so. It was good to see fellow clubmate Marie. I said hello, she asked how I was doing and I said something like “I’ve been better.”

There was no such ‘wall’ to fight through today (well if there was it was in my legs really early in in the race). I hydrated well on sports drinks and water and had energy/carbohydrate gels approximately every five miles.

After 20 miles you’re back on the main road to the finish. There’s only 10k to run and looking at my watch I (just) had to run a 10k of around 45 minutes to get to the finish in under 3 hours 10! Surely that was possible.

Although my legs were hurting and felt like they were on fire that was the only problem. I wasn’t breathing at all heavily. I said to myself that I’ll push on as best I can close or better than target pace. Ignore the pain and run till my legs refuse to run any more. That’s all I can do. I wanted to get this time last year at Brighton but didn’t, and I could happily go through some pain to get the time that I wanted today. Toughen up.

Just before 21 miles I remember hearing a great tune (DJ Fresh, Gold Dust) pumping out from one of the super sound sound systems on the course. Upon further investigation with the help of Google Maps it was coming from Limehouse Town Hall! Nice work there whoever was in charge. This gave me a great boost.

When you’re feeling strong and positive then the final miles are awesome. You overtake so many people. You do have to weave a little around people and be aware that anyone at any point could suddenly stop and start walking (or clutching their legs with cramp!).

During the final miles I remember overtaking a chap from Thames Turbo Triathlon Club and a couple of members from another local club, The Stragglers. I obviously said “Go Turbos” and “Go Stragglers” at I went past in support - as you never know they may say the same if/when they come past you a few minutes later!

At about 25 miles I caught up with Sean from our club. He was’t having the best of days. He then stepped up the pace and I ran with him for about 30 seconds or so before he dropped back again (although he eventually beat me over electronic ‘chip’ time).

The main thing I did today which I’d not done previously was ignore the distance that my GPS was reporting. I checked mile splits based on the mile markers out on the course, and not what my watch was telling me. If I believed my watch then I’d be off of my pace (it measured the 26.2 mile course at 26.6 miles). This was the best thing I did before the race (other than train!). 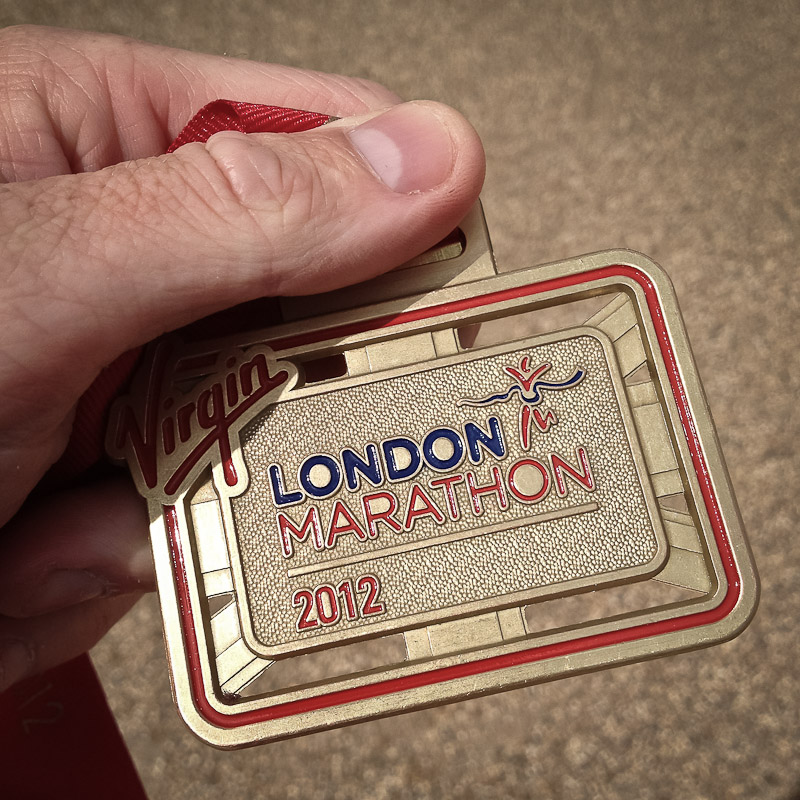 My finishing time was 3 hours 9 minutes and 9 seconds. Result. Job Done. This now means I can automatically enter the race for the next two years. My first half as I said earlier was 1:33:56. My second half was 1:35:13. Losing a minute and 17 seconds over the second half isn’t too bad I’d say. I just wish my legs didn’t hurt so much from so early on. I also now have a really nasty blister appear on one of my toes which is going to be a case of bye-bye-toenail very very soon!

After finishing I ate and drank pretty much everything I had with me and in my post race ‘goodie bag.’ I then went for a bit of a walk, tracked Sharon online and spent about an hour or so cheering runners along Birdcage Walk. I then waited for Sharon to come past and then I went and met her shortly after the finish. We then met up with Kirsty, Heather and Danny and caught the train home.

The support on the course was amazing and I found it really encouraging. I got plenty of shouts from clubmates and friends and the ones who I remember cheering me on were as follows -Andy P., Phil A., Andy/Emma/Suzan, Simon B./Simon, Kirsty/Orlando/Mike/Liz, Deb & Simon, Jess/JJ/Anna, Ali Y., Phil K, Marc & Julia, John L., Chris O.,Nigel R., Clare K. Thanks to all of you and sorry to anyone I missed. I know there were a few others but I cannot remember their names - sorry!

What’s the plan now… well, another Ironman distance triathlon in a few weeks time (time to get back on the bike again) and then perhaps a quieter autumn…