This is the annual summer handicap cross country race for Ranelagh Harriers and one I always try and attend. It’s a great challenging course on a beautiful summers evening. As the sun is going down there are families and dog walkers strolling around the park and you, together with around 70 other runners race down the paths and trails of Richmond Park for just under five miles. It truly is lovely.

Unless it’s 2012 and its been pi**ing with rain most of the day and the course is mostly muddy and waterlogged grass.

This was my second run after the Outlaw Triathlon nine days ago. My first run was at Bushy parkrun on Saturday where my legs were just tired, completely tired. I pushed hard and managed a respectable 18:43 but was so shattered that was it for my training that weekend. Monday/Tuesday this week I was working in London so plenty of steady miles on my heavy old mountain bike got the legs moving again.

I was looking forward to a good tough run this evening and that I believe I delivered on. I really didn’t expect there to be so much water on the course having not run on the trails of Richmond Park for a good few weeks - it was much worse than in the middle of winter. 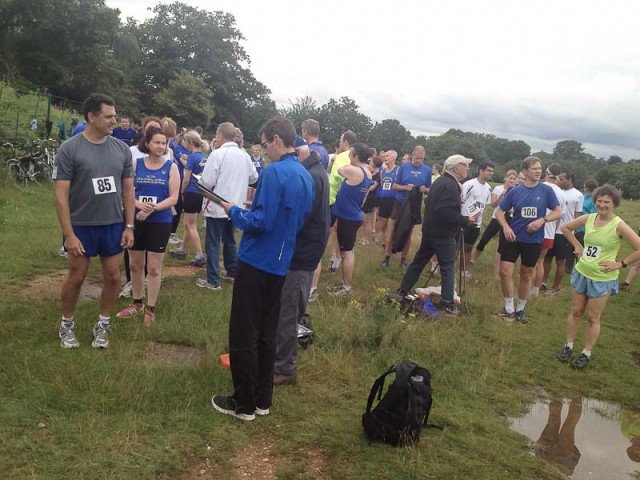 Getting ready for the start. Chap in the grey top is off next, followed by the lady.

As it’s a handicap race we all start at different times and its great fun watching who goes off in front of you (slower runners) and those behind you (hopefully faster runners). We all stand around joking that the ‘handicapper’ (he who sets the starting order based on previous performances) has screwed up yet again and given us inaccurate starting times. However, these are the cards that are dealt and we have no say in the matter. If you’re a consistent athlete it’s very difficult to ‘beat’ the handicapper and win one of these races so you just need to look at it as a solid race where you’ll hopefully be catching up some of the slower runners towards the end. You also need to try and look out for and stay ahead of the faster runners who set off after you. It’s like running with a large target on your back!

Did I mention that the course was wet and muddy. Well, it was. 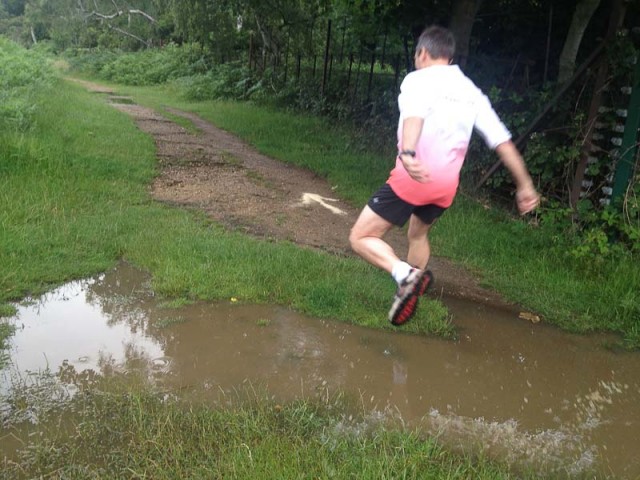 I set off fairly hard and took advantage of the run down Queens Ride to clock an opening mile of around 5:45. Last year I ran the first mile in 5:53. This is where the comparisons to last year end! It was tough, real tough.

Heading around Spankers Hill Wood I was overtaken by Andy B. who muttered the words of encouragement “Come on Beardy!” Well, as we were about to run into a headwind I had the option of fighting the headwind on my own or using the same effort and sitting right behind Andy and let him do the work, and at the same time run a little quicker. Easy decision.

I stuck with Andy only for a couple of minutes during what was the most exposed part of the course. At 5k my time was around 19:13 which seemed reasonable - especially with a couple more miles to run. I really pushed myself during this race and it was great to overtake quite a few people in the last couple of miles.

As I crossed the line my time was 31:34. Last year I ran the course in 31:04 which was my best time. The weather in 2011 was better with no puddles and mud and I hadn’t just raced an Ironman nine days before so I’ll take that as a great run.

In the overall results I was the sixth fastest on the night out of 76 runners, which was a great turnout on a far from summery evening.