Lets face it, the 2012 Olympics have been awesome. With over 2,500 hours of competition broadcast by the BBC our digital TV set top box is full to the brim with recordings (but not quite 2,500 hours worth!) from the past two weeks. This will keep us busy for the next few months and I look forward to it helping with what I feel will be a bad case of post-Olympic-syndrome.

Saturday morning (11 August) at Bushy parkrun as I stood on the start line I saw a real life Olympian toeing the line. I had hoped that we might have had a ‘speedy boy or two’ at Bushy after seeing an earlier message on twitter. Well, what a treat we had in store for us.

Stood on the start line (kitted out head to toe in New Balance sportswear) was Andy Baddeley. He’s a local chap who’s competed in the Beijing Olympics, and multiple other world championship athletics events. He’s had a busy few days as he took part in the 1500m event in the London 2012 Olympics where he ran 3:40:34 in the first round and then 3:36:03 in the semi-finals - but unfortunately not progressing to the finals.

However, with all that pent-up speed in his legs surely the best way to get it out of the system is a little run around Bushy Park, and when better to do than at 9am on a Saturday morning.

During the pre-run announcements Andy was introduced to the ~900 runners to which there was an amazing round of applause, that just went on and on and on. It was something I’d not seen in my 230+ parkruns to date.

As the start signal was made I watched in awe as he just opened up a gap between himself and everyone else and just kept running further and further away from us. I had a good strong run, although my legs were feeling tired from a long run the day before but found myself with a few other runners of similar speed and worked hard till the end. I finished in 17:58 and was happy with that. I just need to be able to go ‘comfortably’ sub-18 minutes. Today it was not comfortable! My run was certainly more comfortable that others, as I saw one chap (who was much faster than me) being sick after finishing.

As soon as I finished I wanted to see how Andy did and word was spreading round that he finished in 13:48, which is 12 seconds faster than the previous Bushy parkrun (and overall parkrun) record.

The first time I attended a parkrun (well, Bushy Park Time Trial as it was known at the time) was on 10 June 2006. That morning I watched Craig Mottram run 14 minutes exactly and get a new parkrun record. That record has stood until today. I was even there in October 2011 when Justina Heslop got the all time female record of 15:58. Some of these amazing performances must surely be rubbing off on me.

In 2006 I ran exactly seven minutes slower than Craig Mottram. This time I managed to run four minutes and ten seconds slower than Andy. If I keep this progression up I should be battling for the fastest time in about 12 years!

After his run Andy headed off to continue his run and came back to the finish area shortly before 10am. Quite a few of us were still around chatting in the sun and it was lovely to talk briefly with him and of course pose for a photo or two. 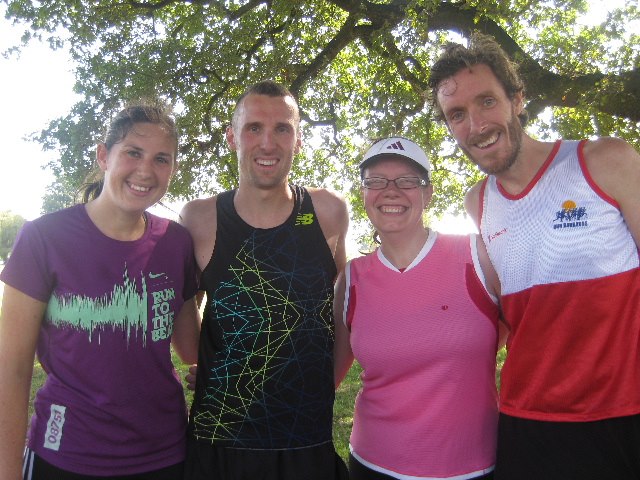 What a legend, what a morning, and from the round of applause he got before he even broke the parkrun course record I’m sure he’s inspired a number of people this morning to keep running.