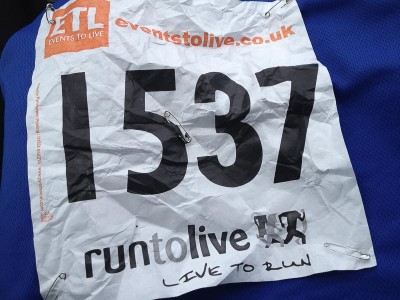 I don’t really enter many races. I guess I’m a bit of a loner when it comes to most of my training. Maybe I’ll blog about this at some point but not right now. Anyway, enough about that - back to the subject…

Sharon and Kirsty had plans to enter this event (Sharon doing the ‘Tempest 10’ event - which is a single lap - with the Spitfire 20 being two laps). I entered as well and if it was anything near half as well organised as the Three Molehills race by the same Events To Live organisers then it would certainly be a good morning out.

Porridge and coffee for breakfast and an early (not triathlon early, just running race early) start to get to the race site in Dunsfold (where they film the TV show Top Gear). Sharon had a couple of miles warm-up to do (her plan said 12 miles, so a two mile warm up and a ten mile run would suffice). My plan. Well, I don’t have a plan. I just thought it would be nice! I did 16 miles a few weeks ago so surely 20 would be fine. I had no plans to race this or run particularly hard. I just wanted to get round at a steady pace and not injure myself. My right calf has been tight the last couple of weeks and I’ve eased off the running and done more cycling. Time to give it a proper test. 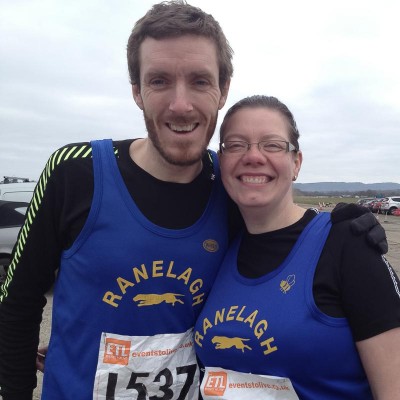 The first 10 miles were lovely. The course was lovely. I know airfields are big but you have to run about 2.5 miles to get out of the bloody aerodrome. It was very exposed but thankfully not too windy. Once we got into the country lanes there was lots of chatting amongst other runners and I found myself ducking in and out of a few conversations and saying hello to people (who I didn’t know) from other running clubs. The time flew by.

The course was lovely and quiet. The marshalls were absolutely amazing. Drink stations were perfect (one of the lads had no trouble with me swapping a lime flavoured energy gel that I’d picked up at an earlier station for a strawberry/banana flavoured one). Now that’s customer service for you! No quibbles (ok, so I was probably over 25 years older than him so perhaps he was just respecting the old folk!).

Back to the marshalls. The route means we had to cross a couple of road junctions. When you get out into the countryside it often seems that the 4 wheel drive brigade hate runners and when there’s marshalls stopping traffic out whilst ‘us’ are running along ‘their’ roads they can get a little angry. Well, every time I crossed a road the marshalls were doing a superb job and I didn’t notice any angry motorists. I hope it was like that for the rest of the runners as it was lovely where I was.

At the end of the first lap you have the tough part when you run through the start/finish area and back for another two and a half miles of exposed surroundings - with a stiffening cold wind and a sweaty running top on this made it a bit chilly. Well… you just have to run a little faster to keep warm! I was asked by a chap who I’d be running alongside for a while if I was comfortable. My heart rate was steady and just on the overlap of my ‘recovery/aerobic’ ranges. I felt fine from a heart rate point of view - it was just my legs strength that would be the limiter going forward. I was still experiencing a few aches from a longish bike ride in the Surrey Hills on my day off two days previously.

At about 14 miles I decided with around 10km left to run I’d increase the pace a bit and started to put in a few faster miles. I slowly edged past people and was really enjoying it. It certainly wasn’t easy but I wasn’t pushing myself overly hard. It was just more of a solid pace. Before long… well, about an hour later we turn back into the aerodrome for the final straight. 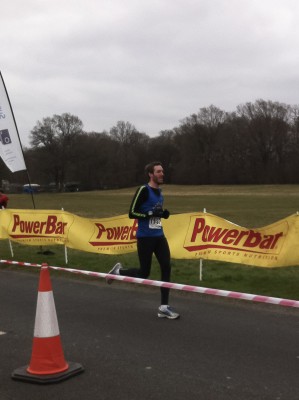 There was a pretty large gap behind me and I was taking it at the same pace as previously. As I approached the finishing funnel area I noticed three chaps closing in on me from behind and one giving it a good go. I remember saying to the people supporting something like “really, do I have to sprint and race now after all nearly 20 miles” and then I decided to give a good kick and sprint for the line. I didn’t need to do this - the position or time doesn’t really bother me. I just wanted a good solid run. Oh, I didn’t let the chap pass me :)

My finish time was 2 hours 34 minutes and 3 seconds. Averaging 7:40 miling. Faster than I had originally planned but not overly quick for my liking. That’ll do. I’ve got a 21 mile event/race in a few of weeks time which I will try and run slower at. I want to get more ‘time on feet’ rather than a fast time. Right now for me its all about Ironman training rather than specific marathon speed-work.

Lunch consisted of a couple of bacon rolls at the race HQ and then the drive home. A really good race organised by really nice people. Highly recommended.