So, the reference to ‘mark ii’ means there must be a ‘mark i’ - this could either be David’s report from 2011 or my London Marathon from 2012. You decide…

I feel like I need to write down a few thoughts after the Brighton marathon. It’s pretty tough to remember it even now, to be honest. I didn’t blog this year about my training as I think last year when I did it just added to the pressure I felt when doing London. 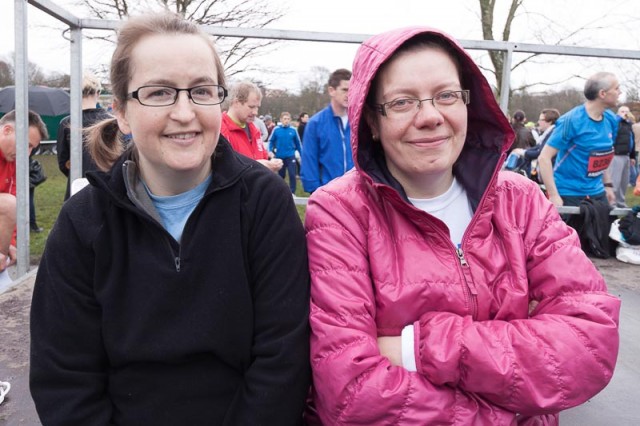 Anyway, after London didn’t go to plan last year, I entered Brighton the week afterwards. I’d said after London I wasn’t doing another marathon. Hmmm. Anyway, training started in December (using Hal Higdon again) and straight away it was much better than the training in 2011-12. I was consistent, I didn’t get injured, I managed to do nearly all my runs on the schedule, including the “sorta-long-midweek-runs” as HH calls them. A lot of these midweek runs I did with David after work, it made me get out there but not sure running at my pace was good for him, however he said he liked it! This year I did most of my long weekend runs on my own, you’re going to be on your own running on marathon day, so that’s what I did. I generally ran with one headphone in, listening to the Marathon Talk podcast, or IMTalk podcast, laughing quite a bit as I ran along. 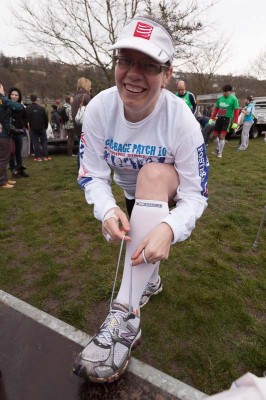 Oooh, I’m remembering something! I said I got no injuries, I did though. I fell over during a 15 miles run about 9 weeks ago - did my right hand some serious damage, I am still in a splint and its not healing well. Luckily the lady at the Hand Injuries Unit made me a splint which was good to run in.

I didn’t really race, I only did two in fact. The other organised run was “Not the London Marathon” which is an annual thing we do through bushy parkrun, essentially as many loops of the bushy course backwards and forwards as you want to do. I ran one lap with Helen, two laps on my own, a lap with Kirsty and the last lap and two thirds (to take me to 18 miles) with Emma. I felt much better than when we did the same event last year, no toys out of the pram this time.

My first proper race was the Tempest 10 - which I did with a 2 mile warm up as I only had 12 miles on the schedule that weekend - and David did the Spitfire 20 at the same time. The race is organised by our friends Alan & Nicky at events to live, it was super. I did the 10 mile hilly course with an average of 40 seconds a mile faster than my planned marathon pace. The medal was lush too, I do love a bit of bling! The only other real race I did was the Cranleigh 21. This is an excellent, cheap, club runners race with an 11 min per mile cut off, if you haven’t reached the 15 mile point in 2 hours 45, before the final 6 mile loop, you can’t continue. Anyway, I was so nervous about this race after last year when it was a shocker for me. It turns out that I had remembered it worse than it was - although it was 20 degrees in 2012 and about zero and snowing this year! I prefer the cold, so maybe that’s why. I finished 8 minutes faster than last year, although had to argue with 2 marshals during the race to be allowed to continue as they didn’t realise it had started late. Never mind, the rush of adrenaline sped me right up for mile 16! I managed the 21 and a bit miles in just under 3:50, all looking good for Brighton, which is also a bit hilly.

I got quite poorly the day after Cranleigh. I had a cold, cough, sore throat that I just couldn’t shake and it was worrying me that I wouldn’t even be on the start line at Brighton. Anyway, it cleared away on Thursday, thank goodness. Kirsty and I went to Brighton on Friday to get our race numbers, Saturday was spent lollaxing and before I knew it, it was race morning. 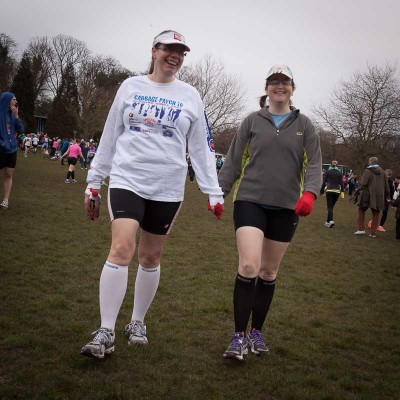 I’m not going to go into details of the race in terms of splits etc., there is no point and to be honest it’s too painful to think about. We had our usual race morning, before I knew it David had gone leaving Kirsty and me there, to go into our corrals. Soon enough we were off. My first few miles were perfectly on pace. I saw David at about 3 miles, heard him say, “keep strong” and carried on. He saw me in the town but I didn’t hear him :( Going along, up some more hills, must have been about 8 miles when my head started messing with me. I wanted to stop. Ridiculous. I got to just about 11 miles I think and asked a marshal if I could use his phone. I rang David and left him a voicemail saying I was going to come and find him and DNF, I just couldn’t do it. The marshal tried to persuade me to carry on, he was lovely. I told him I was going to find my husband and stopping, it just wasn’t happening and there was no point. I thanked him, off I went.

Through half way, thinking it wouldn’t be long until I saw David, as he was going to be at 14 miles, then I could just stop. It would be over. Before then I saw Liz & Mike (Kirsty’s mum and dad), I gave them a kiss, told them I was DNF’ing, Liz asked me (I think) if I was sure, I said yes I was. Bimbled off again. Got to 14 miles,couldn’t see David. Panic. Asked another marshal if I could borrow her phone, this time I spoke to him. He told me my chip wasn’t registering over the mats (covered with my fuel belt we suspected), so to move it. He told me not to give up, please just carry on to 18 miles when he would see me, that I had to get my medal. I can’t remember what else he said but it worked, I carried on. Still eating my gels, drinking lots of water - it was absolutely boiling and when you’ve trained through a freezing winter and its race day on the hottest day of the year so far, its a bit of a shock. I was desperate to see him, walking lots but managing to run some too. Finally I saw him! A kiss, a chat (as my time goal was long gone, the chat and kiss were more important), saw the marshal who lent me her phone to call him, David thanked her, he sent me on my way. Plod, plod, plod. 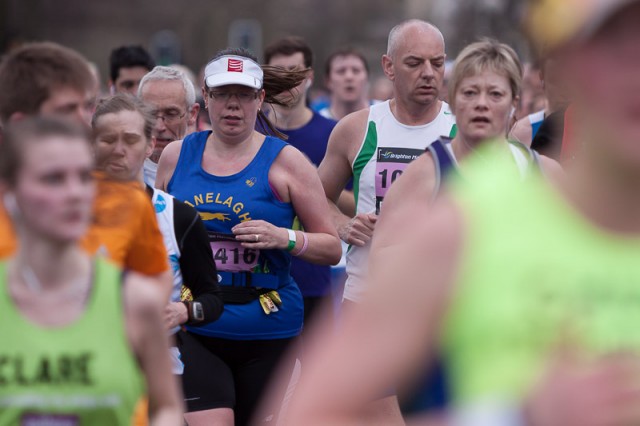 There’s a weird bit of the course where you do a big loop along by a fish market, with lots of speed bumps. It was eerily quiet through there. Really odd. People were not in a good way, sitting down, crying. Horrible it was. I just kept chugging along, either walking with my head up or doing the slowest run pace I think I’ve ever done! Finally we were up on the Prom. Only a parkrun to go. Scorching hot, knew I was getting some serious sunburn, just wanted to get that medal. Plod, plod, plod. 800m to go. 2 laps of the track. Felt an age until the 400m to go sign. Then the finishing gantry was there. I actually smiled when I saw it - and heard the announcer call out my club name, so gave a wave. Crossed the line, got my medal from marshal, “we’ll done, babe” he said. Why do I remember that? Saw Trevor who was helping and gave him a cuddle and had a little weep, another cuddle for his wife Gill who gave me my tee shirt. Saw Heather from our club, who cuddled me, i told her i wasn’t doing another marathon. Now I needed to see David, I just wanted to get to our meeting point but he had come to me :) I was overjoyed to see him. More tears.

Anyway, a bit of milling about and we found Kirsty, Liz and Mike. Eventually after a mile and a half walk we got to the pub to see some Pirate pals (crazy Ironman athletes who have become really great friends over the years), had a lemonade and lime and then after a bit set off on the mile and a half walk to the car. David walked over 12 miles yesterday - he was meant to be having a rest day! In the car on the way home I texted the kindly marshal who lent me his phone and was so encouraging, to tell him I had carried on and finished. He replied and said thank you for letting him know and that that had made his day worthwhile. 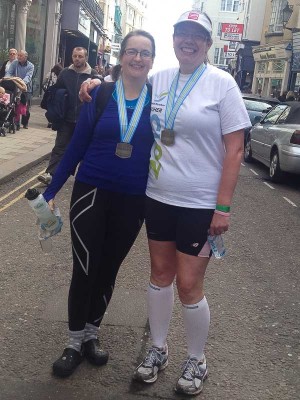 I’d already said I wasn’t going to do another marathon, I really mean it. I loved the training again, but something in my head won’t let me run one to my potential. My body is willing, my head isn’t. I thought my head would have been beaten by the great training I did, but it wasn’t. I am not prepared to put myself through this again, it’s hard. Really hard. However, I am very proud of how I trained, I really stuck to my schedule. I am also proud of carrying on yesterday (with quite a lot of persuasion from the wonderful man in my life!) - I’ve never had to battle my head for 18 miles to carry on. Oddly though, even though I was physically ok yesterday, I just couldn’t get going properly, so much walking. I am sat here now, totally gutted but knowing that if I had DNF’d it would have been much much worse. It’s only running after all. It’s funny, if I hadn’t stopped twice to call David and once to talk to him I may have snuck under the 5:30, but then to be honest if I hadn’t I’d have DNF’d. I have no chip time (5:34 if anyone cares, I actually sort of don’t!) because my chip didn’t register until 30k, so only a gun time will show. I only care about my medal and its lovely stripey deck chair style ribbon. I am contemplating getting it engraved with the first words I said to David when I saw him at 18 miles, “I fecking hate marathons” just in case I ever think about doing another :)

So, thank you most of all to my lovely David, he’s amazing. He has kept me calm through training, put up with me rambling on and over-analysing. Words cannot express how I feel about him and how thankful I am to him for yesterday, persuading me to carry on - he knew a DNF would have been so bad for me. I love you so very much. Also a huge thank you to my Twitterati girls and Kirsty who have been great through the training and indeed yesterday and thank you to everyone for their love, good wishes and comments on Twitter and Facebook. It means a lot, it really does. So that’s it, stick a fork in me, I’m done…literally! You should see the sunburn…