So, four days after the London Marathon and Sharon and I found ourselves at Club La Santa in Lanzarote. The aim of this visit is to spend a week getting in some good training in conditions that will hopefully be similar to what could be expected at Ironman Lanzarote in a few weeks time. This will probably be my final big week of training before easing down a little to taper into the race.

It just so happened that two days after we got here there was a triathlon taking place. This Olympic distance race (1500m swim, 40k bike, 10k run) has been running on the island for 29 years and is a very popular race, with lots of visiting athletes to the island taking part. It also sees a few professional triathletes racing as well. I’d known about the race when we first booked to come to Lanzarote (about 10 months ago) but only decided to enter the race a couple of weeks ago. I thought it would be a good chance to practice a salt water swim, together with racing on my new bike. A good solid workout and a ‘free’ t-shirt to all entrants. Perfect.

The race start was at a civilised 10am and I went down to rack my bike shortly after 9am. There were quite a few Brits around and a couple of people said to me ‘oh, you bloody pirates get everywhere!’ 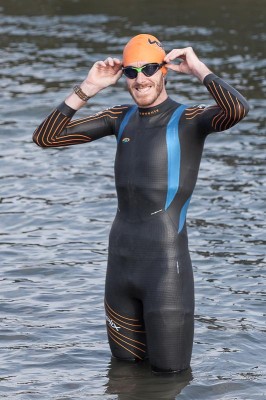 Sharon and I then headed down to the lagoon (where the swim takes place) and I got zipped into my wetsuit and ready for my least favourite part of triathlon - the swim! The swim starts at one end of the lagoon and the 335 (approx) people then swim about 400m or so to the first turn mark. If you start on the left side then you get pushed towards a sandbar where you are pretty much forced to stand up and run along for about 75m or so. I wanted to steer clear of this and wanted to swim the entire course so I started on the right. It didn’t seem so busy.

Well. The starting horn went. I was pretty much on the front row and there weren’t many people behind me as the majority of people were over the other end of the start line. I expected a bit of ‘biff’ early on but oh my - this was about 400m worth of arms and legs everywhere. I really don’t like this. You’re swimming along, all you can see are bubbles in the water from the people in front. There’s literally no room to your left or right hand sides as there are swimmers literally cm’s to your side. You clip hands, you’re getting your feet bashed by the hands of the people behind, and you’re trying to stay calm. Well, I didn’t manage it very well! 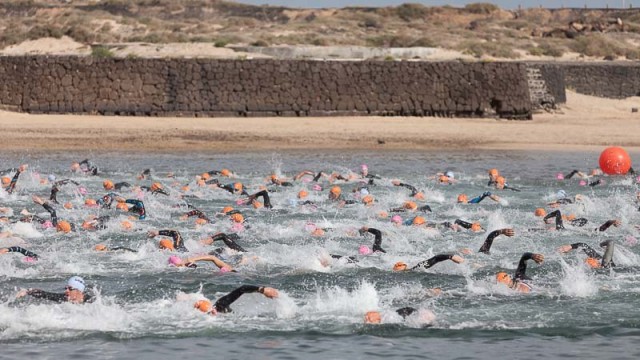 The swim start. Loads of fun to be had! 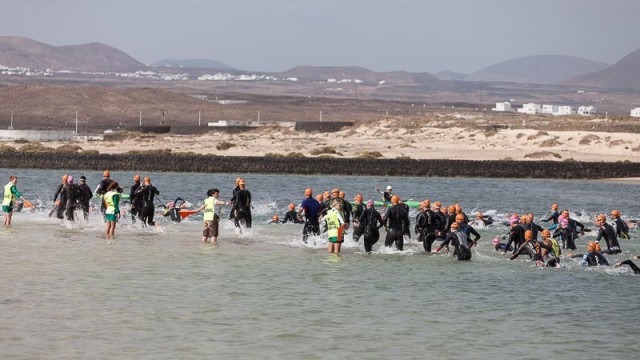 ‘Swimmers’ running across the sandbar

Once we rounded the first turn buoy I was able to find myself a bit more room and some feet to draft off of. I was then able to settle into the swim a little better.

The best bit of the swim was the end of it. As I didn’t have to swim any more! I came out of the water in 26 minutes 10 seconds. This was ok, but no faster than I can swim in a 25m pool (and I had a wetsuit on)! I guess the early panic didn’t help matters and you never know how accurate these swims are anyway. I seem to only have one real pace for swims like this and if the course was indeed accurate this would equate to a 1:06 ironman swim time (3.8k).

I was 107th person out of the swim (out of 313 full event finishers - not including the relay teams that were taking part).

Anyway, out of the swim you have a couple of hundred metres or so to get to transition 1 and it was off with the wetsuit, grab the bike and get going. It wasn’t the quickest of transitions (partly because I put socks on for the bike at this point and also my bike shoes - rather than have the shoes clipped into the bike ready to go) so that’s ok. Somehow I gained three places in transition 1.

The plan for the bike was to go just under my 1-hour time trial pace (or FTP for those who understand power). I wanted to average around 300 watts (92% FTP) and stick to that power as best as possible. It’s a lovely bike route, you go uphill to Soo (and it’s speed-bumps) and then down to Famara, then across and up to the turnaround (which is a huge roundabout) about a km or so from Teguise. Then you ride back. The bike was windy (well, it always is here in Lanzarote) and being able to stay aero and compact gives you your best chance of not being blown around too much in the head/cross-winds. The course has 1424 feet of climbing in total (so says my Garmin) over the 25 or so miles - so far from flat! 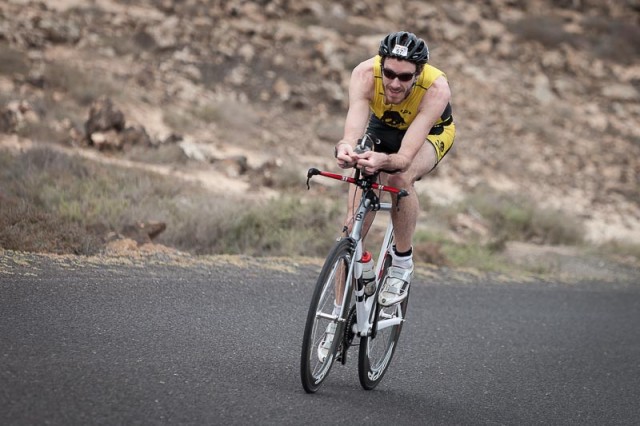 During the bike leg I just got my head down and pushed hard, and kept pushing. I was picking people off left right and centre. A couple of people overtook me but that was about it. I overtook tens of people - literally. The race back to La Santa was fast and the winds coming back down from Soo to transition 2 were unbelievable. It was absolutely howling and at times bloody scary!

Only one woman - the eventual female winner - had a faster bike split than mine. If only I was a girl! My bike split was quicker than pro racers Eimear Mullan, Bella Bayliss and Michelle Vesterby. Of course comparing myself to girls is not a good thing to do, but it make me feel better than I am. On that note you can now call me Davina!

I got back to transition 2, bike racked, run shoes and cool new pirate yellow visor on and I was off, for three laps that make up 10k. My watch didn’t seem to be behaving and although it was showing time and heart rate it had no pacing information (which I later realised was because GPS was turned off). Therefore I had to pace my run based on feel. I felt knackered and hadn’t run more than 2 miles since the London Marathon six days ago. Oh well…. 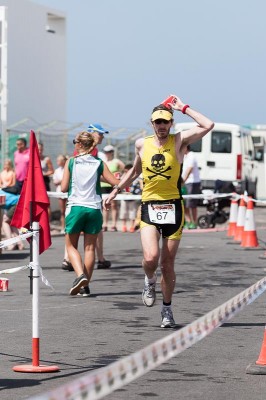 The run was hot, a little up and down and oh those lovely Lanzarote headwinds! There was some excellent crowd support at La Santa as you had to run a lap of the running track on each of the three ‘laps’ of the run course. A really great atmosphere.

Running without a GPS for company so no idea of pacing didn’t end up being the disaster that it could have been. My run time was 42:24 which for a windy (unbelievably windy in places) 10k after a hard bike was good for me. The run course was three laps and from the timing mat splits my minute-miling pace for on each loop was 6:33, 6:51 and then 7:06. So yes, I slowed down but I didn’t fall apart. I started the run in 37th position (after losing a position in transition 2) and finished in the same position (having had the 56th overall quickest run split). 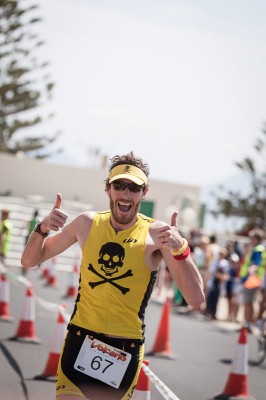 2 hours 22 minutes and 30 seconds after starting that lovely swim I crossed the finish line where I was met by the main man when it comes to all things in triathlon in Lanzarote - Kenneth Gasque. A truly lovely friendly man (who personally told me in front of everyone else in the race briefing on Friday night to only have the one beer and no more!). I then got presented with my medal (which is really nice) and then had a post race banana and a cup of coke. Lovely.

During the run I thought I had a blister on my right foot (I put it down to being pretty warm) but post race I noticed (from the blood all over my sock) that I’d cut my big toe before/during the swim and that had been the cause of the pain! 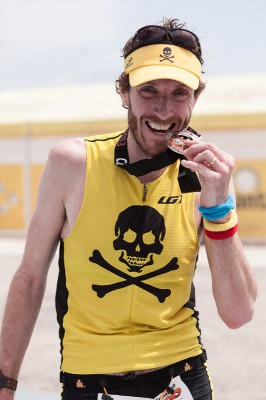 The Volcano Triathlon was a well organised race and for 50 euros I thought brilliant value for money. For that you get entry into a (as close as can be to) closed roads olympic distance triathlon with chip timing, a technical t-shirt, medal, a great goodie bag filled with energy gels and powders and a pre-race buffet at the pasta party. An absolute bargain. Apart from the swim being rather ‘serious’ (to be expected when there’s some money up for grabs at the pointy end and where there’s quite a few pro racers taking part) it was a friendly race and the marshals and volunteers on the course were great.