Ranelagh Harriers Richmond Half Marathon - 5 May 2013

By David on 6 May 2013 david ranelagh harriers

So, a few days ago I was reminded by Sharon that I had entered the Richmond Half Marathon this weekend! I’d completely forgotten. When I entered I thought it would be a nice way to get a longish run in just as I start to ease back the training in advance of my main spring race, an Ironman. Two weeks after the London Marathon would be fine (as I hadn’t planned to run London hard, which I didn’t).

The day before at Bushy parkrun I nipped under 19 minutes on very tired legs (from a previous week of fairly large cycling volume) so an easy Saturday would surely give a bit of recovery in advance of a bit of a smackdown at this half marathon. I had toyed with the idea of a steady paced training run but with it being a fast course and myself being fairly fit I thought it was worth a go at pushing for a good time.

My previous best time over the distance is 1:27:42 from the Bedford Half Marathon in 2007. That’s a hilly course. Surely I could do better. I had a good bash at beating that time at Tunbridge Wells in 2008 but it didn’t work out on the day. I’ve not ran a half marathon race hard since then.

I had a think and thought a time around 1:25 would be a great result. The only ‘speed training’ that I’ve done all year has been weekly parkrun 5k’s. How would this work out for just over 21km’s. Surely four 20 minute 5k’s and a bit at the end. Sounds simple eh.

Sunday morning. The weather was perfect. Plenty of friends and fellow club runners were taking part (or marshaling) so there wouldn’t be a lack of support on the course. After a short warm-up I got myself in position right by the front of the start area. This is partly because the race is ‘gun’ timed (meaning everyone gets a time based on the start, not when they personally crossed the start line - so getting near the front was necessary and also helps avoid too much early congestion). 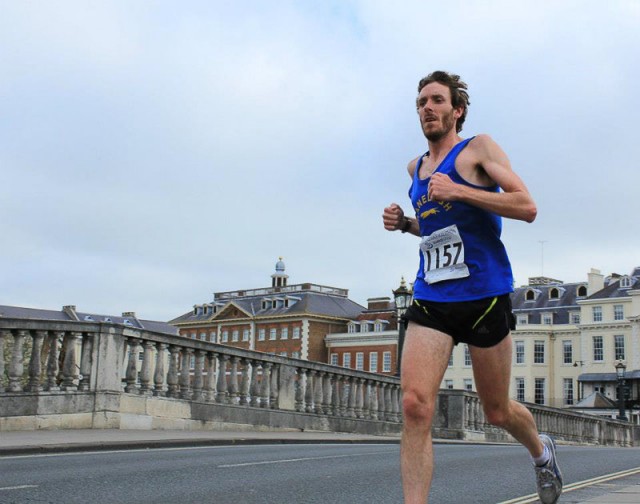 Richmond Bridge, one mile into the race. Photo: Rodney McCulloch

And then we were off. The early miles were solid and relatively comfortable. I saw my good friend Stefan race off fast (as he does every week at parkrun) and I awaited the ‘catch.’ Over 5k it’s normally at about 2.5k, but what would it be over 21k. Well… it turned out to be pretty much bang on 10k. I only know this as when I caught up with him he lifted his arms in the air and proclaimed to me (and the other runners near by) something along the lines of “I have done a sub-40 minute 10k for the first time ever!” That made me laugh.

Heading from Hampton Court along the towpath at about 6.5 miles I found myself with a group of maybe five people. Before long two of them had drifted off of the back and it was myself, a Collingwood AC and a Tadworth AC runner in a small group. We kept each other going and ran pretty well together. No-one wanted to drop off of the group so we all ran hard and stuck together. The pacing was steady, the effort was hard. 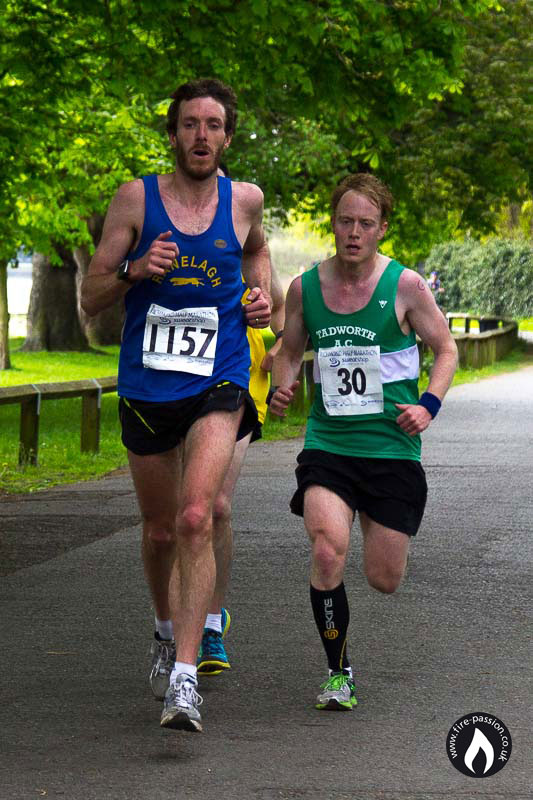 Around 9.5 miles into the race. Note the Collingwood AC runner (in yellow) tucked in nicely behind me. Photo: Katrin Kroschinski, http://www.fire-passion.co.uk/

Just before 10 miles I took a gel. I’d had nothing else during the run (apart from a gel 20 minutes before the start) and no water. In fact I didn’t use the water stations once during the race. I didn’t feel particularly thirsty (I was well hydrated beforehand) and just wanted to concentrate on running!

At about 10.5 miles I ran past Jo and Paul Sinton-Hewitt who were marshaling in Canbury Gardens and Paul said ‘take it easy David’ or something very similar! Cheeky git!

At this point it was just the Collingwood runner and myself. We worked well together. We sped up from averaging around 6:25 minute miling to around 6:15 miling. From miles 12 to 13 alongside Riverside Drive we caught up with Sean from Ranelagh who was struggling. I told him to jump on the back of us and he tried his best to. Shortly after he dropped back and I couldn’t hang on any more. Miles 12-13 was (according to my GPS) run at 6:04 minute miling pace.

I had no idea of the time at this point (I’d stopped doing the maths in my head a few miles back) and it was just a case of having to dig deep all the way to the finish.

There’s a slight double-back just before the finish and I remember a encouraging shout from Grant, who’d already finished. Cheers. I turned into the finishing straight (the only bit of grass you run on) and crossed the line in 1 hour 23 minutes and 46 seconds. A personal best of 3 minutes 55 seconds. I’ll take that.

Not long after I finished I cheered Stefan in who’d done brilliantly to hang on and get a 1:27:10 for his first ever half marathon. Brilliant work. 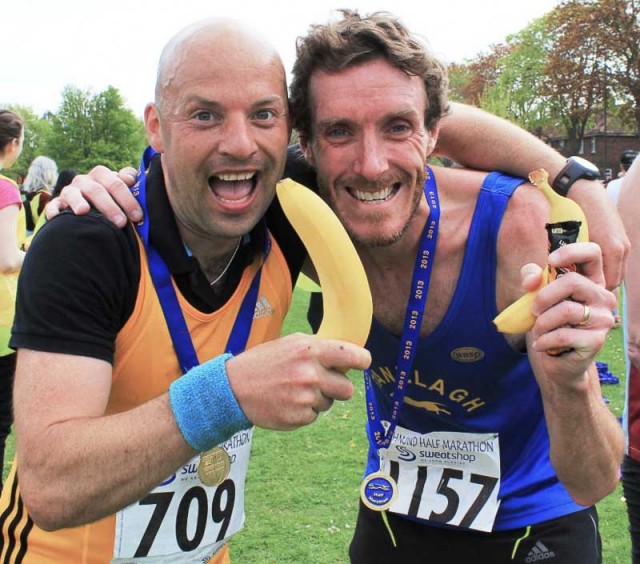 Stefan and David with their post-race bananas!! Photo: Rodney McCulloch

This run really worked me hard in the final miles and although I’ve not done and relevant speedwork as such lately I think my endurance and general leg strength from long bike rides certainly helped. After a very gentle bike ride home I then got my ‘nice’ bicycle out and rode just under 60 miles to my parents house for a celebratory BBQ!

For those interested, here’s my splits/heart rate graphs etc. over at TrainingPeaks.