OK, a sprint triathlon nine days after an Ironman race isn’t ideal recovery but I can only blame myself for entering this. Whether I’m tired or not it’s still going to be a little over an hour of hurt. A completely different kind of hurt to long distance stuff - it’s high heart rate puffing and panting type racing!

5:30am alarm, coffee, porridge (this seems to be the standard pre-race breakfast for me) and I was off on the bike for the easy 15 minute spin to the start. I got my bike racked and ready and after the 6:15am race briefing was able to stand around, cheer on support and chat with friends until my start (which would be sometime after 8am). 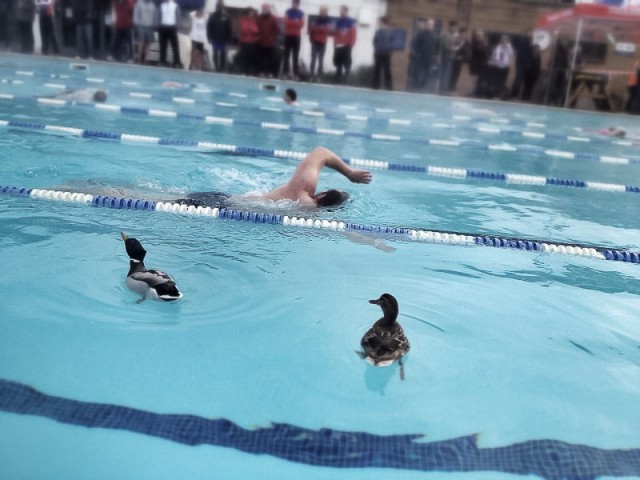 Spectators during the early swim wave.

At around 8:10am I was off. I’d previously estimated a swim time for 400m of 6:30 and this determines the order you start in. Ideally with other people of similar ability so there’s less/no overtaking in the pool.

I had a great swim and clocked 7:08 when I had left the pool and headed into T1. This works out at 6:42 for 400m pace (but does include a few seconds to get out of the pool and to the T1 timing mat). During the swim I passed two other swimmers - this is probably a first for me in these races. This also says that I estimated my swim time pretty accurately.

T1 is a quick affair. 49 seconds after entering the area I was out with my bike shoes on (I still don’t do flying bike mounts with the shoes already clipped in) and pushing my bike towards the mount point (T1 ends just as you enter the Hampton Pool car park and well before the mount line).

Onto the bike and let the fun begin! My only plan for today was to hammer the bike and try and destroy myself. The run would be… well, whatever it turns out to be in the end.

Conditions were pretty good today - temperature was ideal, blue skies but a bit of a SSW breeze was blowing.

I pushed hard. Then I pushed a little more. I overtook a few people fairly early on and then it got harder as the better swimmers (and potentially cyclists) are further up ahead. Eventually I caught up with a small group of three and managed to get past them. We then went across a roundabout and I heard some words behind me…

“Didn’t you do an Ironman last weekend? Are you sure you finished it?”

It was Deenzy - an aging man (I can say that as we’re in the same age group) who I see rarely (but normally at these races) and he’s on peak form right now. I wasn’t sure what I was doing going past him.

Well… he then came back past me and got ahead of me. Making sure that I wasn’t in the draft zone between us (as that’s not allowed) I pushed on using him as a reference point. Shortly after the turnaround at about 8.2 miles we had caught up with another group of cyclists and I decided to crack on with a big push. I got past the rest of the group and powered on towards the finish. Heading into the hell that is the roundabouts and speedhumps of Sunbury-on-Thames I just got past Nico (another local lad - note the word lad - he’s younger than me!) and we both raced to the finish (without any drafting).

I finished the bike leg with a time of 32:49 and an average of 24.95mph! This was the 7th fastest bike split of the day which I’m chuffed to bits with. Really happy. The fastest split was 31:21.

My previous best bike split has been 34:48 - so to take two minutes off is pretty impressive. This will be a combination of racing on a time trial bike (I’ve been on a road bike previous races) and also my ever increasing bike fitness.

As soon as I finished the bike segment you get up to (and no more than) seven minutes to get back to T2 (because of traffic lights and a right hand turn). This non-compete zone is lovely. I was absolutely shattered. 6 or 7 minutes to recover now!

As I got into T2 the clock starts ticking again and I ran in with my bike, racked it, removed my bike helmet and put my run shoes on - and then ran!

The run is always hard work - especially 5k. I had no idea how I’d feel on the run after my unbelievablytough run at Bushy parkrun on Saturday. I struggled and just got slower and slower as the k’s ticked by and just crept in under 19 minutes. I knew the antics of Ironman Lanzarote would be with me for a while but it really was tough on Saturday. This didn’t bode well for now.

Today I set off pretty hard and just wanted to keep up this pace. Within the first minute I saw a couple of friends (Stefan and Katrin) on their bikes who cheered me on which was nice. Starting the event in a later wave is great as there’s quite a few people out on the run course so plenty of people to chase down (or be chased down by).

I pushed on, overtook quite a few people and watched a chap come flying past me as what would no doubt be a superb run split for him. Funnily enough he did the fastest run of the day (16:26).

As I came to the finish I was well and truly spent. I crossed the line and my watch said 1:05:26. This time includes the ‘non-compete’ zone which I believed was probably five or six minutes (and would be deducted in the overall results). Surely I couldn’t have gone under an hour for the race. Only the fast boys do that.

I got a printout of my results and my overall time was 1 hour….. and 13 seconds. Doh! It was fantastic to put in such a good race to get even close to an hour but boy, only 13 seconds away. 13 really difficult seconds, that’s for sure. Maybe flying bike mounts and a fancy pointy bike helmet are needed.

My overall position was 10th (out of 337 finishers) and I finished second in my V40 age group. My previous best position overall is 12th and I believe 6th in my age group. I’ll take 10th and 2nd any day!

Finally, here’s an updated summary of my race times at the Thames Turbo Triathlons from over recent years…